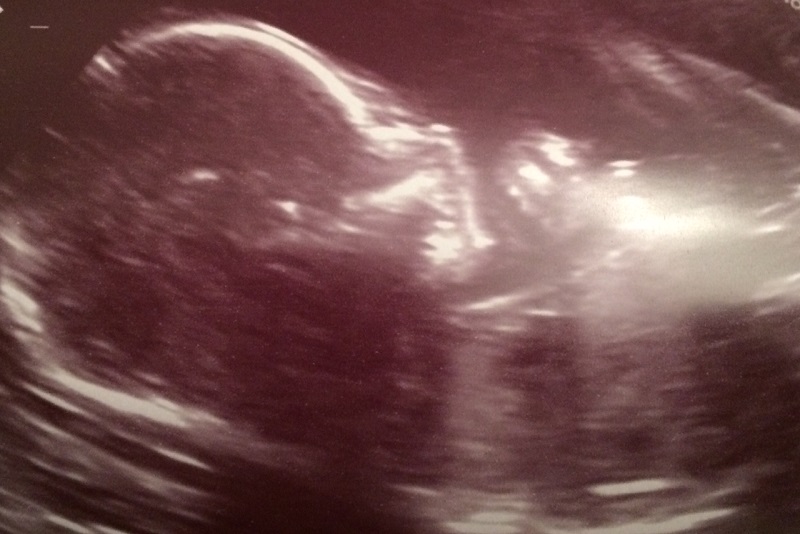 When we announced our second child was on his way, I vividly remember some people calling us brave for choosing to continue the pregnancy.

He’s seven months now and I still think back to their words and wonder whether we really were. To understand their reaction, we probably need to go back to the start of our ‘journey’.

Our first baby was very much planned, very much wanted and very much loved, even back when all there was to love were a few cells dividing quietly inside my uterus and a peed-on stick featuring a blue line. We were the usual ecstatic expectant parents. The pregnancy wasn’t amazing, I didn’t get the whole glowing second trimester experience and as we neared the end I began experiencing a range of symptoms including a persistent ear ache which no one could diagnose or give me any decent pain relief for. Eventually the decision was taken to induce and I gave birth to a perfect little baby girl just before 38 weeks.

Then things really went to shit. Over the next ten weeks we experienced so much it would take me a book rather than a blog post to share it with you. The basic summary is: unknown to me I had an underlying condition called anti-phospholipid syndrome (also known as sticky blood) which causes the blood to clot more easily. A small percentage of people with APS experience a trauma such as surgery, infection or pregnancy which triggers CAPS – catastrophic anti-phospholipid syndrome. This is where clots form so rapidly you experience multiple organ failure. At my worst, I’d just had a heart attack, was on a life support machine, kidney dialysis and was given essentially no chance of survival over one weekend unless I could be transferred to a specialist hospital. The team at the new hospital saved my life and when Alexandra was a couple of months old, I was able to return home. I was a slightly broken version of my previous self but at least I was alive.

Unsurprisingly, my husband – who’d had to fight to find a diagnosis for me, sit by my bedside while my organs stopped working and look after a newborn at the same time – wasn’t massively keen on having a second baby! He’d already got two daughters from previous relationships and after his third he was totally done. I was devastated but felt like the decision had been made for me by my condition. We had no idea if my heart would withstand a second pregnancy, stillbirth and miscarriage statistics for APS women make for grim reading and there was no way of telling whether I’d get CAPS again.

When I took a pregnancy test days after Alexandra turned one, I fully expected it to be negative and for my very late period to turn up just after. When a line appeared, then another line appeared on the second test, we stood in our bedroom looking at each other opened-mouthed. The feeling was crazy, all of the emotions rolled into one, all of the memories of our previous pregnancy surfacing, the word ‘shit’ appeared in my thoughts a lot. And yet we never once thought about terminating.

It was a question we were asked a lot, understandably, by family and friends. It was a question we would be asked by multiple doctors over the coming months – always with the caveat that even if we did continue the pregnancy if down the line I started showing symptoms their priority would be to try and save my life and what happened to the baby would very much depend whether we’d reached the 24 week mark.

That morning my husband went to work while I made frantic calls to my consultants and swapped my medication for baby-safe versions. I became that woman who has ‘high risk’ underlined multiple times on her maternity notes. And we never once had a talk about whether this was the right thing to do. I do remember Dylan telling me I was being far too positive when I started talking about Moses baskets and names at eight weeks. My reply then and throughout the pregnancy was that I had to believe there was a baby coming home at the end of it all otherwise I couldn’t mentally go through it.

As we got further along, and particularly when I hit the 30 week mark for some reason, I became increasingly scared. I lay awake so many nights, terrified I was going to die. I thought back constantly to the ‘brave’ remarks made by others and wondered if instead, we’d actually been incredibly foolish. If we’d rolled the dice one too many times and taken too big a gamble. There was utterly no way of knowing whether things would work out okay until around six weeks post delivery when the higher risk period for clots was over.

I was admitted to hospital at 32 weeks amid concerns my blood pressure was creeping up and I’d had a blurred vision briefly a couple of times. Those were some of the warning signs the first time round so there was a lot of talk of staying in hospital until the planned induction at 37 weeks and they weighed up each day whether they should just deliver him early. Each hour felt like torture. I started to convince myself that I was never getting out, that I’d never sit at home playing with Alexandra or sleep in my own bed again. The enormity of such a high risk pregnancy felt like it was engulfing me and I spent a lot of time on my laptop working and watching crappy Netflix shows in a bid to stop myself going completely stir crazy.

Eventually, they let me go home but two weeks later a scan showed baby’s growth had slowed down and the placenta was potentially starting to fail, so the induction was brought forward to that evening and two days later Max entered the world. He was born with his own set of health complications, none of which were related to or caused by my condition, and he’s had plenty of extra challenges to face in his first few months on earth. But he has well and truly filled the little hole in my heart which made me long for a second baby. I really don’t think we were brave, I didn’t feel like there was a decision to make. From the moment we knew I was pregnant, it felt like our only option was to place our trust in the medical professionals and hope to hell my body played ball and allowed us to bring our little boy home. I never felt brave on our journey: I felt scared, hopeful and even allowed myself to be excited at certain times. Now I just feel incredibly thankful that we did get to bring our baby home. So many people don’t get that chance once, let alone twice, no matter how brave they are.

Like this? Share it, and spread the MOLO love! You can read Harriet’s last blog Don’t Judge me Because my Baby Sleeps, or for the latest from The Motherload®, head to our homepage.

Owner of a toddler, baby and husband. Survivor of ‘Two Under Two’. Former journalist turned PR freelancer. I want to be Dolly Parton or Judge Judy when I grow up. You can read more on my blog and follow me on Instagram
Image credit: Harriet Ernstsons-Evans.