The Saga Of Signing Up For Swimming Lessons 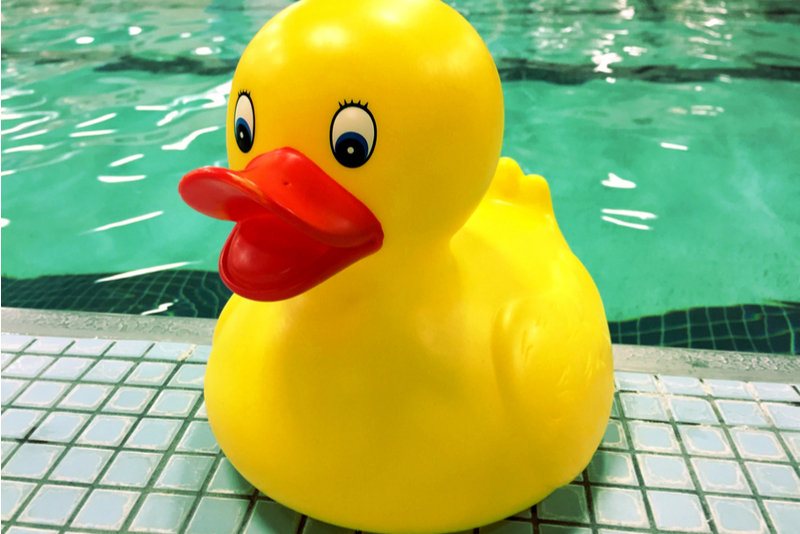 It’s 5.30am and I’m racing down the warren of deserted streets of Victorian houses, rain is lashing against the windscreen of my functional, family wagon. I stop at a red light, which seems to last forever. Come on, come on. I try and put the wipers on a more powerful setting but inadvertently turn on full beam, the indicator and settle on ‘one wipe if they feel like it’ mode. I burn down the driveway flouting the 5 mile an hour speed limit and shaking the daffodils. I’m not the first to arrive – there are four other “we gave up our dreams to breed” people carriers. This isn’t a good sign so, jumping out, I pull out a ball of M&S black pants from my left trouser leg, pull my hood up and make a dash for the glass doors.

There are four strangers in between two sets of glass doors, standing guard in their own corner of a glass box no bigger than a lift. The second set which leads into a reception area remains firmly locked. They smile politely but their eyes tell me that I am not to jump the queue, so I stand awkwardly in the middle before adopting a nonchalant lean. Nobody speaks, which is fine by me. I am so tired I feel sick.

Six more people appear like zombies out of the rain.

The glass steams up like a sleazy student night. “Is there a queue” a lady with sopping wet curly hair asks politely as she wipes steam from her glasses.

“I was here at 5.40am” booms an angry female from behind a pop up banner advertising pregnancy yoga.

We smile at each other in friendly agreement.

A young man in a polo shirt passes our glass cell, we look hopefully in unison like a Christmas advert for a Donkey Sanctuary, he takes one look at us and scuttles off. Fifteen minutes later a man resembling Mr Tumble appears:

“Hello everyone, are you here to sign up for the children’s swimming lessons?”

He asks as if addressing an auditorium full of people with severe hearing difficulties. Everyone nods enthusiastically.

“Okay what I need you to do is line up against this wall and wait to speak to Jenny at reception.”

Top marks for observation. Why else would we be queuing like lemmings at 6am? It’s not an X Factor Audition.

“Right, I’m sorry to tell you but there aren’t any parent and toddler class spaces left.”

There is a roar from behind the pop up banner of the glowing pregnant woman as a short power dresser of a woman marches over and squares up to Tumble.

“Excuse me? This is preposterous! My secretary called here yesterday and was assured there would be a space if I came down this morning.”

“We can’t guarantee anything until this morning… Madame?” He went up a little at the end, seemingly unsure if he was addressing a man or woman.

“Ridiculous” she spat and stormed out like the Covonia bull.

Tumble, who had flushed and was speckled red went on:

A cacophony of panic erupted in the twenty-strong line as we digested this news.

The back three walked away in quiet despondence. discussing how they were going to break the news to their families that Daddy had failed to get them into swimming.

I’m here for one of the three duckling spaces and I’m fifth in line. I’m in with a chance but it’s not a done deal. Come on, I do a secret fist clench. The man at the front immediately makes a phone call:

“Emma, is Arthur a Duckling or a beginner? Not yet, okay I will call you when I have a space. Yes I know. I don’t know. Not sure. No I’m at the front, I came straight here. Okay, yes. Yes. Yup. Okay, hold on.” He holds the phone over to a bewildered Mr Tumble:

Mr Sit-down-to-pee waits silently until the phone is returned and he can go and pay for his Duckling spot. I keep score; one down, two to go.

“Excuse me but Phinella swam in our villa in Mallorca but that was last summer and she just floated mainly, but very competently. Is she a duckling or a beginner?”

“She will be a Duckling.”

“Oh, I see.” The crestfallen pushy-mum moves to the desk and immediately starts clarifying which class Phinella should join.

One space left, two parents in front of me. This is close.

A Silver Fox of a dad is after an advanced spot, that figures.

The Boden-bob lady in front turns to me with a look of grave concern.

“My little one can swim a bit but only when we take him, he loves the water but he’s never had a lesson. I’m not sure whether to put him into beginners or ducklings what do you think I should do?”

“Oh I’m sure he will be FINE!  They keep a very close eye on them.” I say soothingly, supporting her in the decision she had already made, without any help from me, really. I am not an awful human being. I’m not.

I bound upstairs into our bedroom, drenched and waving my booking confirmation like Charlie Bucket when he found his Golden Ticket. “I’ve got her in, I’ve got her in!”

Super Dad opens one eye, turns over and resumes snoring. I slide in next to him and promptly book an appointment for a gel mani pedi on Sunday at 9.30am on my iPhone, just around the same time he will be waist height in a cold pool where hopefully no-one in beginners starts to drown.

Ten Sunday mornings of free-time is certainly worth one early start!