The Joy And Pain Of Imaginative Play 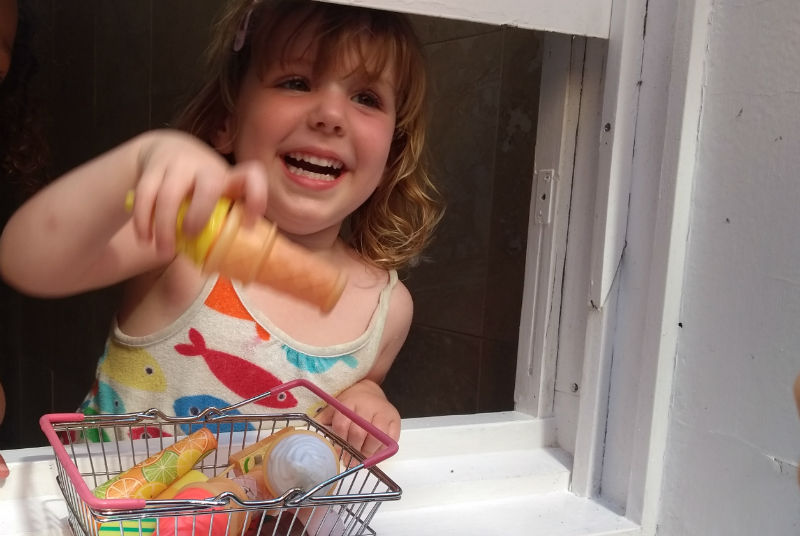 Some of the proudest and most beautiful moments I’ve had as a parent come from imaginative play; I remember the first time my then two year old son made me a cup of tea in his microwave (no judging please) and I beamed at how adorable it was that this little boy was acting out things he’d seen me do, and phrases he’d heard me say; he was practising for the adult world.

There was also the time both of my children were so engrossed in pretending that two babies were trying to steal our car and they were chasing after them, that they played uninterrupted for an hour. And I positively glowed as I watched the two of them blasting off to Mars in their garden chair rocket, waving goodbye to mummy as they embarked on their inter-planetary adventure. Then there was the time the bathroom window became an ice-cream van, and endless hours of My Little Ponies merrily galloping around and talking to each other in American accents.

Then something changed and imaginative play went from being something which I observed while marvelling at how charming and lovely it was, to something which I actively had to join in with. On a daily basis, my daughter would utter the words “you be the baby, I’ll be the mummy”.

We would spend the next thirty minutes with me being put down for naps, dropped off at nursery while she went to work, being picked up and taken home to the shed. She would explain things to me like I was a baby, or ask me to show her my “treasury book” (like the personal development books they have at nursery and school) and it was truly, truly adorable.  But I’ll be honest, after the first time, I began to panic a bit whenever I heard “you be the baby, I’ll be the mummy” because, well, I’m the mummy. There’s no escaping that. And being the mummy means I have shit-loads of jobs to do. So all the while I’m being dropped off at daycare by my miniature matriarch, my brain is racing wondering how soon I can bring the game to a close so I can get the washing in and sort dinner out.

I know, it makes me a terrible person.

Whenever I can, I try and palm it off on someone else “Oh Daddy wants to be the baby today!” or “Look, Kit is waiting to play with you!” or “It’s dinner time now, let’s play babies tomorrow.” But there are plenty of times when there is no excuse. Things which need doing can be put off and I agree to play. Imaginative play doesn’t come easy to a 43 year old but for half an hour I throw myself into the role of baby. Maisie/Mummy buckles me into our imaginary car and the moment she turns on the engine, I start demanding bread sticks and story CDs and ask “are we nearly there yet?” at three second intervals. We arrive at our destination and she magically turns me back into mummy. I’ll admit, that hurt – I thought I’d given a really authentic performance.

This kind of imaginative role-playing does have its uses beyond the entertainment value it has, as children often use it to work through things that they are finding difficult. So when my daughter was finding being dropped off at nursery really difficult and emotional we played that out in our game. She would drop me/baby at nursery and I would say I didn’t want her to go and I was sad. She would comfort me and reassure me that she would pick me up at 4 o clock. When I dropped her off at real nursery the next day, I reassured her in the same way and told her I would pick her up at 4 o clock. She strolled through the gate emboldened by our game.  It genuinely helped.

While the words “you be the baby, I’ll be the mummy” still make me wilt inwardly, I’m trying to understand the importance of these games and to appreciate the one-to-one time they give us, because I suspect like all things relating to childhood, this will be a short-lived phase. My eldest already prefers to get me to play his made-up board games rather than asking me to join him on an imaginary adventure, and soon my daughter will decide she doesn’t need me to be her playmate any more either.

I’m going to search a little harder for my inner child, and embrace this stage while it lasts.