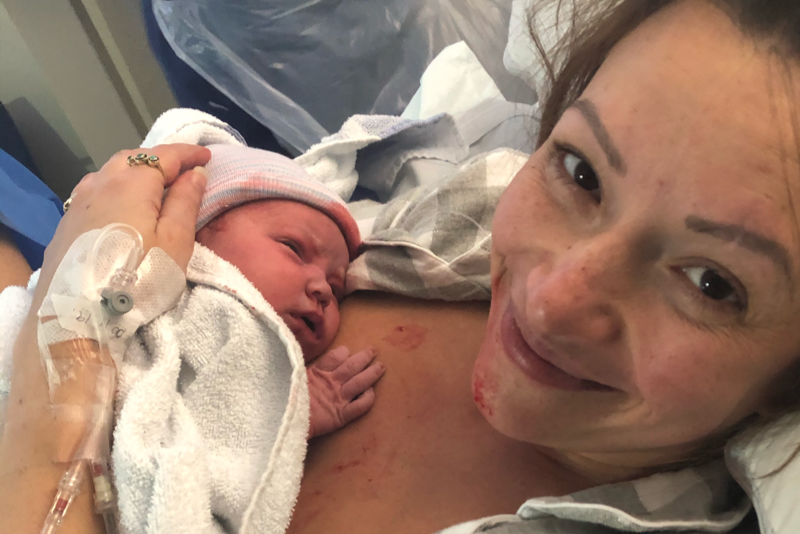 There must be so many of us. The Motherless Mums, doing our best to take on a role without the guidance from our own role models, and each with our own very personal experiences of what that feels like.

I lost my mum 20 years ago and felt like I was truly on top of my grief. Now, I have just become a mum myself and feel like it has opened a new hidden door of bereavement that I didn’t know was there. But it’s not an ugly or scary grief, it’s magical; I feel like I’m getting to know a side of my mum that I never thought I would meet.

After losing her to breast cancer when I was 11, “Mum” became only a past tense word; an ‘unsaid’ word only associated with a deep sadness for what I’d lost, or anxiety for what words I would have to follow it up with. Having to tell someone my mum was dead filled me with a numb dread, because I didn’t want sympathy, and I did NOT want to cry. Not in front of people. I was, after all, that ‘jolly, happy, jokey, silly kid’. I would always be told how strong I was and I became comfortable in that skin; and it became harder to admit I was sad. I was only 11, but all I could think was that I didn’t want to make others feel uncomfortable.

A feeling I haven’t managed to shift for 20 years.

The lump that appears in my throat when someone innocently asks about my mum in the present tense may have shrunken, but it is still there, and I still respond in the same excusing tone. Always apologising for making them feel awkward, rather than apologising to myself for having lost the most important woman in my life.

We were not a family of talkers after mum died, and so my dad, my brothers and I all grieved separately, rarely mentioning mum aloud. Looking back, I think we all in turn felt the need to protect the other, by doing anything in our power not to upset them; but inevitably, this probably caused more damage. We didn’t speak about her death, but consequently we didn’t speak much about her life either. It was all too raw and too painful, and so we shut off. For me, it felt like the longer this went on, the worse it felt, like mentioning her became sacred and I was so scared of the emotions it would uncover. And so slowly but surely, her name, “mum”, seemed to die too.

Getting on with life was my only tool for managing my grief.

Jump forward 15 years and I found out that I also carry the BRCA2 gene, which it turns out, runs in my family. It was the reason my Mum got breast cancer in her early thirties, passing away 10 years later. I was so scared and visions of mum’s battle came flooding back. The chemo, the surgery, the hair loss and weight loss and all those years of pain and sickness. I was told of my options for consistent checks and preventative surgery and I found myself putting a timer on my life. I thought I would need to have all of the preventative surgery as soon as possible, which would (and will eventually) be an oophorectomy and double mastectomy.

With that, my window to have children suddenly decreased rapidly.

I became obsessed with the thought of having kids as soon as possible. I was lucky to be (and still am) in an amazing relationship, but we were nowhere near that stage yet. I was also conflicted, as I even had people thinking I was selfish for contemplating having children, due to the risk of passing on the gene (judgement like this is unacceptable and perhaps something for another blog altogether). I waited a few years and I travelled the world alone for 5 months, with the mindset of doing all the things I knew I wanted to do before I had kids. But I was always conscious of this new biological clock I had set for myself.

We got engaged, we started wedding planning and we even stopped using contraception, but I could see that my other half was just being supportive and doing what he thought was right. He was not ready to become a dad, and in many ways, the timing wasn’t right for either of us. We were trying (or at least not actively trying not to get pregnant) for a few months but I think that the pressure I put myself under and the anxiety this caused was part of the reason I didn’t get pregnant. Or maybe it was fate, because one day my mother in law was watching a morning TV show and they had a guest on who had undergone Pre-implantation Genetic Diagnosis IVF treatment for BRCA2, and that was the start of our rollercoaster PGD journey.

It took a few years of injections, invasive procedures, hope, loss and trauma, but I eventually fell pregnant with our last remaining unaffected embryo. I was having a baby!

When I held her on my chest and was told she was a girl, I of course thought of my mum, it was so special. It wasn’t until a week or two after that it sank in that I hadn’t just ‘had a baby’, I had ‘become a mum’ myself. Some might think this is one and the same thing, but for me it was bizarrely a new feeling entirely.

One day, while I was snuggling my newborn daughter, I was overwhelmed with emotion. I was suddenly hysterically crying while holding my girl and it hit me from nowhere: I was grieving all over again. I wanted my mum and I wanted her to hold her granddaughter. I wanted her advice on breastfeeding, how to cope with the sleep deprivation and how my wounds would eventually heal.

I am so lucky to have some incredible and inspiring women in my life to talk to about all of this, but it’s not the same. I crave the familiarity of a mother-daughter relationship, where the love is unconditional and there are no boundaries. I wanted her to tell me her stories of when she first brought me home and her memories of my first months. For the first time in such a long time, thinking of my mum physically hurt; I felt the old cracks in my hastily repaired heart starting to break. One of my biggest regrets is never having the chance to really know her. I knew her in the way that any young girl knows their mum of course, but I never knew her as an adult. I would do anything to have got to know her real sense of humour, her naughty side, her uncensored side; to have been her best friend as well as her daughter and to have known what it was like for her to be my mum. She was only 44 when she died, and as I get older I realise just how young she was, she was only a little older than I am now when she was diagnosed with cancer. I feel like I missed out on REALLY knowing the best person I ever met, and yet I now feel very positive again.

The beauty and magic of it is this: having a daughter of my own, I now feel as though I have been given the opportunity to get to know mum all over again. I can imagine when she would have been doing everything that I do with my daughter, with me, and it engulfs me with warmth; I’m filling a void I didn’t even know was there. I ask her advice everyday, I think of her when I’m having a rough time with my baby and I can reassure myself that I’m doing okay.

After all, my mum was in no way perfect, but I still love her with every inch of my heart and still think of her as the best mum in the world.

My beautiful daughter is now 4 months old and I just celebrated my first Mother’s Day. “Mum” has been given a new lease of life; I just love the word. Finally it has been given the right to be in my vocabulary as a word of the present and future, not just the past. I feel unbelievably lucky, and I will never, ever take this fortune for granted.

If you’re struggling with the loss of a loved one, try the wonderful charity, Cruse Bereavement Care

First time Mum to the gorgeous Noa Laura. Adjusting to parenthood and making it up as I go, but genuinely loving it more than I could have imagined. Lover of the arts, dogs, gin and sunshine; I'm not a writer, but keen to jot down an honest account of all things 'Mum' and hope it makes for a good read during those long lonely night feeds or the very rare alone time on the loo :)