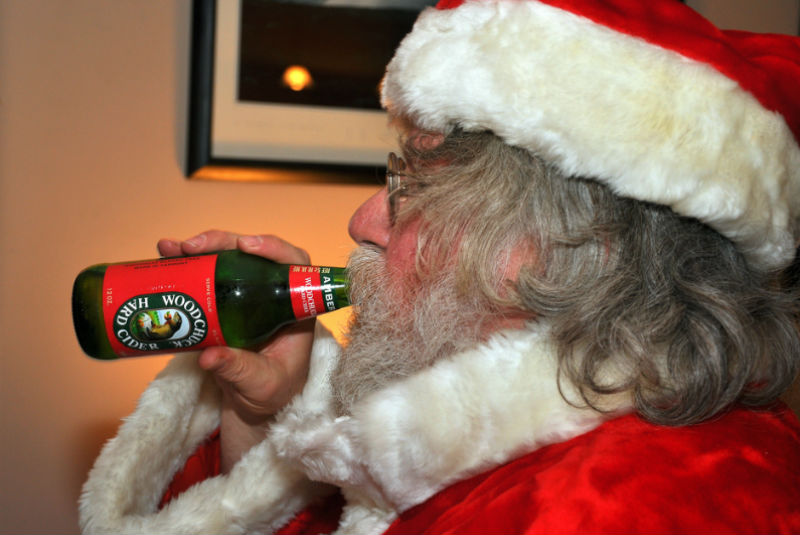 I love Christmas but it makes me a bit Karl Pilkington. Even the most enthusiastic of Christmas fanatics will agree that there’s a massive gap between festive expectations and Santa’s final delivery. Simple kindnesses get waylaid under a stampede of black-Friday commodity fetishist’s boots and more often than not, you run round like a glitter-caped superhero trying to make the children joyous.

January’s vivid memory is always the rotting wish bone in the we won’t collect ‘cause it’s a bank holiday wheelie bin.

1. You think your Christmas jumper makes a cosy retro statement but it makes you look like a plump, mohair-wrapped twat.

2. You sprinkle reindeer dust on the drive with your children on Christmas Eve to light the landing strip for Santa, only, it rains overnight, the glitter blows away and there are clumps of porridge on the pavement until late February.

3. Christmas Eve, after all the gurn-inducing preparations, you’ll enter the lounge sporting your ‘come to bed’ eyes and a bottle of Jack Daniels but your partner will ask ‘Is there any Sellotape left, I need to wrap yours now’ and he’ll disappear upstairs for two hours leaving you shivering in your reindeer-print cami with a vandalised mince pie on your lap.

4. Santa Claus in the grotto always looks like he’s been involuntarily forced in to a voluntary community service role to balance out a former burglary. He’s clearly never raised (or even spoken) to a child and his fake beard stinks of skunk, plus there’s a king-size spliff stuffed in his fur-trim pocket. He pointedly asks if mummy wants to sit on his knee because he seeks power through the innuendo of kid-speak. Something about his manner with children makes you want to speak to the manager about his enhanced CRB check.  NB. Your children will never get a decent gift from one of these disorganised jokers.

5. You look forward to Christmas dinner for the best part of the year and forget that it’s a glorified Sunday roast, only so much drier that you need to relay-drink courses of wine in between bites. The reindeer/Santa/Nativity table-top decoration you spent £30 on will get shoved on the window sill before the guests see it to make way for trays of dehydrated parsnips. There’ll be food you bought that you forget to use. Nice stuff like dauphinoise potatoes and soda bread.

6. Pulling a cracker. The paper hat is the forlorn metaphor for a loser.

9. Christmas Sex. Falls in to one of two categories: festive filth or a good-will promise. If, like me, you get turned on at the thought of Saint Nick’s hands clutching his hessian sack or Nigella Lawson’s classic Solstice Special, the one where she pummels birds with her rosemary-infused oily fingers, if that sort of thing really gets you going then you’ll try Advocaat for hand-job lubricant. You’ll try walnuts as organic love eggs. You’ll even give S&M a crack using the astringent properties of cloves. Sadly, this randy enthusiasm always expires, Cinderella style, in the amber dawn of New Year’s Day when you wake up convinced your period’s 3 days late and you haven’t paid for the (existing) kid’s presents yet. Alternatively, the good-will sex promise is merely oven-baked air. You intend to give your loved one a blow job after a) the work’s xmas do b) Christmas Day lunch following the family bust up or c) on Christmas Eve when the festive prep’s done. You will actually be a) too inebriated to pay for your taxi b) too busy ringing your dad/gran/sister on speed-dial to yell ‘and a bloody ‘nother thing!’ c) too worried the kids will blunder in looking for Santa only to find Mrs Claus on all fours gumming daddy.

10. The time to give, not to receive. Rein the lectures in, Dasher. There’ll be a friend that says ‘OMG, you shouldn’t have!’ when opening your handmade photo album which took all year to compile with much covert snapping and you’ll want to say ‘OMG, but you should have, you thoughtless clunt’ at her Boots 3 for 2 bath essence (containing the one botanical extract you’re allergic to.)

11. Games. Your dad staggering around near your vintage china plate dresser pretending to be George Bush with a golf club. Your brother in law arguing that it couldn’t be Miss Scarlet because she was accounted for at precise time intervals in police records. Your son bawling because he acted out reading a book but his nanny said he was carrying a watermelon. Disputes over people nicking fake bank notes. Pie Face. Loads of barely concealed face-ejaculation jokes. Wrecked carpet you’ve waited a decade for. Your sister announcing she’s shit at games and resuming back-step smoking even though she quit in 2010.

12. New Year’s Eve. The only new thing about it is the extortionate outfit. The pub admission prices: a mockery. There’s eye-contact rivalry at the bar just to get a plastic cup of warm wine. There’s ‘I’m sorry, darling’ middle-aged men who still haven’t worked out that grabbing your tit by alleged accident still qualifies as assault, Christmas or not. The £70 a head a la carte New Year meal leaves you feeling really hangry. A 1am realisation that there’s nothing revolutionary about you or your resolve to get fit or earn a big-enough salary to afford those lunch pots containing butternut squash and orzo, and that chilly sobering will face-plant you in to the stark light of January 2017.

Like this? Share is and spread the (festive) MOLO love! For more brilliant blogs, head to our homepage.