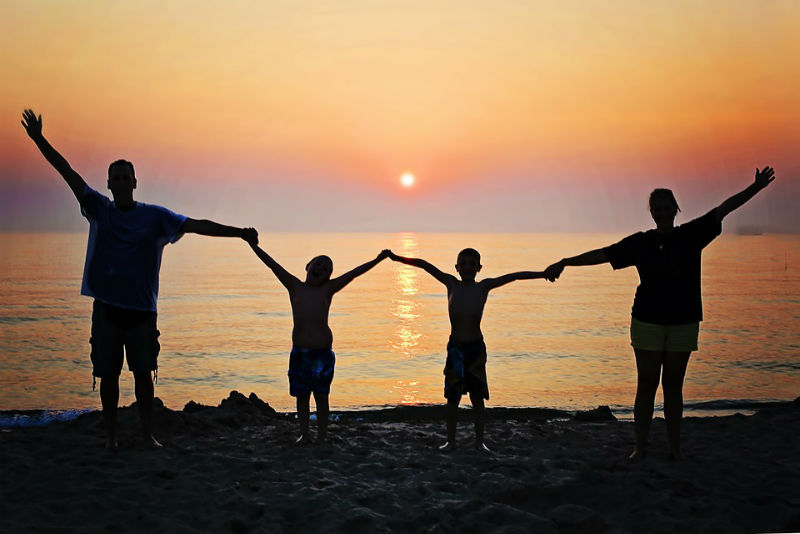 After welcoming baby number two in April, and seeing as he’s a pretty laid back kind of a guy, we thought we’d brave a late summer holiday.

We found that First Choice have kids’ clubs starting at age three, so booked the first flight after Toddler’s third birthday out to a family-friendly resort in Greece. Having taken Toddler away just before Baby’s arrival we thought we’d all have a lovely time. You know, like you see in adverts, where everyone looks refreshed and happy and the kids are having All Of The Fun.

It was not like that. Here are some of the times I realised it was The Worst Idea to have gone away…

1. When Toddler deliberately kicked my G&T over me on the plane

In his ‘defence’, his favourite thing to do is mimic his baby brother and it’s pretty cute at times. This time, Baby had jolted me and made me splash my drink; no big deal. Toddler fixed this by kicking my drink squarely out of my hand and all over my lap. Luckily Daddy hunted down the flight attendants and provided remedial prosecco.

2. When the room partition proved worse than useless

Maybe you’ve seen the sort of thing. We paid extra for a room divider that went up to about 50cm from the ceiling, with sliding doors. So in theory creating a separate room but in practice every single sound travels both ways. As Baby is still feeding at night, he was in our section and we put Toddler to bed in ‘his’ room. Which he was really excited about. Until we slid the door closed. When he decided he couldn’t possibly sleep in there on his own. Eventually the solution was for Daddy to take the other twin bed in there. Leaving me with the double to myself. (That bit was a win, at least!)

3. When it proved impossible to handle the sun

I’m very responsible about the children in the sun – covering, sunscreen, avoiding in key hours, all that stuff. This meant that, despite Toddler’s huge love of swimming, I rationed his time in the pool (it was 25 degrees and clear sun most of the week). Even so, he still managed to come out of the pool and develop a red face a couple of times. I felt like The Worst Mum (even though it always faded overnight). 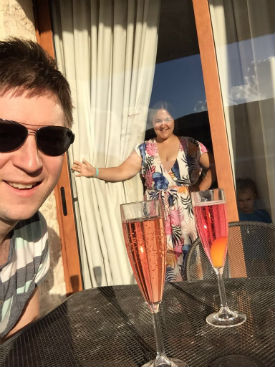 4. When Toddler awoke from his nap, channelled Jack Nicholson in “The Shining” and photobombed us

There are three of us in this photo; only two of us are having a lovely time!

First couple of goes at kids’ club were huge successes. We had two hours with just Baby, Toddler was safe and entertained and had a good time. The definition of win/win! But. Being such a rational creature, as toddlers tend to be, he decided later in the week that, nope, not happening. Cried and wailed and clung to me like a limpet. I went in for 10 mins to help settle him but he wouldn’t let me leave so we both got kicked out. It was a crushing blow as good grief I needed a nap. The bigger kick came a couple of days later when I realised that they do let you leave them if they cry (so long as they calm down quickly) so I should have done that and he would have been fine. Oh, the naps I could have had…

6. When Peppa Pig was on every night for the beginning of the entertainment

Because, y’know, we don’t see enough of it at home.

7. When we got home and Toddler didn’t want to sleep alone

Having spent the week cosily rooming with Daddy, the thought of sleeping solo was not one Toddler was relishing. So he let us know, by howling. Loudly. Incessantly. At 2:30am. Waking our neighbour. As I write, it’s five days since we came home and we’re still not quite back to normal with bedtime.

Of course it’s not all doom and gloom!

Okay, there were challenges. But in the interests of balance I’ll just share some of the moments it was bloody brilliant:

And now the washing is (just about) done, the suitcases are (largely) unpacked and the dust has settled, I find myself wondering whether we will go away again together next year. On balance, I think I still would. Just so long as my drinking hand isn’t within kicking distance on the plane…

Like this? Share it, and spread the MOLO love! You can find Lisa’s last blog A Letter to my Brave Boy and for the latest from The Motherload® head to our homepage

Lisa is mum to two boys. When not wrangling children she works in fundraising. She can be found on Twitter for periodic fundraising / mumming / nonsense chat. Fuelled by tea and the occasional (ahem) gin.