A Sheep in Wolf’s Clothing 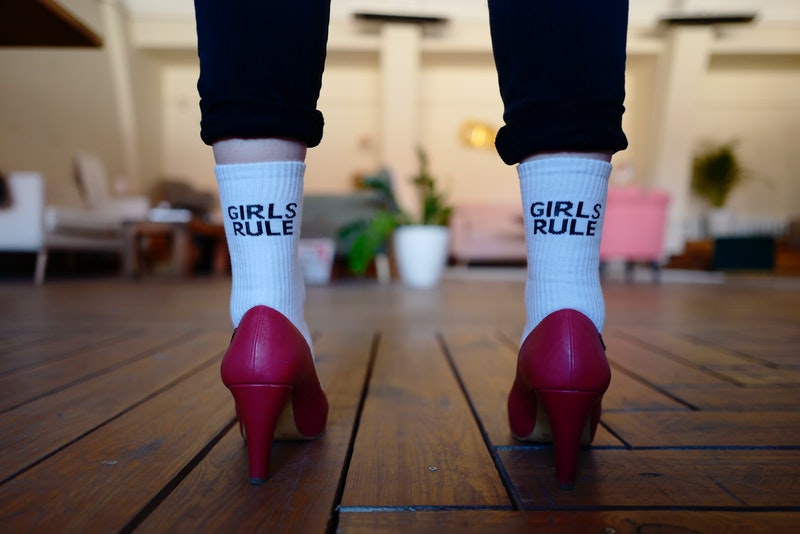 Is it anti-feminist, or victim-blaming to worry about your teenage daughter wearing revealing clothes?

I ask, because I posed a question on The Motherload® Facebook group which sparked a debate which made me question myself and my attitudes.  I was concerned about my 15-year-old daughter’s clothes choices, I thought the tiny outfits were inappropriate for her age and that she was putting herself at risk.

While in some of the replies, women empathised with my anxiety, others suggested I was victim blaming and being anti-feminist.

I had said I was worried for her safety, and that word came up repeatedly in the comments. The safety of my children is of paramount importance to me (I’m sure you feel the same). That’s one of the reasons I don’t like my five foot eleven, blonde, naïve daughter going out in the world wearing next to nothing.

For those who said I was victim-shaming, I was once her. I first became aware of men staring at me in the street aged ten. I was cat-called countless times before I started my periods. I was leered at, groped, terrified by men honking horns and slamming hands against car door as I walked down the street. This still happens to me now.

It didn’t matter what I wore, that much is true. Being female was enough for meatheads to tell me they noticed my existence – but it was more frequent and more sexual in nature if I was wearing a short skirt or low-cut top.
I know none of this was my fault, but don’t try telling me that it’s not frightening and intimidating. I don’t want that for my child.

I am fully aware that an abuser will abuse, regardless of what a person is wearing. I have read the testaments of rapists who say that opportunity and availability are the biggest factors. A scarf or a ponytail they can drag a woman by are more tempting than a revealing outfit.

I know this, but it doesn’t stop me wanting my child to wear less revealing clothes. It’s not just grown men I’m wary of. There are boys at the parties she attends who don’t have the maturity or experience to know that a girl’s outfit is not an invitation. Have you forgotten the power of hormones at that age? I haven’t.

I’m not suggesting for one second that the majority of young men are lecherous fools who can’t control themselves. Most I come across are feminists themselves (well done their parents!) but that yob screaming from a car window was once a youngster and if he doesn’t respect women as an adult, what the Hell was he like as a testosterone-driven youth? Sadly, those Neanderthals still exist.

For those who suggested I was anti-feminist, I have been fighting for the rights of women since I’ve had a voice. The sexual harassment I’ve suffered hasn’t stopped me from wearing what I want, and it never has. My daughter will always wear what she wants, as long as it is appropriate for her age and circumstances. She is a child. She is below the age of consent. The clothes she wants to wear emphasise her breasts and barely cover her bottom and I think I have a right to be concerned about that. I am not anti-feminist in being aware that someone who is still actually a child can look sexually mature in some clothes.

For those who say I should talk to my daughter about why she wants to wear those clothes, I’d like you to see her roll her eyes when I bring it up again. We talk about Instagram, celebrity culture, peer pressure, the sexualisation of children We discuss who she wants to impress, what boys expect from girls, how she wants to express herself and be perceived.
She is adamant that none of these things influence her. She just wants to wear what she wants to wear, which just happens to be the uniform of the day, because all of her friends are wearing the same sort of thing. She doesn’t want to be different. Who does at that age? I get that.

I celebrate the fact she has body confidence. How wonderful to feel good enough to want to show your body off!
Most of all we talk about how her body belongs to her, about consent and the decisions only she has a right to make. She is feisty and strong and I have no fear that she is capable of making her own choices and having her view heard.
But it’s not just about her, is it?

As one wise MOLO said, ‘I don’t put my children in car seats because I think I’m going to have an accident. I do it because there are nut jobs out there.’

My worries about what my daughter wears are my way of putting a seat belt on her as she drives through this inequitable world. Of course, I wish all drivers were careful, courteous and kept within the speed limits, but I’m long enough in the tooth to know they’re not.

I am not trying to make her cover up at least some of her beautiful body because I am a prude, or dictatorial, anti-feminist or a victim-shamer. I am just a mother in an imperfect world trying to keep my daughter safe.