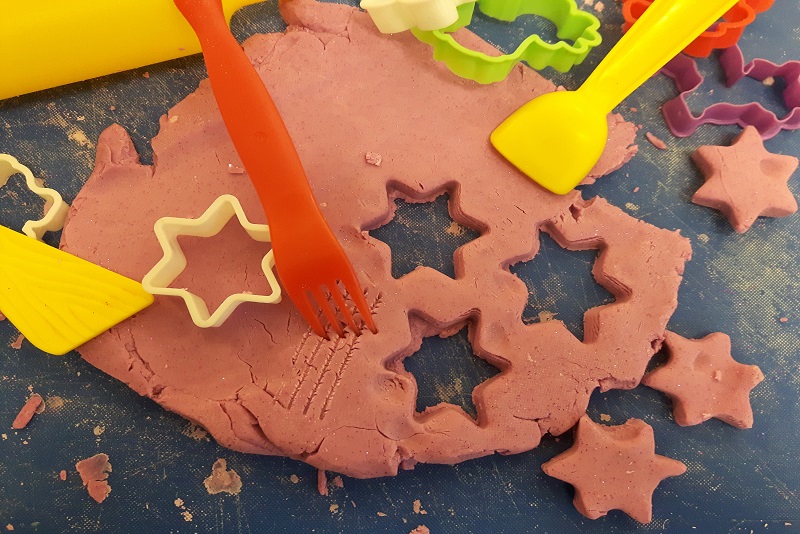 Your first question about making playdough may be why on earth would you bother when you can just buy it? You have a valid point. The squidgy stuff isn’t hard to come by; you can just grab a pack at the supermarket with a few tubs of various colours, throw it in the trolley next to the wine, job done.

I will admit the shop-bought stuff did give me a whiff of nostalgia when I took the lid off; it has this strange, sickly-sweet, intoxicating smell that takes you back. Home-made playdough doesn’t have that particular pong but you can add whatever you want to make it all fragrant.

The “add whatever you want” rule appeals to me. I know exactly what is in it when the baby inevitably shoves a blob in her mouth and starts chewing before pulling a face and spitting it out but I can also make it whatever colour, texture or scent we want. I haven’t been very adventurous yet; the latest batch has some food dye and glitter mixed in to make it purple and sparkly but you can let your imagination run wild and stir in all manner of ingredients from sequins to seeds and herbs.

You may now be thinking I am one of those perfect Pinterest mummies who makes everything from scratch and has the most amazing, creative ideas spread out over the table on a Cath Kidston oil cloth. I am not that woman. I wanted to be her before I realised what motherhood is actually like and how exhausting it can be just to do the basics without making extra work for yourself. There is also a realisation that when you’re only playing at parenting as in babysitting someone else’s children, you have more energy and enthusiasm to enjoy it all but when looking after small people with short attention spans is your own proper 24/7 life it can get a bit boring.

I like to feel a smug sense of satisfaction sometimes though, so short blasts of meaningful activity tick that box, whether that is getting the paints out or filling a plastic box with play dough we have made ourselves. No sense of guilt reaching for the remote to turn on the telly after that.

How To Make It

I found this recipe for making playdough on a brilliant website called The Imagination Tree which is run by a mum of four called Anna who is very clever and crafty and an early years expert. The ingredients are all cheap and easily available, most of them in the baking aisle.

Up to 1.5 cups boiling water

My 4 year old daughter climbed up on a chair to reach the worktop and helped me measure out the flour, salt and cream of tartar into a big bowl then dolloped in the oil. I put the boiling water in a glass jug and dropped in the food colouring then let her stir it up to see it change colour. You can add as much as you want depending how pale or vibrant you want it to look.

Dribble the water into the bowl a bit at a time, stirring until it all becomes really sticky. You might not need all the water. A few drops of glycerine is optional but it helps make the dough nice and shiny. When it has cooled a bit, take the mixture out of the bowl and knead it as if you are making pizza until all the stickiness has gone. You can add more flour to get the consistency just right. Now you just need to store it in a tub with a tight lid to stop it drying out and that is it. Easy peasy; it takes minutes and will last for months.

What to Do with It

We have an old chopping board and a bag of accessories to go with the playdough. You can prod and poke it with your fingers, pound it with your fists, score it with a fork, flatten it with a rolling pin, stamp out shapes with cutters, whatever you want. We usually end up having a mini Great British Bake Off with trays of tiny biscuits which would be almost appetising if they weren’t lilac, salty and over-handled by small, sweaty palms.

Kids and Grown Ups Love it So

There is actually something really therapeutic about playing with dough; it reminds me of scrunching a stress ball or fiddling with melted candle wax. There are times when I would just rather switch off the adult world and be a kid for a while. Take this week when the news is full of the US election and a man called Trump is about to move into the White House; forget politics, I choose playdough. In fact, with a little bit of orange food colouring, I could create a slimy substance rather reminiscent of a certain someone, now that really would be satisfying to pummel after a hard day.