My Baby, the Dummy Addict 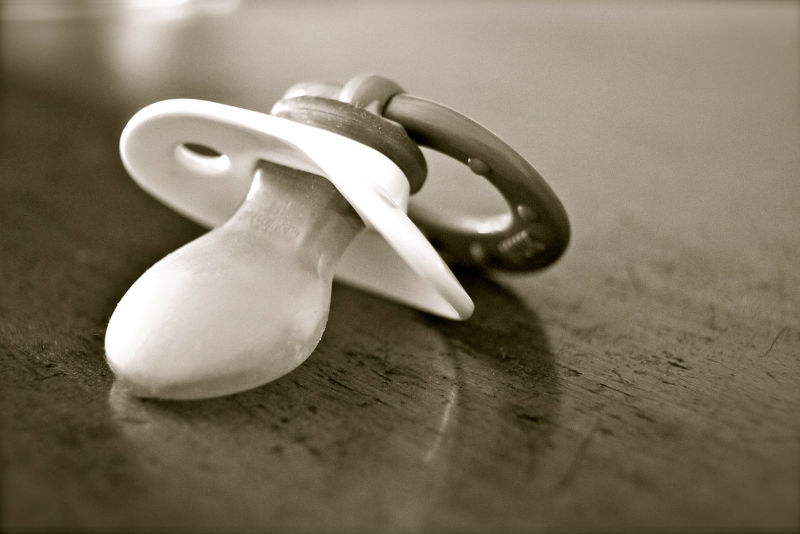 I confess: my child is a dummy monster.

For the first eight weeks of their lives, my twins didn’t have dummies. I wasn’t strongly against them, but I was vaguely curious to see if we could get by without them. It just seemed like another thing to have to take away later on, and I had all the usual worries about later effects on their teeth and speech.

But once we started leaving the house more while they were awake and alert, I suddenly found myself pushing around two crying children. I would watch other mothers pushing their babies, who were quiet and content in their carrycots, and I wondered how they did it. What fancy magic were they using?

So one day I gave them dummies. Suddenly I was one of those women pushing quiet and content children in their carrycots. The fancy magic was a dummy, and it changed my life.

But now, here we are over a year later, and one of my boys is absolutely addicted to dummies. He loves them. If he sees one, he fusses and flaps his hands until I either give it to him or successfully distract him. When his brother takes a toy from him, or he isn’t able to cuddle me, he throws himself to the floor and sobs and wails. His tantrums can go indefinitely, or until he has a dummy. If the boy could make dodgy deals on street corners with dummy dealers, he would do it.

A few months ago he started waking in the night. He wasn’t upset or hungry. He was just awake. And he wanted company. We spent hours sitting next to his cot, desperate for him to sleep while he chatted, laughed and clapped. There really is nothing more disheartening than sitting in the dark at 3am, counting down the hours until you have to get up for work, wondering if you will ever have a full night’s sleep again, thinking that just maybe your child has dropped off, only for him to giggle and applaud.

After a few seemingly endless nights, my husband discovered that if we gave him a second dummy to hold, he would sleep. So now the one dummy has become two. Not all the time, but he goes to bed with two and he is generally at his happiest when he has two. Two means that he can have one in his mouth and the other to hold, or put inside a box, or drop down a ball run, or put in my mouth, or hold up to his eye like a superbly ineffective monocle.

But this dummy situation has left me stressed. At first I’d said that we would get rid of them before they were a year old, before they could remember them. But they still woke so many times in the night, and it felt like the dummy bought us a bit more sleep, so we postponed. Now I plan to get rid of them when the boys are two, and until then I’d like to limit their use to when they are asleep. Excuse me while I laugh heartily at that idea. For as much as I claim that I want to limit dummy use, I am petrified of the idea. I don’t know how I will stop tantrums without dummies. I don’t know how I will keep them happy in the car. I don’t know how I will calm them both at the same time.

I try to take their dummies away when I can, but I’m quick to give in when their happy faces twist into masks of surprise and betrayal and they whimper and pout. I hide dummies when they aren’t needed, but they are always accessible – tucked away in my pocket, under a muslin in the changing bag, or stashed behind the picture frames on the windowsill – just in case. When both boys crashed after a Pancake Day-induced sugar high, writhing on the kitchen floor, kicking and sobbing, I reached for the dummies.

I guess I’m just as much of a dummy monster as my child.

Like this? Share it and spread the MOLO love! You can read more of Rebecca’s fabulous Motherload blogs here, or for the latest from The Motherload®, pop over to our homepage

Rebecca is an American living in England. A mother of twin boys, she used to enjoy baking and gigs but now spends most of her time singing nursery rhymes and answering the same damn questions from strangers over and over again. She is a part-time secondary school English teacher. You can also follow her on Twitter