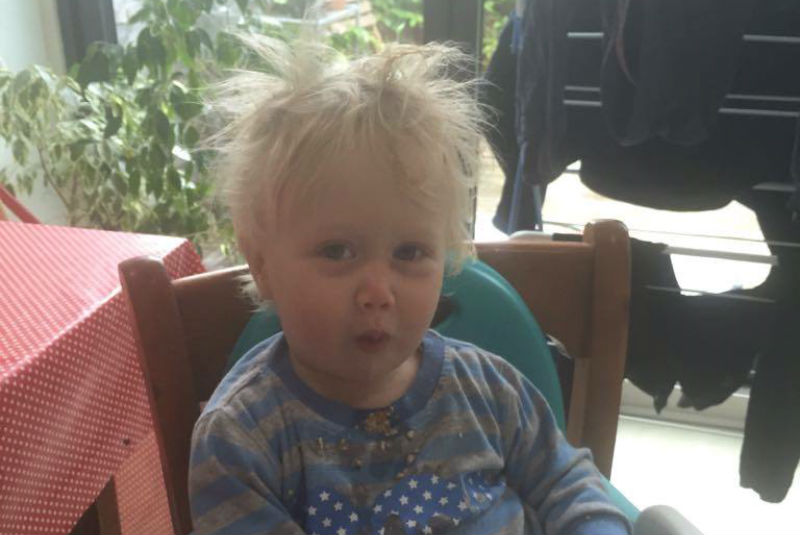 So, what do you know; BoJo has thrown his toys out of the pram and quit the Tory leadership race. It’s funny, because at EXACTLY the moment I saw this unfold on the news, my toddler had a mega tantrum because she stuck her finger into a Playdoh rolling pin and ended up lobbing it across the room. And it struck me: Boris Johnson and my Toddler are basically THE SAME.

Their Hair is Mental.

It’s a good, but obvious place to start, admittedly. BoJo’s bonce is as infamous as the man himself, and even boasts its own Twitter account. Messy, uncombed and faintly ridiculous, it’s exactly the same as my two year old’s when she wakes in the morning after performing 180 degree flips and turns in her bed an thousand times. (Not that we can imagine Boris doing an ‘about-turn’, of course). And as an added extra, haven’t all toddlers been subjected to a Boris Bowl Cut at some point or another?

If Near Water, They Are Going to Get VERY Wet.

Puddles. Jeffing PUDDLES. They are the bane of our lives, because as a parent you KNOW that as soon as your little darling spies a small patch of water on the pavement, it’s only a matter of time before you are going to be wrangling a slippery, screaming and shaking mini-you. Thanks to the amount of pot-holes in the roads and pavements (that of course, is Boris’ bloody fault as well), what, on first appearance can appear to be an innocuous dribble, CAN in fact be shoulder depth for a two year old. And this is somewhat similar to that rather remarkable occasion in 2009 when Boris fell into a river, down his own pot-hole of luck and emerged spluttering and scampering around for his footing and a strong hand to help him up. I bet that person bloody regrets it today.

I have literally worn my voice out asking my toddler to please share and please take turns and please please don’t push the other kids over when ‘playing’ games with others. Toddlers just don’t get that they can’t just shove another kid in the chest because it’s their train, or their go, or their ball. Ah, yes! Their BALL. On a 2015 trip to Tokyo, Boris was invited to take part in a game of rugby where obviously, the press gathered to take a shot of Boris gently getting involved with a try or two. Ho, ho, ho. I don’t think anyone anticipated Boris’ inner toddler taking over with such aggression that he knocked over and flattened a poor ten year old boy who thought he was having a nice little exhibition match with the Mayor of London. But at the least the silver lining is that my toddler appears to be much more socially adept than a 52 year old Eton-educated grown-up.

They are Creative with The Truth, and ‘Facts’.

My two year old has enormous eyes and she uses these to great effect when attempting to convince me that “chocolate is GOOD for me Mummy” or “the cat LIKES being held upside down” or  “I didn’t flood the bathroom with water”. You know as a parent that there are always going to be moments where you have to put on your stern head-teacher voice and ask FOR THE TRUTH while they ramble on, trying to worm their way out of the mischievous story that they have woven. What a bloody shame we can’t do that with Boris, after his epic ‘white lies’ during his carelessly constructed Leave campaign. £350 million for the NHS! We’ll have great trade agreements and do what we like while closing our borders and maintaining our independence! We’ll do away with unelected bureaucrats! WHOOPSIE Boris. You told some porkies, didn’t you? Only this time, instead of one fraught Mummy needing to wade through the bullshit, it’s 17 million people who are rightly feeling downright irked, misled, by Johnson’s minimal grasp of detail and downright untruths.  It’s crossed my mind, that when preparing for the EU Referendum, that Boris must have taken wise, sage advice that only a two year old might be able to proffer.

They Don’t clear up their SHIT.

Toddlers make an enormous amount of MESS. Any ordinary day starts beautifully calm and positively, and before you know it half an hour has gone and the entire house looks like a bomb has hit it. So as a responsible parent, you try asking the Toddler to ‘please tidy up, just a little bit, look – like Mummy, that’s it, well done, just one more’ and… before you know it, they have scarpered, off grinning wildly, to go and create devastation elsewhere. Today, 30 June 2016, is the day that Boris left the proverbial playroom in an utter shit tip, raised his hands in the air and with a pouting lip declared “I NOT DO IT. I NOT DO THE TIDY UP” and basically fucked off, out of the Tory leadership race, which was the whole bloody POINT to us being in this shit-fest in the beginning and ran off, leaving his Mummy (Teresa May) to clear up those little bastard pieces of Lego that everyone is about to walk on and start howling as they lie crippled on the floor.

Will SOMEONE PLEASE send Boris to the Naughty Step until he says sorry to the ENTIRE UK for monumentally fucking everything up?!