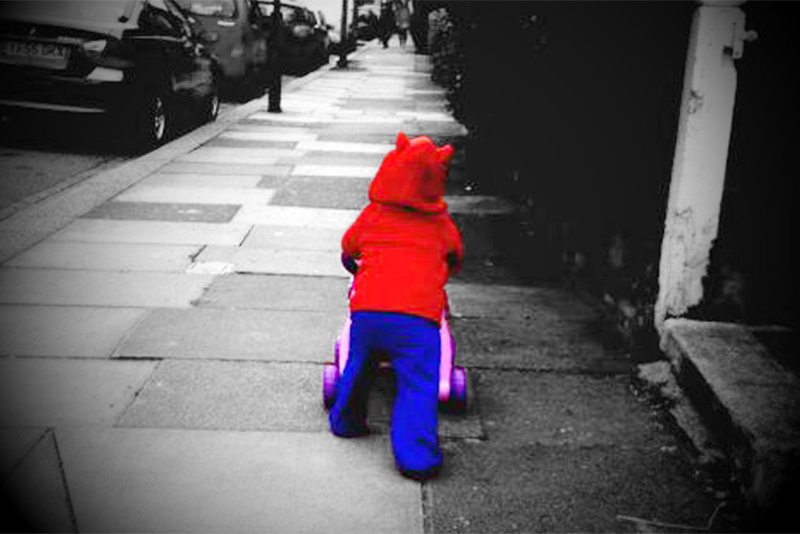 It hit me like a karate chop in the throat as I walked in the winter sunshine, one hand on the push-chair, the other holding the phone to my ear. My baby was pointing at things and grunting for me to wheel her over to explore them, but I was busy making The Call.

I hear my voice saying ‘oh she’s so lovely at the moment, into everything, standing up, cruising’.

Then ‘I can’t believe the year is over and it’s this time again’.

Then it’s just me and my baby again… What am I going to do without you?

That’s when it hit me, but it’s been brewing for weeks. Sentimentally mooning over your soft, fluffy baby hair, your pudgy little neck, your soulful blue eyes, so full of questions. The tears at bedtime were mine now, not yours; I can barely make it through ‘Peepo’ without my eyes blurring at ‘and a mother with a baby, just like him’.

The pressure to enjoy every moment, every last scrap of our special time together, the joy tinged with sadness, and the sadness even sadder, because it’s laced with the knowledge that we should be having fun, or at the very least be bathing in the euphoric glow of one another’s company, like that formula advert where they’re in a white room with a lovely bay window and the mum is really slim and has absolutely no snot, dribble or puke on her jumper.

Of course it hasn’t been just us for this last eleven months. Sure, we had three mornings a week to ourselves, napping, feeding and watching Netflix at first, recovering from the busy nights. Nowadays, we are making music, reading stories, singing songs, crawling up the hall and trying to pull the wi-fi router out of the wall.

But the rest of the time there was a whole other small person by my side, the prototype, number one, the big brother. A fragile and new dynamic as he had to make room for you, the interloper. Mostly happy – possibly due to the trampoline you bought him when you arrived – but not always, sometimes needing me so much but being told to wait, to share, to be patient.

The scar is faded below my still-soft belly, the place where you lived for those closest months. Can it really be almost a year since I brought my newborn home?

Perched on my shoulder, hidden in a sling, feeding you at the table while I tried to cut Plasticine shapes for your brother with my spare arm, saying ‘gentle…’ at least 800 times per day and still your head got poked, your arm got yanked, your cradle was rocked rather too vigorously. But you didn’t mind. Slotting into our family, and yet carving out your own space.

There were times when I thought I couldn’t do it, when the nights were so exhausting and the days were so awful. Breast-feeding/internet shopping all night, chasing around a feral toddler all day with a newborn attached to my boob or strapped to my chest; ‘No! Don’t drink from that drain cover’, and ‘Put that barbecue lighter fluid down!’

Time shouldn’t fly when I spend so much of it awake, keeping two small humans alive and safe and fed and happy, but it does, it races by faster and faster until the days just flick by and when everyone’s asleep, I regret wishing the day was over during the 5.10pm dinner-time meltdown.

Now it’s you who’s making mischief, jumping on beds, accidentally eating the contents of your brother’s potty, and wriggling like a two stone serpent with a bowling ball for a head at bedtime.

But none of that matters when I look down at your round cheeks, your small, sleeping face as you feed, and I wish I could keep you as a baby forever, needing our closeness, my milk, letting you sleep on my chest, like when you were tiny, for old time’s sake.

And that’s it. We’re nearly done. I’m writing the list that I will give to your nursery so they can try to know you as well as I do; she is very adventurous, loves cuddles, taking things out of boxes and putting them back in again, reading stories, being tickled, she can say a few words, wave, clap, do the In the Night Garden dance, here’s her comforter, and if all else fails, just make Iggle Piggle sing and you’re golden.

How can I possibly distill everything I’ve learned about you in the last 11 months onto a sheet of notepaper?

It doesn’t feel like it’s time, but maybe it is. Every day you’re becoming more independent. It’s incredible to watch your single-minded slog as you turn commando shuffling into proper crawling, into standing up – no falling down – then standing up again, and oh god, she’s trying to bloody walk. And she’s down again. But not for long.

Soon you will be running, not crawling up the hall after your big brother, giggling together, a crew of two, a sight which fills my heart to the brim and then gives it a little stab as well. For the more you grow, the less I am needed.

But for now, you crawl back and climb up into my arms for a hug, which I savour.

Forgive me if I seem clingy, I promise it’s just a phase.