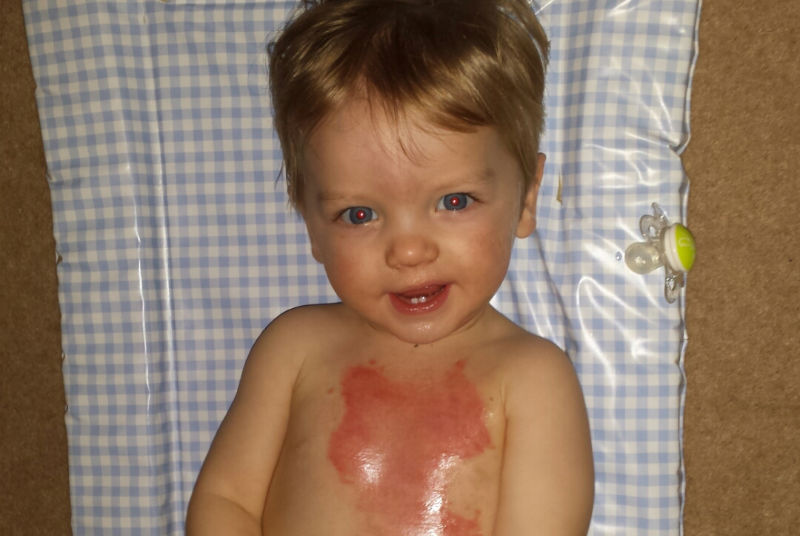 Saturday 6 December 2014 was the worst day of my life. It was a normal Saturday and I was at home with Samuel, then aged two and a half and Jack, who was very nearly 1 year old, while Daddy was at work.

Samuel was a bit tired so I took him up to his room for his nap, and then returned downstairs to have some play time with Jack, while cooking lunch. I put the rice on the stove, made a cup of tea and then sat on the dining room floor with Jack, playing with a ball.

He screamed, I screamed. Then I panicked. All logic left my brain. I stripped his clothes off, then I remember thinking I should run it under cold water, but then I worried that I might send his body in to shock if I suddenly doused him in cold water. So I got a cold flannel and laid it on his chest and stomach. He continued to scream through all this. And then his skin started peeling off, which didn’t help me to calm down and work out what to do. I remember thinking I had to take him to hospital.

So I carried Jack upstairs and desperately tried to wake Samuel, who was so tired and didn’t want to be woken up. I screamed at him to please get up as we need to go to hospital as Jack had hurt himself. I also remember thinking they haven’t had lunch, so I will need to pack some.

Then my husband phoned me back and when I told him what happened, he immediately said ‘ring an ambulance’. Of course! Why hadn’t I thought of that? So I did, and they came really quickly and were the most wonderful people. Jack’s whole body was protected by a big Tea Tree wrap and we were taken to the local hospital. By this time, Jack had passed out and was fast asleep on me.

We were kept in our own room as Jack had an open wound and couldn’t risk infection from other patients. I was visited by many people and asked to explain exactly what happened. They asked me whether my tea had milk and sugar in it, and I remember thinking ‘who cares!’ I now know that milk and sugar will affect the temperature of the water, and this helps them to gauge the seriousness of the burn.

We were then referred to East Grinstead hospital, as it has a specialist burns unit. They were amazing. We turned up about 7pm, they gave him a heavy dose of morphine, and once it had taken effect, the wound was cleaned. He screamed, I cried. The doctors reassured me that it was a good thing that he cried as the nerve endings were not damaged. He was then bandaged from his neck to his waist and he fell asleep.

Unfortunately he got a temperature so we had to stay overnight, but we were sent home the next day with instructions to keep him dosed up on the pain medication. The next week was awful. He couldn’t sleep through the pain, he didn’t want to play, or leave my side. And every time I looked at him, I broke down in tears with guilt. This continued for the next month, to the extent that my husband and close family were worried about me, and considered sending me to a counsellor.

Two weeks after the ‘accident’ the doctors were able to remove his bandages, and although I should have been relieved, part of me was scared that at least when the bandages were on, his wound was protected. Now it was open and I felt like I couldn’t touch him, for fear of hurting him. Amazingly, all we had to do was apply a mixture of olive and lavender oil to his chest and stomach 2-3 times a day.

Sadly, this wasn’t the end of it. The doctors think that his body then went into shock. He stopped eating, had conjunctivitis and oral thrush. We got him antibiotics which made him throw up, so we got him different antibiotics and they made him have diarrhoea. Finally, as we started 2015, he seemed to be perking up. And within 6 months, there was no trace of any scar.

I realise that we were very lucky. And I have now become super-careful when it comes to cups of tea. I also went on a paediatric first aid course, so that I will feel more confident if anything like this should happen again.

At the time, everyone reassured me that ‘accidents happen’ and I remember thinking ‘no, I did this to my son, I caused him this pain’.

Now, I do understand that accidents to happen, but I am sharing my story in the hope that next time you put your cup of tea down, somewhere you think is out of reach, remember Jack, and put it a bit higher, or a bit further back from the edge of the counter.

For advice on preventing scalds and burns click here

For advice on dealing with scalds and burns click here

I am a 37 year old, married, mum of Samuel (4) and Jack (nearly 3). I work part time as a Contracts Manager, and have recently qualified as a childminder so I can spend more time with my children, while they are still young and want to hang out with me.