Confession: I’m Addicted to Photos of the Royal Babies 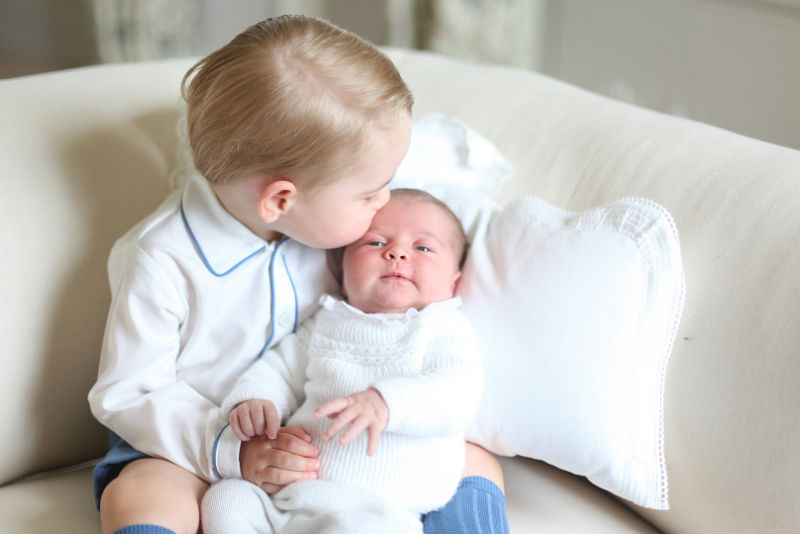 I couldn’t care less about celebrities, I am even immune to the sleazy charms of the “sidebar of shame” and I’m not a forelock-tugging devotee of the Royal family. So I’m slightly ashamed to admit that I cannot resist looking at photos – lots of photos – of Prince George and Princess Charlotte.

Actually, if I’m honest, it’s worse than just looking – that suggests a casual glance – I devour news of them like I’m secretly scoffing Oreos in the cupboard so the kids can’t see; I fawn over their pudgy little faces and their weird 1950s clothes. And as I peruse the little details of their day and their outfits and peer at the close-up of Princess Charlotte’s grazed knee I come to my senses and ask myself ‘what the hell are you doing, reading this crap? Kid grazes knee – since when was that news?’ But do you know how I feel? Utterly delighted, because let’s face it, they’re bloody adorable.

I don’t seek out news of the Royal bairns and my interest doesn’t extend to any of the Queen’s other great grand-children (soz baby Tindall) but should a copy of a Royal-loving newspaper happen to cross my desk or the latest photos of them flash up on a news site while I am at work, I am sucked into the minutiae of two very small people’s travel plans, wardrobes, and facial expressions.

It all started when Prince George was born, a few months after my own son’s birth “They’ll be in the same year at Eton” I joked – “Ha ha ha ha” whilst mentally planning how to get my own son into aforementioned posh people’s school. The answer: a scholarship. But two years later, they only went and had a girl as well. Same as me! What are the chances? Our lives have so many parallels. Must find out which school princesses go to…

I like to imagine that their lives are pretty much carbon copies of ours; George rugby-tackling Charlotte to the ground shouting ‘bundle!’, Charlotte ripping chunks of George’s hair out and giving him a bite on the arm, Kate separates them, then gets back to flipping the fish fingers under the grill. Charlotte colouring her entire head in purple felt-tip, while Kate has a few minutes to herself checking out Facebook. George reading stories, doing the Cha-Cha Slide on repeat and having tantrums over lost acorns in the park.

But why the heck am I so fascinated with the micro-Royal Highnesses? Is it just a mother’s natural curiosity to compare her children with others the same age? Or is it downright weird to be so interested in the lives of two toddlers who I don’t know from Adam? Are there really any parallels at all between the lives of my children, and these two cherubic infants in their golden bubble other than the fact that they happened to be born in the same year, and the same gender?

I suspect that’s where the similarities end, but I hope not. Because the beautiful children with the side partings and the weird (and really expensive) 1950s clothes are surely a public image and maybe behind the scenes, protected from the public gaze (okay, my gaze) George and Charlotte are real, three-dimensional, flawed, wonderful, hideous, enthralling, chatty, adventurous, rambunctious kids who get grazed knees, throw wobblies, who tear shreds off each other one minute and give each other the best ever bear hugs the next. Just like any other kids.

Image credit: The Duchess of Cambridge