“Does the ‘Cry it Out’ Method Work on a Clingy Husband?” 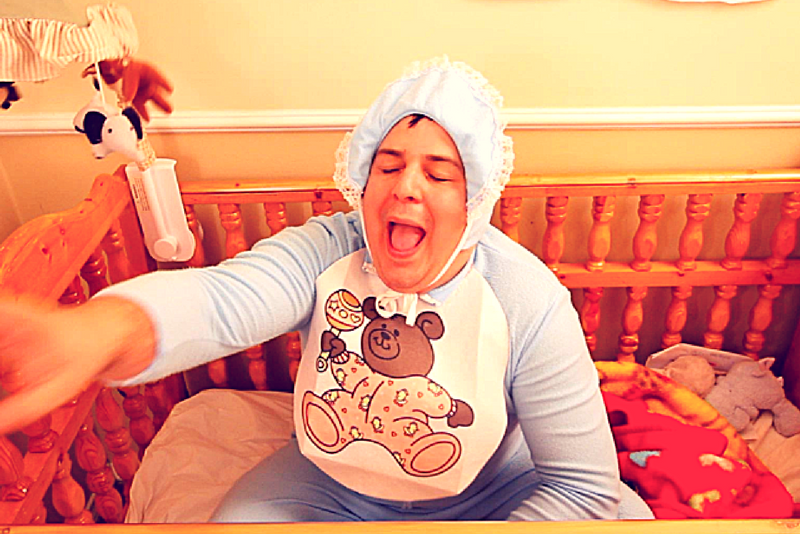 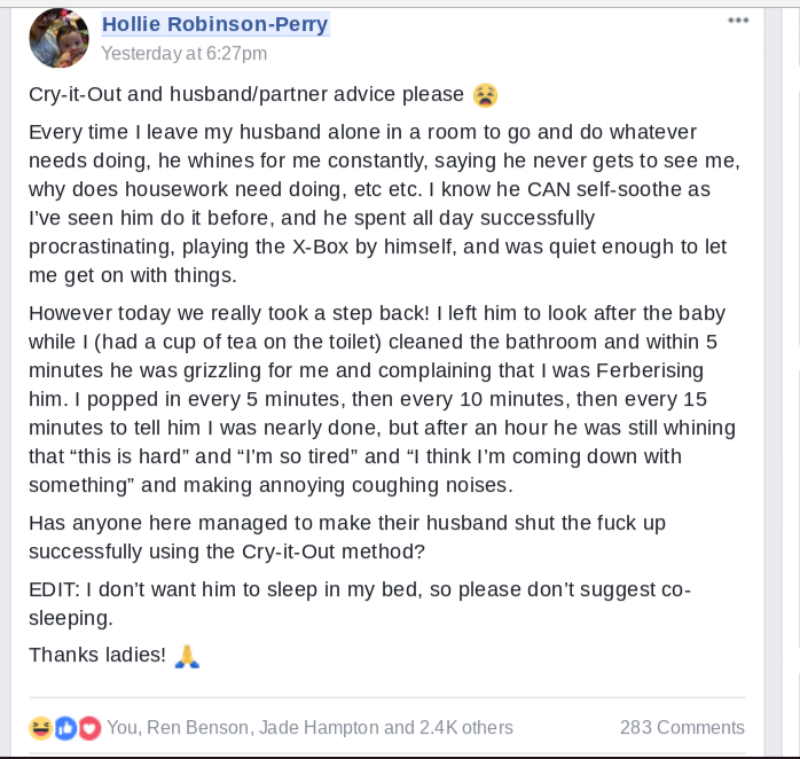 And the comments which followed were hilarious too:

Kate Dyson: I’m not usually pro-CIO, but in this instance, I think you really have no choice. Black out blind, closed door, the works – he needs to learn to self settle. But I’m afraid it may take a while to train, so be in for the long haul and ensure you maintain consistency. Be STRONG! Don’t give into the grizzling, it’s just manipulative behaviour. He is just trying to break you so STAND FIRM and resist all urges to go in and check him. In milder cases the’shush and pat’ technique may work but you’ve probably made a rod for your own back (no judgement hun) so will have to pull out the big guns. He needs to learn who’s BOSS. Honestly, babies and puppies are WAY easier. Get one of those next time.

Caroline: Okay so there’s something similar to the perfect prep machine I believe they call it Tassimo or something, so he can easily get drinks. It’s worth investing in the adult versions of CBeebies – I believe it’s called Sky Sports. If that doesn’t work maybe try a bottle instead of a boob they come in boxes of 6 I’ve found the San Miguel ones worked best for us.

Sarah: I don’t have any advice to give but wanted to let you know that you are not alone. I think it’s pretty normal behaviour unfortunately and you have to just ride it out. I hope you find a big enough bottle of wine to help you through this phase

Eve: Check the Wonder Weeks. Week 98766767779 is the real killer. This is when they regress and can’t boil the kettle without wailing and then calling for their mummy.

Elanor: I would definitely suggest the ‘time out’ method. If you are unaware on how this works, you take yourself out to the spa or the pub for some time out. If he is a slow learner and still cries, take a longer time out next time. I suggest a weekend away with the girls. Hope this helps.

Claire: I’ve think crying it out just makes them cry more/longer/louder. Try feeding him til he’s calm and sit him on a chair quiet but awake, see if he can settle himself.  If not, I recommend carrying a white noise machine with you at all times to drown out the cries.

Jenny: Have you tried to fit a snack into your routine? I’ve found it keeps them quiet for a bit longer, even better if you can find them something to look at on YouTube while they eat it.

The post got a MASSIVE response, with thousands of reactions and loads of MOLOs claiming it was the best ever. Hollie was very happy to share her comedy brilliance with us but has asked us to point out that her husband may be high-maintenance but is actually rather wonderful. Ahhhh.

For more brilliant stories from The Motherload® Facebook group click here. And for the latest, head to our homepage.

Alison is the Editor of The Motherload®, and is also a radio producer and broadcast journalist, a mum of two and a wife of one. Since becoming a mother she has (mostly) gladly swapped a busy social life of gigs, pubs, art galleries and museums for dancing in the kitchen, drinking on the sofa, finger painting and hanging out at the park. She talks incessantly about not having slept for five years.