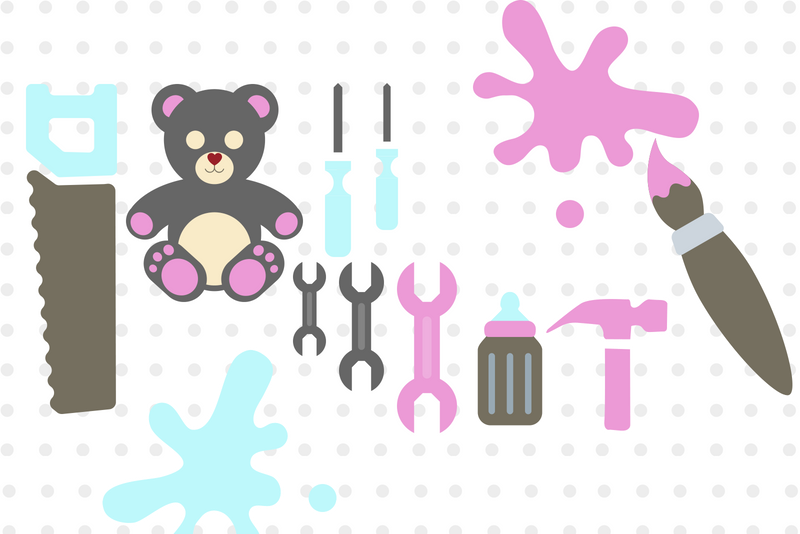 When you have kids, you generally have to do stuff to your house – make more space, decorate walls your little angels have scribbled on, find somewhere for a gazillion toys to live, flat-pack. Oh god, the flat-pack…

But doing DIY when you have kids is like doing the Krypton Factor in the dark while someone is constantly shouting ‘mummy’ at you from two feet away. Fact.

There are many other ironies about parenting and even pregnancy. Needing food to grow a human, but your body constantly wanting to throw up? Human design flaw.

Then there’s the ‘nesting instinct’ to clean every inch of your floor despite being unable to reach past your knees? Ridiculous.

And it was exactly this situation I found myself in, in March 2014. Heavily pregnant with my second child and sitting on the toilet in my bathroom, I looked around at grotty lino, artex ceiling, peeling wallpaper and tiles I hated and I did something I shouldn’t have. I started peeling the wallpaper off. It wasn’t difficult – years of steam from the bath and shower had basically done most of the hard work for me. Within a couple of days and minimal effort by my crazed hormonal self, all the paper was removed. Underneath lay crumbling walls that needed re-plastering.

I don’t remember being concerned about this, just thinking we’d just get it all done. My husband was not impressed. Mainly because he saw loads of walls that he was going to have to re-plaster.

My blissful ignorance continued, but my enthusiasm did not. As the second baby arrived, so did the tiredness. Until 6 months later when the baby was having a particularly long nap and I discovered the artex on the ceiling was actually very easy to chip off. A few days later I’d removed it all. Again, my husband was not impressed as we discovered that he was going to have to re-plaster the ceiling too.

More months passed and my maternity leave ended. Back at work and we were seriously deprived of two things – time and money. Two children in nursery meant our childcare bill was more than our mortgage and the realisation that tradespeople were both expensive and disruptive dawned. This is where any hope of having a finished bathroom started to fade away.

A rare free weekend a year after the fateful day when I started peeling off wallpaper, and my husband plastered the walls and ceilings. I’m fairly sure I spent the entire time removing the 3 year old from the bathroom where he wanted to ‘watch’.

As an aside, when people post pictures on facebook of their toddlers ‘helping’ with DIY, with toy hammers and plastic yellow hard hats on, I can only assume that either a)they are clinically insane or b)they have set up this photo very carefully then IMMEDIATELY taken their child to grandma’s for the weekend to avoid a near-death experience with an angle grinder.

So the plastering solved one problem, but instantly created another. We had now exhausted everything we could do ourselves and had to do some saving up.

I should explain that once we were young. And stupid. We bought a ‘project’ house – a stone country cottage in need of work and with loads of ‘potential’. Potential to be a right pain in the arse. And since we have been blessed with our children, there have been days when I would give my right arm for a gas fire instead of an open fire, an effective damp proof course and a downstairs loo.

This being our only bathroom and toilet, we soon found that all four of us were using it as the ‘baby’ became a fully potty-trained child. There was only one solution to how we could get a new floor put in and vast amounts of carpentry done without weeing or pooing for two days. We went on holiday instead.

New floor down and wood installed, there was just the small job of painting everything in sight. Which is exactly what my children would have done if they were anywhere near the bathroom, a tin of Laura Ashley’s finest and a paintbrush. So we painted in the evenings. Many evenings in fact, until it was done. Then there was the flat pack. Oh god, the flat pack.

When I started removing that wallpaper I had one child who was two. I was 30. I very soon turn 35 and have a six year old and a four year old. There are still days I would kill for a gas fire, a damp proof course and a downstairs loo, but four years later, at least I now have a finished bathroom.