Dolly and Danny go to the Duck Pond 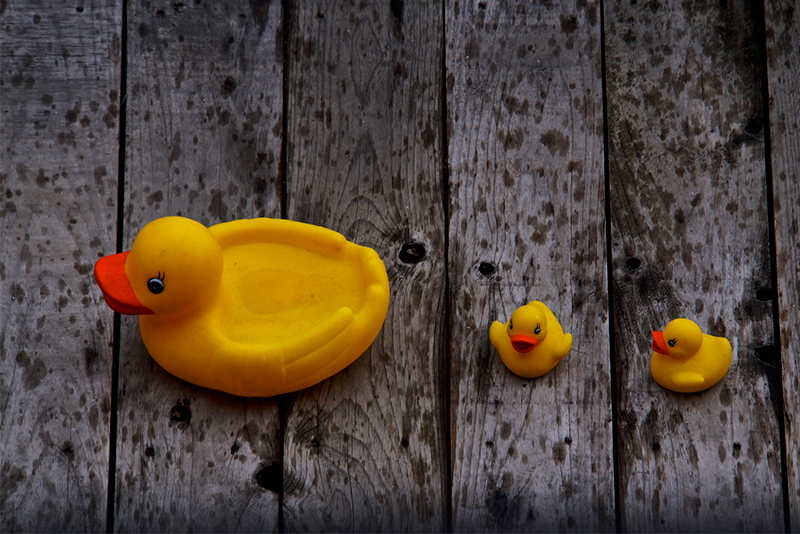 In this story, Dolly and Danny take a trip to the duck pond (that ended in tears like nearly every other pissing time they leave the house)…

It was a warm and sunny day in Topton, where Dolly and Danny lived.

Today was particularly exciting in Dolly and Danny’s house because Mummy was taking them to the park. There had been a story in the village newsletter about some ducklings hatching in the pond and the children had talked of nothing else since they saw it.

Of course, every trip outside starts with an exciting game called ‘Who Can Stay Out Of Their Coat The Longest?’. This day’s game was tense and invigorating because they were already running “really fudging late” according to Mummy. Dolly and Danny were both taking part with huge enthusiasm, and Mummy felt like she was once again fighting a battle she didn’t really care about and was only bothering with because of The Judgement From Others that occurred when your child went out without a coat.

In the end, everybody was declared a winner because Mummy bribed them with chocolate before she lost her tiny mind and they were all out of the house just two hours after they planned to be. Result.

The park wasn’t far from Dolly and Danny’s house, and the relaxing stroll took them past a field in which two delightful ponies lived. The horses trotted over to say hello to the children and this prompted Dolly to remember that she was desperate to have a horse and why couldn’t she have a horse and could you die of disappointment? Because if she didn’t get a horse soon she was definitely going to die of disappointment and then Mummy would be sorry.

Danny gave his sister a dead leg. Mummy turned a blind eye to this.

When they arrived at the park, they headed straight for the pond to see the ducklings. But……disaster! The ducklings weren’t there! A sign said they’d been taken into shelter at the vets due to the recent inclement weather.

Mummy felt light-headed and as if she was tumbling down a vortex of fear where the walls were lined with yellow feathers and quiet ‘quacking’ noises built to a huge din, threatening to sever the last thread that hung delicately between Mummy and sanity. But then she composed herself and quickly came up with a plan to buy herself more time, just as she was trained to do at Mummy School. Telling the children that the sign says the ducklings were on the other side of the pond, she said that they must walk over there as slowly and as quietly as they POSSIBLY could, so as not to scare the ducklings away.

But oh dear! Dolly and Danny didn’t seem to want to play the Walking Slowly And Quietly game and galloped off to the other side of the pond shouting ‘COME HERE DUCKIES, WE WANT CUDDLES’.

Three minutes later, and Dolly and Danny were in possession of all the facts: there were no baby ducklings in the vicinity.

Dolly took this news rather well, using just the one fist to hit Mummy in the groin, but Danny didn’t have quite the same restraint. He hurled himself to the ground with such force, it was as if he had been thrown by an explosion. He then started to express his disappointment at this atrocious day by beginning an assault on the nearby daffodils.

Mummy considered walking away quietly and just keeping watch from a distance but she knew she couldn’t. Because there were Other Mothers around and they would Judge Her. So she began to chuckle with delight at her son’s passionate nature and roll her eyes in solidarity with the surrounding mothers (who didn’t return the sentiment), while coaxing the little darling to his feet using her special ‘Very-Audible-Encouragement-With-Very-Quiet-Threats-Whispered-In-Ear’ method.

Mummy dragged Danny back across the park to the exit and Dolly skipped excitedly beside them, very pleased that she wasn’t the naughty one this time.

As they passed back by the pond, Dolly pointed to the tramp on a nearby bench, sitting in his stale clothes and swigging from a bottle. ‘Oh look Mummy! That poor man without a home to go to’.

Mummy glanced over at the man on the bench with his legitimate excuse not to brush his hair, his lovely view of the pond and his nearly full bottle of vodka – all alone with no responsibilities, no demands, no brat kicking his shins and no worries about counting fucking Propoints and sighed in agreement, ‘Yes Dolly. Poor tramp’.

Hello! I’m Hannah, I’m 25 and I’m as happy relaxing on the sofa with a movie and a good glass of red as I am catching a new band in a cool venue. Oh, wait, no sorry, that’s for Tinder. What’s this? Motherload profile, oh yes, here it is:

Hello! I’m Hannah, I’m 35 and I live on the sofa with red wine. I work in advertising. I like to write, draw, print, take photos, finesse my impression of Ringo Starr and polish my 1987 Blue Peter badge. What did I get it for? Oh thanks for asking, I designed a dress for the lovely Caron Keating.

Hello! I’m Hannah, I’m 25 and I’m as happy relaxing on the sofa with a movie and a good glass of red as I am catching a new band in a cool venue. Oh, wait, no sorry, that’s for Tinder. What’s this? Motherload profile, oh yes, here it is: Hello! I’m Hannah, I’m 35 and I live on the sofa with red wine. I work in advertising. I like to write, draw, print, take photos, finesse my impression of Ringo Starr and polish my 1987 Blue Peter badge. What did I get it for? Oh thanks for asking, I designed a dress for the lovely Caron Keating. Oh, yes, nearly forgot, I’m also a mother.