#DryMOLO: A New Horizon for The Motherload 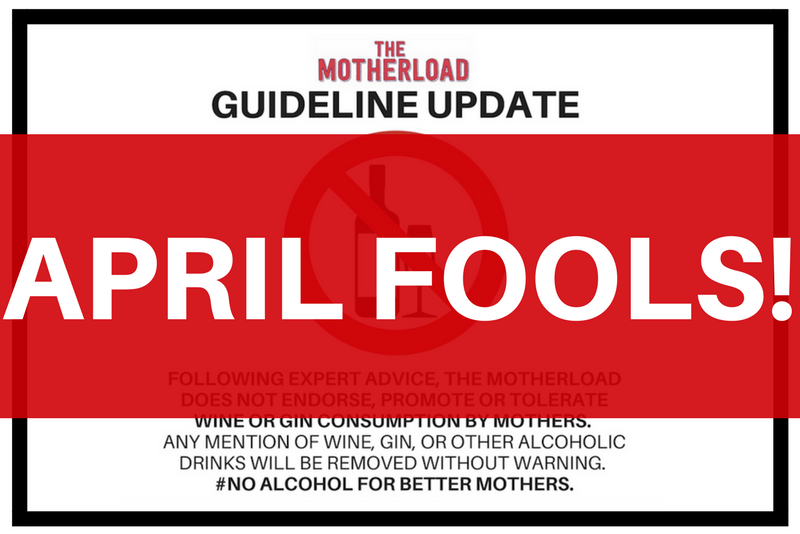 WHOOPS MOLOS! Did we trick you? Yes, this was our April Fool’s prank – don’t fear, The Motherload®’s policy of maternal alcohol consumption is going NOWHERE – now, where did I put that wine?  Apologies for the minor heart attack we may have induced.

Here on The Motherload®, we take parenting seriously. We know that it is hard, and we know that often, mothers are pushed to their limits on a daily basis and so up until this moment, we have supported our members having the odd tipple in order to alleviate the daily grind of dealing with poonamis and tantrums.

Unfortunately, we can no longer do that.

We were recently contacted by Dr Prila Loof, from the Institute of Parenting and Childhood, who warned us of the dangers of ‘Mummy Juice’. She was enormously concerned that there is a rising trend in parents resorting to wine, or gin specifically, to anaesthetise the day away and help mothers cope.

“We are concerned to see a rise in maternal drinking following a normal day of parenting”, Dr Loof stated. “There appears to be a developing behaviour in mothers of children under 16 who, in varying degrees, reach for the bottle as soon as their child’s head hits the pillow. In some cases, we have learnt of mothers swigging from the opened Chablis as they clear away the lunch things; this is especially prevalent in cases where baby-led weaning is being implemented. If a child exhibits tantrum behaviour, we see from our studies that there is a 1000% rise in drinking by mothers by 6pm.”

She went on to advise that mothers find an alternative way to de-stress from a day at the coalface of parenting. “We recommend a daily routine of pilates, kale smoothies and orgasmic meditation” She stated.  “This will help to ease the stress of motherhood on the body, fulfilling the mind, and enabling bowel movements to become more regular thus enabling the rhythm of the day better.” Wise words.

Following Dr Loof’s advice, The Motherload® HQ felt, that on balance, we should probably clean up our act and so we have introduced #DryMOLO. The Motherload® is, from 1 April 2017, a dry site and will no longer tolerate reference to alcohol in any form.  We will seek to expel members who do not abide by this guideline; and will only approve posts that directly refer to the new #DryMOLO approach of pilates, smoothies and OM.