Ectopic Pregnancy: A Near Death Experience 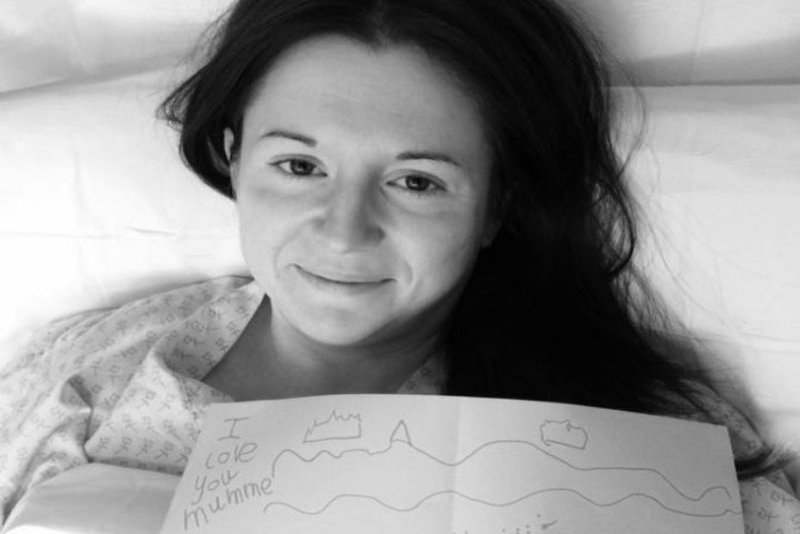 The initial feeling of seeing those two lines on a pregnancy test, is a feeling like no other. The excitement, the worry, the longing or the shock. Personally, I felt all of those.

My husband and I already have a beautiful five-year-old boy, who as a baby was difficult to the say the least. Sadly, he suffered with lactose intolerance and probably didn’t sleep through the night until at least 18 months. We were and still are so consumed with this little human we never felt the time was right to introduce another baby and risk never having sleep again. Until two months ago, when we found out we were pregnant again.

I always felt that I wanted another baby, but due to a high risk pregnancy before, traumatic labour and birth, and a baby that never seemed to sleep, could I really go through all of this again? But I was, and even with all this in the back of my mind I was bursting with happiness and excitement. Dealing with morning sickness and the secrecy surrounding this early pregnancy was tough especially amongst friends and family, but this didn’t last for long. A few days after my positive pregnancy test I started to bleed lightly and went to my Early Pregnancy Unit. The lady who heads up my local unit is coincidentally my neighbour, and really took me through the process of what was going on. An internal ultrasound was performed and a hospital urine test which both came back negative. They suggested I may be too early to be scanned and I should repeat the scan in a few days, followed by a blood test to monitor my hCG levels. In the meantime, I should go home and report if any more bleeding occurred.

The wait for me was agonising, was I miscarrying? Had I already? Was I even pregnant in the first place? I then did another pregnancy test (digital this time) and sure enough it said 2-3 weeks pregnant. My hCG levels were doubling as in a developing pregnancy but there was one thing that was troubling, no sac, no baby on any ultrasounds. The doctor decided to wait another week and scan me again, sadly I never made it back to that scan. The night before I felt like I had a mild tummy ache, no shoulder pain as the hospital booklet said if I was suffering an ectopic pregnancy. I went to bed with a hot water bottle and thought nothing of it.

On Thursday 29th June the morning of the scan, my husband took the day off work to take our little boy to school, whilst my mum joined me at the scan. I remember being upstairs in my favourite Matalan nightie planning on getting ready like any other day. However, suddenly I felt the most horrific pain in my stomach and called out to my husband to call my neighbour for help. If anyone knew what was wrong it would have been her, she knew my medical history and came rushing over. I decided to lay in bed and then passed out. I came around every few minutes, before passing out again. I could hear the noise of sirens, more people gathering round my bed. The images of men in red seemed to stick in my mind, (I know now these were men from the air ambulance and fire brigade) I still remember the pain was so consuming, and there was nothing I could do to ease it. I was losing blood, and my stomach was tight. I have vague flash backs from that day, but the look on my Mum’s face when she saw me was of pure terror and fear. At that point, with machines hooked up to me and the number of people surrounding my bed at home. I knew I was fucked…

I now know that due to the amount of blood I lost, the paramedics felt I should be kept flat, as every time I was raised I would pass out again. The air ambulance decided to get me out as soon as possible as my blood pressure was so low, and blood loss so high, so they put me in a chair and lowered me down the stairs to the ambulance. I remember the light hitting my face, and at that point I felt that I may never be at home again. I may never feel the sun touch my face ever again. Will I ever see my husband, my little boy again? As I heard the ambulance door shut, I felt a rush of panic. The sirens came on and the ambulance man muttered something about CPR. Could this all be down to a pregnancy going wrong, all this pain and panic. It certainly was…

I arrived at pre-surgery and I remember my husband coming in, and the surgeon giving me a consent form. A form to say I would allow them to perform an operation to locate the rupture and possibly have my tubes removed. At this particular moment, I would have done anything for the pain to stop and the next few minutes were honestly the worst in my life. The pain was so intense and they couldn’t put me to sleep due to not finding any veins, as all my remaining blood was being sent to the heart to keep it pumping. One woman was jabbing needles in my feet, my neck whilst another cut through my nightie.

I was in surgery for around four hours, having performed surgery to remove one fallopian tube, one ovary and my baby. I then had three litres of blood transfused and was left with one hefty scar from the top of my belly button down past my c section scar. I was told by the surgeons, I had survived and I was lucky to be alive. But my feeling wasn’t of relief, it was of pure loss and sadness.

I recovered on the ward and was given a consent form, to “dispose of the human remains”. I initially didn’t give it much thought and signed away, but I find myself thinking about this quite a lot. The surgeon said the baby was tiny, but still enough for it to rupture and lead to what had happened. Today, I would have been roughly 12 weeks pregnant. I think about that tiny baby and think how much he or she would have grown. I would be having my scan, sharing my news with my family. However sadly I’m not, and it can sometimes be hard to take.

Returning home, being housebound and not being able to drive is obviously frustrating and having my son home for the school holidays is heart-breaking. Heart-breaking as I can’t do all the fun things we would have normally done or visit our usual crabbing spot on the beach. Some friends have been my saviour, taking my little boy out, bringing food and just coming in for a chat. Some friends haven’t even been in contact at all since it happened. I would like to think that they just don’t know what to say to me or how to act, which does hurt me. Most friends and family have been truly amazing but no one more than my husband. Although he won’t have known some of these thoughts of mine, as I couldn’t bear to overwhelm him, he has cared, helped and done everything he can for me over the last month, and without him being home that day I’m positive it would have been a very different outcome.

It’s going to be a long road to full recovery, emotionally and physically but I’m hoping over time things will get better. I want to make women aware of the dangers of ectopic pregnancy and how listening to your body is so important.

If you have a friend or relative who has either lost a baby or may be in poor health, please open up to them in any way you can. Just giving them a quick visit, dropping round some food or a gift really can brighten up their day. I know it may feel very awkward or you may not know what to say, but actions do really speak louder than words. Give them a hug, and just show them that your there for them.

I’ve just finished four rounds of antibiotics following an infection and can finally drink, so in true MOLO style I’ll be raising a glass tonight for all you lovely ladies who have supported me and continue to do so! You’re all amazing..

If you would like to know more about ectopic pregnancy symptoms or advice the Ectopic Pregnancy Trust is full of invaluable information.

I’m Rachel Dampier, Wife, Mother and Wedding florist (due for early retirement). 2017 has been filled with ups, and quite a few downs. I’m looking forward to the next year off work, and to be able to live life to the full. I have recently suffered a life-threatening Ectopic pregnancy, and now wish to spend the next few years fulfilling my new (quite shit in places) reformed bucket list.