How I Managed To Breastfeed Twins 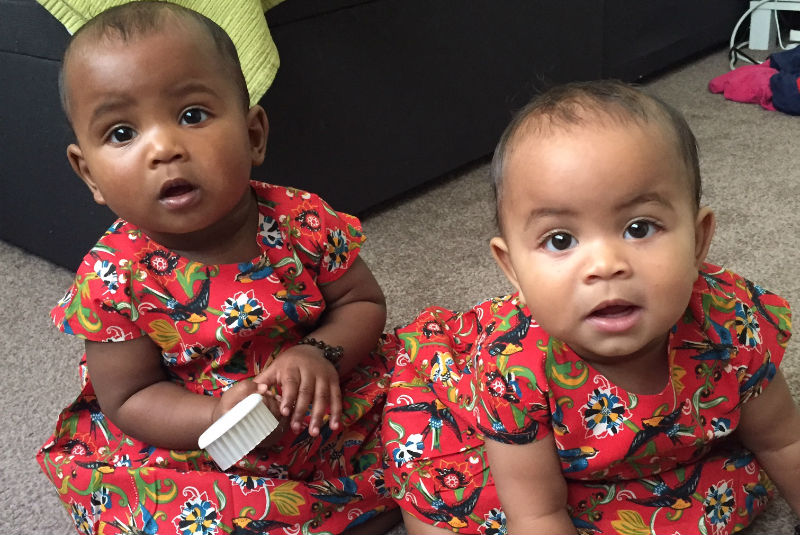 I like to say that our twins are ‘self-inflicted’ as they were conceived by Frozen Embryo Transfer from an IVF cycle five years previously from which we conceived our first born daughter who I breastfed until she was 1 and a half years.  The twins are now 11 months old and breastfeeding for us is pretty much second nature, however we have come a long way since November 2015.
The Twins aka the M&M’s were born via elected c-section, the experience was as pleasant as it could be. The theatre team were fantastic, we made conversation and engaged in humour during the procedure. I have to make light of most situations so I asked for a tummy tuck when they stitched me back up, but unfortunately this didn’t come as an added extra. They were born weighing 5lb 2oz and 6lb 6oz at 35 weeks.
So how do you breastfeed twins? My first memory of feeding them was whilst waiting to go back up to the ward, them both laying on my bare chest and Twin 2 latching on by herself. This was amazing as I didn’t get this skin to skin contact for a few hours with my first born. Once on the ward the breastfeeding support was great with one nurse in particular being an absolute legend. I honestly cannot rate her enough, many years experience and very encouraging.  She was literally hands on (with my permission) showing me how to get a good latch and the positioning of babies mouth. 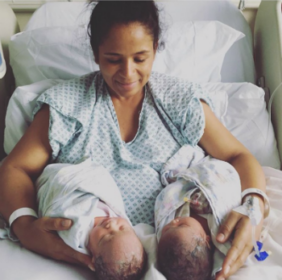 After a few hours on the ward Twin 2 had to go down to special care as her blood sugars were low. Whilst there she was tube feed a mix of formula and expressed breastmilk. It’s all such a blur but I think she was there for around four days. I was left with Twin 1 who took just a few days or so to become established. After my first experience of cracked, sore nipples, Lanisoh was used religiously from the onset. I began to feed Twin 1 on one breast and express the other breast at the same time for it to go to twin 2 or to be used as top ups (if they didn’t latch for long enough hospital staff would cup feed top ups.)
When Twin 2 came back up onto the ward with us, with support, I tried to get her latched on but after being the first to latch at the start, now sadly she wasn’t having any of it. I refused to give in and kept offering the breast but to no avail, so the nurses would cup-feed her due to me wanting to get her established on the breast; they said cup feeding is best as not to cause nipple confusion.
Due to my limited mobility following the c-section, their dad and the rest of the family actually saw more of Twin 2 in those first few days than me and I felt guilty, like I had abandoned her. Then in the dead of the night as they both lay in the hospital fishbowl crib beside my bed, I had a lightbulb moment. I thought about Twin 2 being all alone and missing out on all the cuddles and closeness Twin 1 had had whist she was away. So that night I took her and slept with her on my chest, I made up for all the hugs and kisses she missed out on. The following morning, I kid you not, when we tried she latched on and had her first proper feed. It wasn’t plain sailing from there as she had her ups and downs to the point of her almost having to have a tube again for feeding but we managed to get back on track without this.
So still in hospital, but now needing no support from the nurse to feed them both together.  I got it into my head that they should be fed together mainly due to them needing to feed every four hours and on demand if required. No one suggested anything different. So me the twins and my breastfriend feeding pillow would go through the ritual of getting set up, (no time to think about splitting into two from the c-section), I was up, in and out and back in that hospital bed every flipping four hours. Then comes light-bulb moment number two after a good week of this crazy ritual! I don’t actually have to feed them at the same time. OMG was this a god send, although it felt like I was breastfeeding most of the day and night, it worked for us in those early days, and it’s not like I had anywhere to go after all!
In order to leave the hospital both babies had to make their weight gain and be fully established. The initial mental and physical battle, on limited sleep, feeding two babies every four hours took close to two weeks hard slog. I am a stubborn old bag and I was determined to achieve this, if only for a month. On the 11th day, we were discharged.
Once we were home, it all felt a lot more relaxed, no more filling in feeding times and durations for the hospital staff to monitor, just me and the babies feeding on demand. I challenged myself to feed them for a month and then on getting to a month I’d push for another month. By the time we reached three months it was plain sailing.  We didn’t leave the house in those three months unless it was just after a feed and I knew we could be back before they were ready again. The majority of the time they managed to not be hungry at the same time so we got one-on-one feeding time, however there were times when there’s no pacifying one whilst the other feeds.
When they were tiny the double rugby hold was our preferred position for tandem feeding but now it’s them both laying in the same direction or now that they are mobile, pretty much however they decide to dine from the milk bar. That’s essentially what I have become and there are fleeting moments where I wish I would have combination fed or at least introduced a bottle in the early days as I have been tied to these suckers for 11 whole months. Will they take milk, be it breast or formula from a bottle or beaker? NO! They said “Sorry mum you’re on lock-down until we decide you can have your boobies back!” I’m secretly hoping this will be around the one year mark.

I’m 39 and a long-time wishing mum of 3 girls. I’ve been Deputy Manager of a Children’s Home for 12 years  and am currently on maternity leave. I always try to have a positive outlook on life. My favourite quote of all time is “believe to see”.