How One Family Cut Back On Plastic 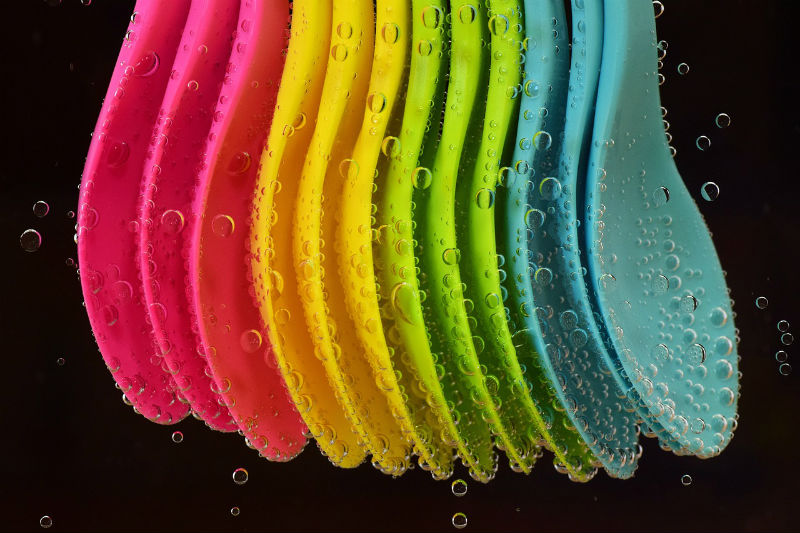 Ever since Blue Planet highlighted the problem of plastic pollution in our oceans last year it’s been very much on the public conscience that we as a society have a major issue with plastic. According to UN figures, if current levels of pollution continue, by 2050 there will be more plastic in the seas than fish. Horrifying thought.

But take a look at your weekly shop and it’s easy to see the extent of the problem. Our healthy supermarket shops turn us into magpies for plastic: the thin stuff that bags up carrots, the thicker stuff for potatoes, the hard trays for fruit. We might think we’re saving our waistlines in our own lifetime, but at what cost to the world our children will grow up in? After all 86% of collected plastic is not recycled, and according to those UN figures between 8 and 12 tonnes of that waste plastic then ends up in our oceans each year.

The most ridiculous thing about a lot of the plastic we pick up is that as soon as you get home, we unpack everything from its plastic container and that waste plastic goes straight in the bin.

I grew up in a house where there wasn’t much money, but there was always a commitment to recycling, and it’s an ethos I’ve carried with me. And it’s with that positive, frugal outlook that we as a family of 3 (nearly 4!) have gone on a mission to cut back our plastic expenditure…often saving ourselves some pennies in the process.

1. Glass Jars Rather Than Squeezy Bottles

I’ve always been a bit suspicious of anything in a squeezy bottle; mayo, tomato ketchup, Marmite… they always seem like a watered down version of the real thing. And it turns out I was right to be suspicious as despite the lower transport costs of plastic (less heavy than glass), on the whole these are gram for gram more expensive! (and harbour bacteria in their lids – yuck!) Also you totally don’t get the joy of scraping out the very last bit of the jar – so satisfying!

Supermarkets seem desperate for us to buy our fruit and veg in plastic packaging. However, if you’re anything like my family, you won’t always make it through a full bag of carrots before they go soft and bendy. So despite the reported 50% mark-up on loose fruit and veg, you might end up saving yourself money by buying 2 loose carrots for that hidden vegetable bolognaise, rather than a whole bag.

3. Frozen Rather Than Fresh

Sometimes plastic is unavoidable, and it’s important to pick your battles. An example would be frozen vs. fresh. Think of how many meals you can get out of a bag of frozen sweetcorn or spinach compared to the one-meal serving you get out the fresh versions. It’s got to be 10-1 surely? And there’s no evidence that they are less good for you. So stock up the freezer and save yourself the panic of “what veg are we going to have with tea?”

4. Buy In Bulk Where You Can

I’m not talking about heading out to the cash and carry; but I am talking about buying a bigger bottle of softener, or a big tub of yogurt rather than the smaller sizes and then decant into a cute little glass jar or ramekin when you need it.

We’re used to buying certain products in cardboard – like breakfast cereal – but it’s increasingly possible to get things like pasta, rice, and washing powder in cardboard too. And paper products like cardboard are the most widely recycled group of packaging waste in the UK, so it’s worth shopping around as often the cardboard-boxed products are actually cheaper too!

6. Washing Powder Rather Than Tabs

This was a bit of a revelation to me. Cheaper than liquid or gels (which always come in plastic packaging), and without the plastic coating of liquitabs, powder is surely the dark horse of the cleaning aisle. It’s better for your machine (nothing to clog up the pipes) and does exactly the same job, but with environmental bells on. Love the stuff!

7. Cloth Nappies (for at least some of the time)

Apparently in the UK about 8 million disposable nappies are thrown away each day, most of which end up in landfill where they’ll take hundreds of years to degrade. So for this reason, most councils in the UK will have some sort of scheme to get you to at least try cloth – normally equating to £100 worth of free nappies. Actually 100% FREE! Even if you only use one a handful of times and then re-sell it (there’s a massive resale market for cloth) then that’s a handful of nappies you’ve saved from landfill. Oh and they come in gorgeous patterns – win win! (If you’re not quite convinced by cloth, this MOLO blog might persuade you!)

8. Flannels Instead of Wipes

Once upon a time, we all used flannels all the time, and then wipes crept in. What’s ridiculous is that for the price of one pack of wipes, you can probably get 10 flannels, which you can wash and use again and again. We have a stash on the changing table with a little tub of water for bums, a stash under the kitchen sink for post meal clean up, and of course a pile in the bathroom for mucky paws and faces. Also I swear they get pooey bums cleaner than a wipe ever would – especially for those weaning poos that just get mushed around by wipes.

Speaking of weaning, I think we can all agree that there is definitely a market for gullible new parents when it comes to baby products that you absolutely must purchase before you realise that you’ve been conned. As a second time mum, I can tell you that no baby has ever turned their nose up at ice-cream off a normal teaspoon rather than a gaudy brightly coloured plastic weaning specific spoon. Save yourself some money and save the environment. Just use the teaspoons that are already in the drawer!

A recent study suggested that 8.5 million single-use plastic straws are thrown away in Britain each year and if the Environment Secretary has anything to do with it, they could soon be a thing of the past. So get ahead of the curve and start saying no to straws if they’re not made of recyclable paper or even better buy a really awesome personalised stainless steel straw that your littlie can proudly show off to their friends.

Again the packed lunch is an area where plastic will creep in. But one sandwich-sized tuppaware would save you from using any clingfilm and would last years.

Another revelation to me. 18 months ago, I bought a wet & dry epilator on the advice of a friend who swore by hers. 18 months later, I haven’t used a razor for…well, 18 months! And my skin is seriously thanking me. Super smooth armpits, very fine regrowth that’s basically invisible on my legs, and all for one slightly longer shower a week – it’s a game-changer! You just need to grit your teeth through the first few weeks and you’ll be a convert – trust me!

13. Get A Menstrual Cup & Invest In Some Cloth Sanitary Pads

I felt a bit weird about using disposable sanitary protection after having my son. It wasn’t necessarily the waste aspect but just the artificialness of it (also I’d had a bad tear and nothing was soft enough!) so I invested in some super-soft cloth pads and they are a game-changer! They tend to have a grey lining so it’s not too grim, they’re super absorbent and you can wash them with everything else. Oh and they come in really pretty patterns. There is an initial outlay but I calculated that they’d paid for themselves after 6 months of use. Bargain! The menstrual cup is another great option but takes some time to master getting it in and out, and you’ll need to find one that fits (advice here).

14. Use Matches Rather Than A Lighter For Those Birthday Candles

Whatever happened to matches?! A great example of design overtaking common sense. Matches work, they’re biodegradable and super cheap. Whilst a lighter will only last you as long as the lighter fluid and then get chucked away, ready to sit in landfill for all those hundreds of years.

So there you go! Hope that’s provided you with some food for thought. We would love to hear your ideas for how your family has cut back on plastic.