I Met My Husband Through Online Dating

Back in the mid-noughties, online dating wasn’t seen as the norm.

In fact, it was pretty much a saddo thing. Cringe factor 10. Whispered behind hands and computer screens. NO ONE admitted to it. If you were asked on a date where you had met each other, you glanced conspiratorially and stumbled over each other to say ‘oh the cinem… bar. BAR! Cla…BALHAM. In Balham!” and then shuffled away giggling and hoping that there wasn’t a neon sign above your head blaring “THEY MET ONLINE! ONLINE I TELL YOU! SADDOS!”

However, back in Stoke-on-Trent in 2007 I was fed up with a capital F of dating. I had been single for three years and had hooked up with blokes in our social circle to no avail, save a bit of distraction here and there. Facebook had recently become THE app du jour,  and with it came an advert for ‘My Single Friend’, a dating website started by Sarah Beeny that promised to be different. FINALLY! No more weird Match requests AND, because it was new, it was bloody cheap – a key ingredient at that point in my life. The key difference was that your mate had to write something nice about you to make you appear normal, so I enlisted my funniest work colleague (because obviously this is the sort of thing you do on an employer’s time, sorry Signal Radio) and got my profile up.

Date one was an utter disaster. Unfortunately it was slim pickings in Stoke-on-Trent, and the guy I met, Rich, literally spent the entire date yapping on about his car and ridiculing me for not being able to drive. At the end of the date, he slammed the keys onto the table and asked if I knew what brand of car he drove. I hadn’t a clue; I’d totally zoned out of his boring chat and he flipping knew it. “I find it an insult that you have no idea; it’s best to say we won’t be seeing each other again, right?”. THANK FUCK FOR THAT.

I swore off online dating.

A year or so later, I moved to London. I lived in Leyton, had no friends in London and it was potentially the most ridiculous thing I’ve ever done. I did have a good job though, and although I made friends through work, dating my workmates wasn’t particularly a good idea. So in a moment of madness, I fired up the My Single Friend and reignited my search for love.

This was years before the swipe-ability of Tinder, and still in a time of messaging each other for a ‘meaningful’ approach before arranging a date. God, it almost feels like pulling the quill out in comparison to online dating these days. I had a few successful dates, but there were many more that were odd. There was the one with a Turkish chap who chased me down the road shouting “Kate! You must KISS ME before you LEAVE ME”, and another that took me to a gay bar and then announced he was bi-sexual usually but I should know that he wasn’t interested in me so maybe we could just have a threesome? (The answer was no, btw.) With one chap we got onto politics way too soon, and he walked out on me in the All Bar One in Crouch End after I told him I wasn’t going to agree with anything to do with the Tories. Then there was another guy who took me to a very swanky bar, ordered my drinks, told me what to eat and how I should consider dressing. Basically a red flag fiesta. Date six was the guy who told me to stay at the table while he went to the bar and then came back singing “WHERE’S YOUR HEAD AT” with wide eyes, so I legged it when he went to the loo and still to this day suspect he had drugged my drink. And finally a recruitment consultant who fucked off on every date we had leaving me on my own in bars, with some ridiculous excuse the next day which I fell for twice and then biffed him off on the third time when he ‘nipped to the toilet’.

I remember speaking to my lovely friend Winsome at work and telling her that I’d had enough and I was resigning myself to cats and loneliness for the rest of my life when a ‘ding!’ came through on my favourites. ‘Mark’ had added me to the list, but he appeared in his photo to be keen on hiking, so that was a straight ‘nah’ from me. But then I looked through his friends, and there was a bloke called ‘Matt’, with very short shaved hair, who looked a bit like Chris Moyles, and had a photo on his profile that indicated he had recently been on This Morning about his drinking habits which funnily enough, were similar to my own. “Hmm”, I thought. “I think I like this one.” 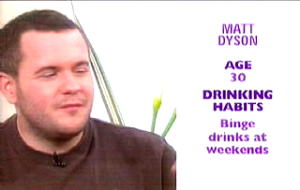 So I favourited his profile, and waited. And waited. And finally, he messaged me. “Hi!” he said. “What’s your favourite biscuit?”. Bloody hell. As openers go, it was respectable on a dating site where usually you get a shit chat up line. “Hob-nobs”, I replied. “I’m also partial to a Jaffa cake but I’ve recently discovered they are not classed as biscuits.” . The banter was on fire, clearly. We then went through the usual work, age, favourite drink back and forth for a couple of days and I found myself refreshing my screen for his reply on an alarmingly stalkerish level. But it always came. And then, on one refresh, the recruitment consultant popped back up.

I VERY STUPIDLY agreed to another date, because I obviously love punishment and being left on my own in bars. (Twat.) Of course,  he did it again, twice, before I finally got my senses together and decided I was worth a bit more than that shit-fest and after all, let’s face it, it’s hardly marriage material when you end every date on your own in the middle of London.

I spent a week with Winsome, bending her ear about how I shouldn’t have gone back to the bloody recruitment consultant twathead and ‘whyyyyyy hadn’t I just focused on that lovely Matt from Xfm’, who seemed so nice and into biscuits? “Bloody hell” she said. “Just contact him, you are doing my head in”. Okay, she didn’t say the last part but I knew, by her eyes, she meant it.

I bit the bullet and sent a message. “I’m really sorry I haven’t been in touch for a while”, I said. I knew I needed an excuse here and ‘I was dating some twat’ didn’t really feel appropriate. “My registration lapsed and I had to wait for payday to start it again”. He took his time replying, but when he did, he suggested we leave the whole messaging thing and just meet up in person. We booked a date.

The week before my birthday, on 4th February 2009, my phone rang. “I’m nearly there, I promise” I said, as I closed the door behind me in Balham, about 25 minutes away from the pub in Clapham and started half walking half running to the bus stop. “I’ll get you a drink in”, he said. I liked his voice. It was a bit northern, but a proper voice. You know, a deep voice. Manly. Not gruff, just normal. And friendly. “I’d love a wine. Only five mins now”, I promised, still fifteen minutes away. My friend Laura phoned me next. “Good luck on the date tonight”, she said. “Remember, don’t go planning the wedding just yet.” She knew me so well.

Matt now tells everyone that I was an hour late but I think he’s probably exaggerating. I remember walking in to the date and seeing him sitting at the bar, wearing a dark green coat, and thinking “I like that back.”. Weird. But I did. He had very friendly eyes, and I liked his build. He was broad, and slightly taller than me. He was good looking and not like Chris Moyles. He had a lovely, open face. He handed me my drink and teased me for being late which in hindsight was definitely chastisement but you know, you have to give them a warning of things to come. I remember talking a LOT and he didn’t say much but there was… something.. There was a weird, natural feeling there, right from the off. Something familiar, and I had this odd sense of building foundations to something. I didn’t think, ‘Oh my god, he’s the one’ but I definitely sensed he was someone special. I won’t bore you with the details, but at the end of the night, he kissed me at the tube and what he won’t know is that I nearly cried, it was so lovely. He was, and is, a great kisser.

(Matt says: “She was an hour late. Thank god I had her phone number although I didn’t realise this would be her first fib about ‘I’m just leaving now’. She sounded alright on the phone so I gave her the benefit of the doubt and as it turned out, it was a good idea in the end.” )

The rest, as they say, is history. We moved in together a year later, and then Matt asked me to marry him two years after that. Bess then arrived in 2011, and we finally tied the knot in 2013, before having Maggie in 2014.

We still occasionally have that conspiratorial moment where someone asks where we met. We got our story straight on date three – “In a pub in Clapham”. It’s not that much of a mistruth. But you know what? I’m not bothered about how we met now; online dating is now the norm, and it brought me my love, my children, and a lot of knowledge about biscuits.