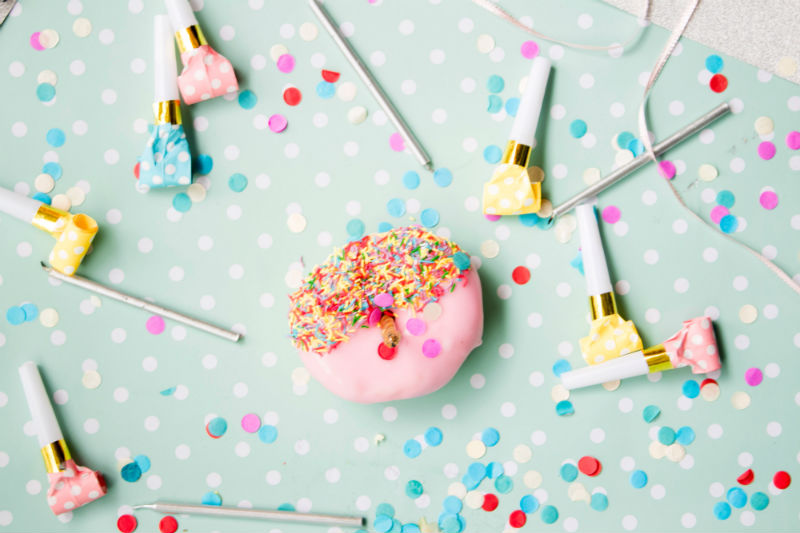 It was my son’s fourth birthday party and I was standing right in the middle of the mayhem, weeping in an embarrassingly hormonal, very public kind of way.

Five seconds earlier, I had watched dumbstruck as the double buggy, on which were piled coats, bags, stuff and more stuff, had, in horror-movie-like slow motion, over-balanced and toppled over backwards with my newborn baby sleeping inside. She was totally unscathed by the experience – didn’t even wake up. I, evidently was not.

In spite of other parents’ slightly nervous attempts to calm me down, I couldn’t stop the dramatic sobbing. The buggy incident on its own was bad enough. But as a newbie parent of a school-aged child, the full-on party experience – soft play, loud songs, jam sandwiches, too many children, too many adults – was just too much for me, two weeks after giving birth, and newly crowned mum to three children aged four and under.

Since then, I’ve developed a rather complicated, love-hate relationship with children’s birthday parties – and these are some of the reasons why:

1) There are too many of them!

Every time you think you’re done with the parties, along come a new round of invites on the class WhatsApp group. I don’t mean to sound ungrateful (or do I?) but can’t we space out the parties to allow for more substantial recovery time for parents in-between?

My dear Eeyore-like hubbie simply ignores birthdays. Although less extreme, I secretly agree with his grumpy notion that like leap years, birthdays should only be celebrated every four years or so. Can you imagine how much time you’d free up on weekends to lay about slothfully in your pyjamas while your children watch Horrid Henry? Plus you’d only have to deal with your own children’s birthdays every four years too. Win-win situation.

2) The scourge of the solo party

Related to #1: So there are roughly 30 children in most school classes. If every parent decided their child needed their own party rather than join forces with other families, that would mean more than half the weekends in the year taken up with ferrying just one of your children to a birthday party. Multiply 30 by the number of your school-aged children (for those with more than one child, of course), and a hapless parent can only shudder at the sheer number of these gatherings they will be subjected to. I propose a nationwide moratorium on parents throwing parties for fewer than three children together. I promise we will all still lavish endless amounts of attention on your child.

Yes, I know they save parents from having to provide the entertainment, I know, I know. But some party entertainers are just plain awful. Too noisy, too loud, too hysterical in their attempts to whip up the crowd, not at all funny and not at all clever. Also, they often seem to lack the ability to crowd control, howling bad jokes into their microphone as packs of rowdy children run riot around them.

And the noise! If, like me, you’re an older mum and feel a tad middle-aged, you’ll particularly relate to this issue. Unlike those innocent gatherings of yore with children in smock dresses quietly passing the parcel, children’s parties nowadays are deafeningly, frighteningly loud. Those party entertainers and their sound systems have a lot to answer for.

Okay, admittedly, many kiddies do love the noise, the riotous games, the cold pizza, the chanting ‘Oh yes you are! Oh no we’re not!’ But there are many notable exceptions. I guarantee that at any given party, you’ll see several children (invariably including my own ones) running in the opposite direction to the noise, refusing to cooperate with the forced fun, and generally looking rather shell-shocked. Case in point: alongside my public histrionics, my son spent most of his fourth birthday party looking overwhelmed and sticking to me like glue.

Also, for a shy child, being the centre of attention as the birthday girl/boy can be an excruciating rite of passage. As a painfully shy child myself, my terror at having to stand up on a chair and sing ‘I am five years old now’ solo still overshadows all my memories of childhood birthday parties.

What is it about some parents, captive audience that we all are together for those two hours of partydom, who seem incapable of passing the time of day with a bit of pleasant chit-chat. They prefer to pretend they don’t know you, even though we see each other EVERY DAY in the school playground, and if forced to talk to you by accidental physical proximity, behave in an awkward, shifting feet manner as your attempts to make conversation resemble drawing water from a stone.

6) My own children suffer from a mysterious party-induced illness

Somehow, while other people’s children seem to remain in good health for the duration of most parties, my own little ones are inexplicably struck down with weird illnesses mid-party. My now-one year old (the newborn in the opening story), who had seemed a bit unwell with a slightly raised temperature before one party, suddenly went all funny and started trembling in a violent and involuntary manner mid-party. (One positive outcome was having to leave the party early and rush off to the doctor.) And my three year old, who had a slight cold, suddenly became all pale, peaky and floppy at another party and proceeded to curl up in her baby sister’s buggy and go into a deep sleep for the duration of the party.

As for my son’s fifth birthday a few months ago, I don’t quite know how it happened but Bad Mummy simply *forgot*” to organise a party. Now if anyone can give me a trick for wriggling out of making a party for his sixth birthday looming on the horizon…Anyone?