Jobs for the Girls 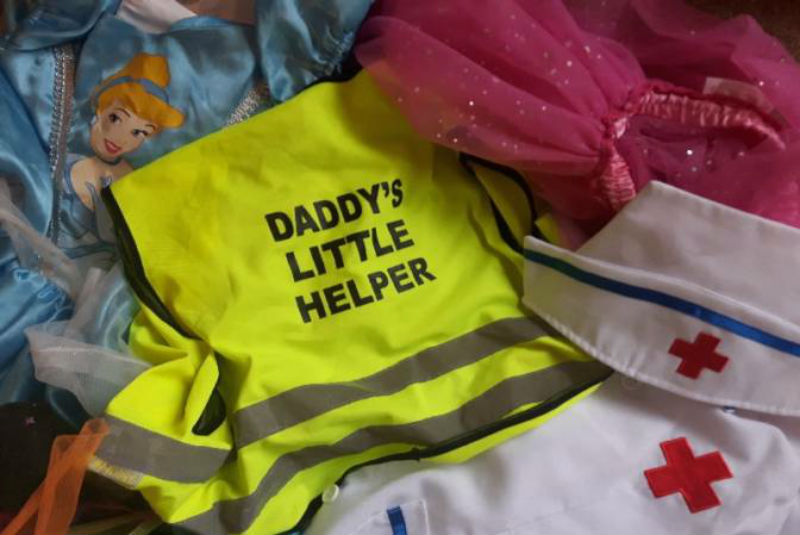 I’m looking out of the kitchen window and smiling as I watch my eldest daughter and her dad in the garden. He has just mowed the lawn and now they’re scrubbing bird poo off the trampoline. She looks much happier being outside with him than inside with me.

I’m chopping stuff for salads and baking a cake for pudding. He’s off to “hunter-gather” now, as he calls it, so I hand over the shopping list I’ve written and they drive to the supermarket for supplies. He’ll stand by the barbecue later, turning the sausages with giant silver tongs. I must remember to ask him to put that new fan up; it’s still in the box, it needs a screwdriver. Now I better give the loo a quick once-over before our friends arrive.

I don’t know where I first heard about the idea of pink jobs and blue jobs but we joke about it and just assume the gender divide happens in every household. After years together, we now just naturally think of certain tasks as things he does and things I do. Obviously I do more. I usually have to write lists and remind him what he needs to do or it would never get done.

The truth is I’m not some miserable, down-trodden, put-upon wife who wants a whinge about the other half or a moan about men in general. I actually love the part I play in our family, especially feeding them all, I’m a bit of a feeder. I’m not chained to the kitchen sink; I go out to work and have the freedom to do whatever I want. There are days though when I choose to put my Cath Kidston apron on and go wild with a whisk or when I want to open my wardrobe and pull out something pink to wear. Even admitting out loud that I like that colour can feel controversial.

I didn’t ever really stop to agonise over these decisions until I became a mum to two girls and now I wonder about the example I’m setting. Should I be stepping away from the more old-fashioned stereotypes I have been content to conform to, in order to show them all that a woman can do and can be?

Members of The Motherload® were chatting online recently about the jobs they do around the home that would usually be on the blue list. I was utterly put to shame by the MOLOs who mowed the lawn, put up shelves, built a tortoise pen and fitted a new loo seat, although this one is the ultimate achievement that deserves maximum respect: “Power to the modern mum. Just cut the grass with 1 year old on my back in the carrier. My next task is to clean cement off the patio. Baby is in the play pen screaming to be allowed to play with the amazingly colourful acid bottle.”

We went over to our neighbours for a play-date the other day and I was amazed by the incredible tree house with rope bridge that had sprung up in their garden. My first thought was “wow, I wish my husband was that handy with a hammer” and then the mum explained how it was her labour of love that she had crafted from scratch. I felt cross with myself for being so surprised and so in awe. Why shouldn’t a woman know about nails other than the ones at the end of her fingers? I’m just not convinced that carpentry is something I would excel at or enjoy.

Maybe I need to man up. It would be nice, when a toy gets broken, not to hear the usual response of “Daddy will fix it” when maybe Mummy is perfectly capable but needs to grow a pair and have a dabble in some DIY. I won’t buy a pink screwdriver though, I promise, even I draw the line at that.

There are days when the dressing up seems to be all about the desire to be a Disney princess but then in the next instant, there’s a costume change or a spark of imagination and you’re confronted by a firefighter or a robot. I had to laugh when my Mum saw our 3 year old walking round with a plastic box on her head and said, “Are you a spaceman?” and she replied with a roll of the eyes, “No, I’m an ASTRONAUT.” Not only does she know the proper word, thank you very much but she knows you don’t have to be a man to do it.

Her telly-watching is mainly CBeebies and Peppa Pig but if she does catch a glimpse of the grown-up news and ask any questions, I will be pleased to point out the lady who is our new Prime Minister to show her it’s not all jobs for the boys.

Just after moving into Number 10, Theresa May flew to Scotland to meet Nicola Sturgeon and the female First Minister tweeted a picture of the pair of them, sending out a strong message to all our daughters: “I hope girls everywhere look at this photograph and believe nothing should be off limits for them.”