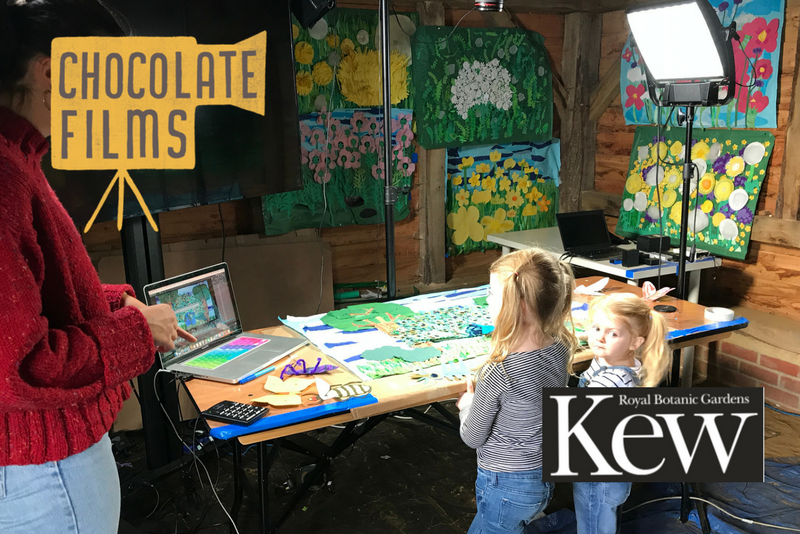 When we lived in west London, we had an annual pass for Kew – it was a quick hop onto the overground and a whole day of picnics and strolls around the wonderful gardens, or exploring the vast glasshouses that house thousands of species of exotic plants. Now we live in Bedfordshire, we don’t go as often, so we jumped at the chance to revisit when invited by Chocolate Films to take part in their animation workshops this summer, nestled in near the Badger’s set at the top end of the gardens.

After a bit of running, jumping, rolling and picnicking, we made our way to the Insect Adventure Camp. As we walked, we spotted bugs and pollinators on our handy guide, and learnt what they do, where they come from and how they pollinate the various flowers and fruits across the world.

Bess took the lead, finding our way on the map to the Green Shelter where we discovered an exciting lodge studio, with craft tables outside as one of the Chocolate Films Animators explained what the process was. Every day, a frame is created by contributors, and then using their animations, that individual frame is created and added to the overall film. To date, over 2000 contributions have been made since the residency was taken up on 22 July 2017.

Chocolate Films Workshops mission is to create a new generation of young filmmakers. This year they were commissioned by Kew Gardens to design, programme and facilitate the largest ever stop-motion animation public engagement project; entitled ‘the Love Bug’. The story features an oil beetle called Violet and her journey through Kew Gardens as she looks for the perfect plant to pollinate. Expert animators from Chocolate Films have been in residence at Kew Gardens for the entire summer, since July 22.

With today’s frame focusing on a peacock, we were given a cardboard tail feather each to design and stick an ‘eye’ on, and then make as eye-catching as possible. While we were doing so, another animator explained to the Bess and Maggie what pollinators were, and got them engaged and guessing different types of pollinators!

After completing our designs, we moved to the studio where the girls could try their hand at stop-motion animation (we couldn’t resist having a go as well!) After carefully positioning a butterfly and bee across the frame, the girls were mesmerised by the playback and the clip they had produced! (You can have a gander at the finished result on our Facebook page, here). Bess declared that she wanted to be an animator and make films when she grows up, and Maggie wanted to be a peacock. (Of course!)

There’s loads going on this summer at Kew for all the family. The Insect Adventure Camp, with the Animation workshops from Chocolate Films is available every day, except Mondays, from 10-4.30pm. Everything is drop-in, so no need to book meaning that this is really flexible and easy for family plans. With crafts, insect trails and even a go at pollinating a flower yourself, it’s a fun-packed, great educational day for the kids.. and perhaps you too.

You can discover more about Chocolate Films Animation Workshops at Kew Gardens  and the Insect Adventure Camp.

Disclaimer: Kew Gardens very kindly gave us free tickets for this trip, but as ever, we review any experience on The Motherload® as truthfully as possible in keeping with our ethos.