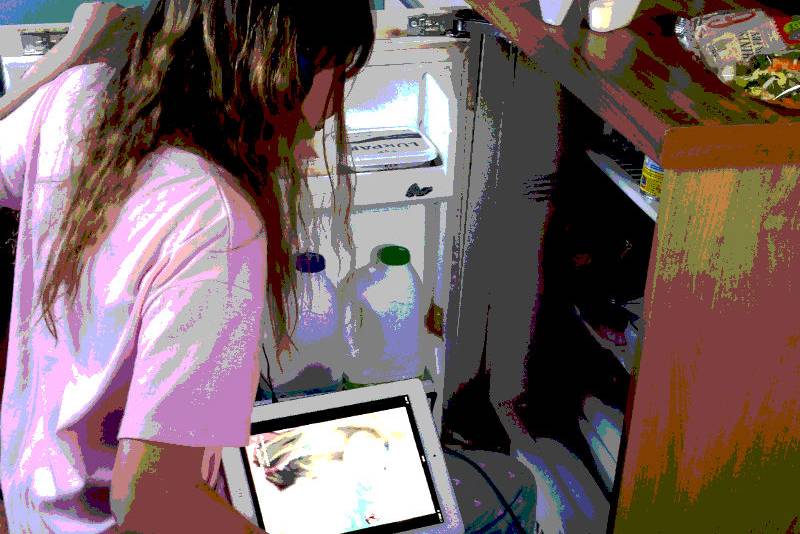 If you think parenting your toddler, Threenager or Fournado is hard work, steel yourself because the early years are nature’s way of laying the preparation needed to navigate the Tweenager years.

Not quite a teenager, your average prepubescent nine-12 year-old can give the tots a run for their money… Tweenagers are notoriously hard work but every age and stage comes with it’s own challenges and it’s own set of pay offs.

1. You are an embarrassment. They roll their eyes and sigh. All the time.

2. They talk to their friends about you, beginning the sentence with; “You won’t believe what my mum said/did the other day”.

3. They may not be into the same things as you. You love fashion, they are mad for biology. It’s called individuality. Try not to fear it. Nurture it. Unless they are thinking of joining a cult. Probably best to discourage that.

4. They have their own tweenager language, particularly the written word where any kind of punctuation is redundant.

Here are a few examples:
Sup. Meaning: How are you?
Wuu2. Meaning: What are you up to?
Chillin. Meaning: Relaxing with my iPad.
Ma/Ya/Ye: Meaning: My/You/Yes.
Thx. Meaning: Thanks.

5. Chances are they will be on a social media platform. They may show you how to use Snapchat but know this – they will jump ship to ‘Insta’ or Vine if you try and ‘snap’ them.

6. In fact they know more about technology than you do. They are better than you at using a smartphone/laptop/computer/sat nav. Accept it.

8. They don’t have boyfriends or girlfriends. (They do, but they’re not about to tell you).

9. The TV is mostly redundant. They watch vloggers (video bloggers) on YouTube. At the drop of a hat, they can divulge the minutiae of Zoella and her boyfriend Alfie’s daily routine. When they grow up, they want to be Zoella, or Alfie. Vlogging is the future.

10. Selfies. Lots and lots of selfies. It’s the reason headlice are thriving. The critters just amble from head to head as youngsters huddle together perfecting their pout.

11. One word. Minecraft. The average ten-year-old loves this video game. It’s like playing virtual Lego to an ambient soundtrack (which will continue on a loop inside your head for days).

12. They might be smarter than you. Don’t forget their brains are sponge-like and more importantly, younger than yours.

13. They still need you… Especially for the money. They still ask for a hug. They might even let you give them a kiss goodbye (or hello) at the school gate (so long as no one’s looking) but there’s often an ulterior motive.

14. They offer to make your bed, wash the pots, walk the dog or vacuum the lounge, then hit you with a pocket money request.

15. Tweenager children will only babysit younger siblings if you bribe them with the promise of money to spend in whatever cyber game they are playing. Note: Cyber money is not free. It requires you to part with actual reddies.

16. They watch the news and worry about world events. From acts of terror to natural disasters, be ready to answer (lots of probing) questions.

17. Being a tween is an emotional rollercoaster. Mood swings – we’re not talking weekly, or even daily – we are talking minute-to-minute Jekyll and Hyde-ness.

19. Holding their hand in public is just about tolerated. Make the most of it while it lasts.

20. Board games are sneered at for being old fashioned but they’ll still want to join in with a round or two of Rapidough.

21. They will listen to bands and musicians you have never heard of through their headphones, some of which will be really, really cool… as in Radio Six cool.

22. They sleep, a lot, sometimes in the daytime and will raid the fridge 30 minutes after finishing lunch. It’s all those pre-pubescent changes taking place in their bodies.

23. They shower – either twice a day or not at all – and obsess over their teeth. They will ask when you will be making an appointment for their first brace-fitting. Braces are ‘way cool’, just so you know.

24. They know about Father Christmas and the Easter Bunny. They just aren’t ready for you to know they know.

25. Fancy dress is lame for your average tweenager, unless it is for Hallowe’en then it is perfectly acceptable to dress as a Zombie Cheerleader or Axe Murderer wearing realistic latex make up which verges on being utterly horrific.

26. Tweenager girls steal your lipstick, black leggings and their dad’s T-shirts (to wear in bed).

28. You will constantly remind your tweenager to take their own advice.

30. Still goofy at heart, they will (mostly) be comfortable making an idiot of themselves and will laugh when they fart, or trip over their own feet. (Some may never grow out this quality).

Sam, 46, is a columnist for the Lincolnshire Echo newspaper and writes for parenting magazine Molly’s Guide. She lives in the beautiful cathedral city of Lincoln, in a house that’s not as clean or tidy as she’d like  with her husband and their two children: A tweenage daughter, 10, and  toddler  son, 2, who is often mistaken for a Tazmanian Devil in supermarkets. She owns two psychotic cats and will settle for chocolate when the Merlot runs dry.