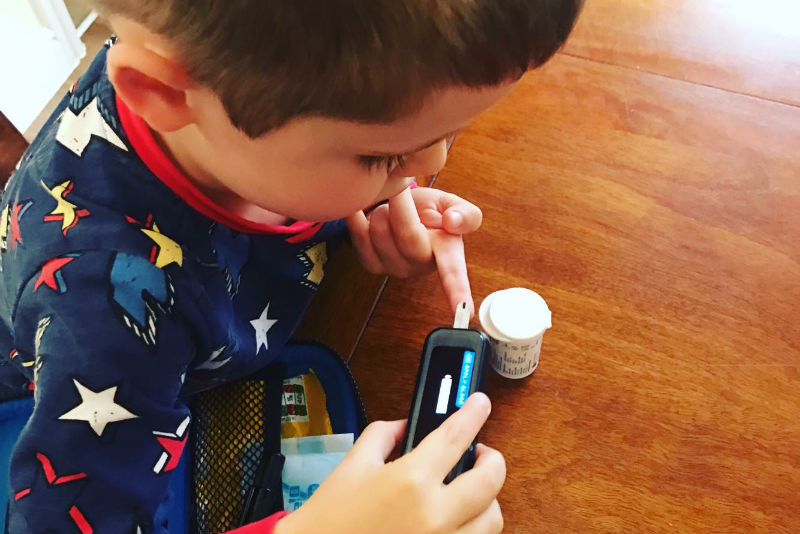 We waved our little boy off to his first afternoon at nursery in a school setting. The start of our son’s journey into education. The start of his independence away from Mummy and Daddy.  Off he went through the gates, with no tears thank goodness.

He ran in wearing his new uniform, with his shiny new shoes and his too-big for him new rucksack just like all the other children.

Only, he isn’t just like all the other children.  His new PJ Masks school bag was full of medical supplies and there was a nurse to greet him at the door.

Finley is a Type 1 diabetic, a condition which requires constant monitoring and frequent intervention to keep his blood sugar levels stable and ultimately keep him alive.  It’s a condition that he will have forever and one that requires frequent and careful management all day, every day.

Handing over the management of his condition to people I had met only once before, and indeed who had never had to do it before, was petrifying.  I would love to have felt worried that he may feel sad without me or that he might not make any friends but the fears that his condition brings eclipse anything else.  Would they notice if his blood sugar goes too low and he needs some glucose? Would they deliver insulin when his blood sugar was high, to stop him feeling sick? Could I expect them to understand the complexities of how different activities would frequently require them to change the way they manage his diabetes?

For the first day at least, the fear was diminished by the fact his lovely paediatric diabetes specialist nurse had gone in with him.  She was reluctant to do the medical training the staff would require before the holidays for fear it would all be forgotten by the time term began.  So there she was on his first day, enduring the noise of 20 three and four year olds so he could start at the same time as everyone else.  She then stayed behind to begin the training of the staff afterwards.

I am completely in awe of the teachers and support assistants who accept that it is now part of their job to administer insulin, do blood tests and count carbohydrates during snack time so that Finley can be there.  I mean I’m in awe of them any way for taking charge of a room full of preschoolers without running away but this is something else!

On day two, after reassurances that I would be nearby and that they would be able to contact me if they needed any thing at all, I stayed nearby for the entire hour he was there.  All was fine, finger prick done and insulin delivered and my heart began to relax slightly!  I doubt whether the dread will ever leave me completely.  Perhaps it wouldn’t even if he was completely well, but I will never know.

My biggest fear though is that sometime in the near future my brave boy, who endures all he has to go through with no fuss, will start to realise he isn’t quite ‘normal’.  As yet, he doesn’t seem to have registered the fact that he is the only one who wears an insulin pump 24 hours a day. It’s about the size of a small mobile phone and he wears it on a belt round his waist so I’m sure it’s only a matter of time before the other children pick up on it.

What about the first time he gets asked to someone’s house for tea and he can’t go unless I go with him?  What about when I’m the only mum who has to stay at every birthday party?  What about sleepovers in the future? School residential trips? What if he doesn’t get invited to these things because of his diabetes?

Starting school brought all these thoughts flooding to me all at once.  I can’t help but grieve for the loss of an easy future for him.  Of course all these hurdles can and will be overcome and we will do everything in our power to ensure he never misses out.  I also know that things could be infinitely worse but that doesn’t stop the pain in my heart I feel for him.

I know there are many others who feel the same way as me.  Other parents who have children with many different medical complexities that make this step in their lives just that bit harder.

I understand the way your heart aches but I also know your pride at watching your little warrior walk through those gates.

Like this? Share it, and spread the MOLO love. You can read more blogs about parenting, and for the latest from The Motherload®, head to our homepage.

I’m a 32 year old mum of 2 boys. Occasional gym goer, regular wine drinker. Can often be found at soft play hiding in he corner with a coffee. You can follow me on Instagram