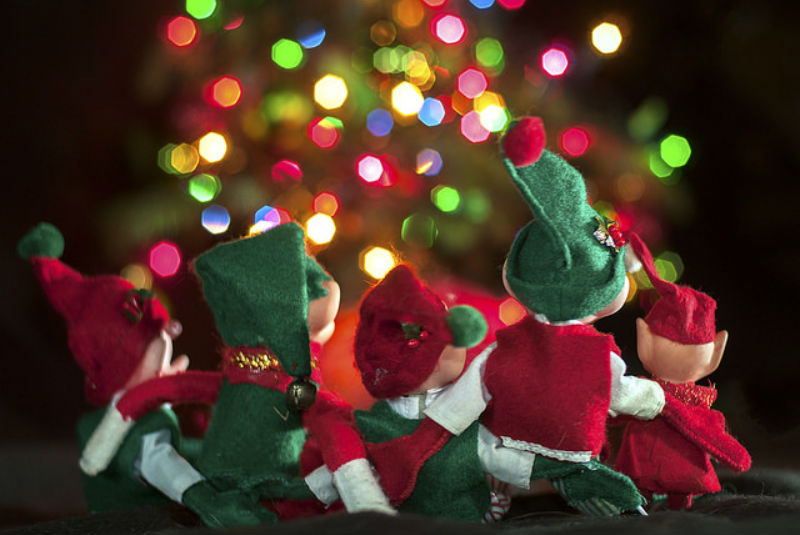 A Pork Farms badge tied up with pink wool, an advent calendar of Santa Claus zooming across a navy sky and behind every door, solstice twinkles in iridescent glitter;  a mohair stocking and a glass paper weight bringing snow for the years it didn’t fall for me. These are the trinkets of my childhood Christmases. Vintage items with no market value but the linchpins of my festive memories and more precious than any trip to Lapland or department store visit to Santa.

What mattered most to me at Christmas was my mum’s Boxing Day buffet with an open door for friends and relatives. Her trolley teas with The Saint on the telly and a tin of Quality Street. Granddad singing Bing Crosby’s White Christmas with a paper hat over one squiffy eye. The 6 ft tree my dad verbally assaulted whilst dragging it in to the house which he later fell in to. Soft wispy fabric that gave the strings of coloured lights their Icelandic frosting.

As young as ten, I recognised how hard my parents grafted all year round to manage Christmas. Butchers work long hours so my dad came home late on Christmas Eve with tassels of mince ground in to the soles of his saw dusty shoes and his hands bled from hours spent gutting turkeys. Friends went on pricy theatre trips to see Peter Pan and sleighed through faux (and real) snowy forests in the run up to Christmas whilst I looked forward to opening my advent calendar once the sun cracked. A woodland animal behind each door.

Although I was raised in middle-class leafy suburbs and we were well turned out, my parents went without routinely to ensure we were well clothed and fed, that we had shoes and text books. It was never talked about, no issue made but I felt it keenly: my working classness, a thing of difference and otherness, and also a thing of great beauty. We didn’t have a car or credit cards or holidays abroad. At school, I was bullied mercilessly by a so called friend who wore high end designer labels. She would mock my cold damp house and what she perceived to be ‘cheap’ clothes and belittled our annual fortnight’s holiday to Chapel St Leonards where some of my sunniest memories were baked.

Now I’ve got my own children, I’m grateful for the simplicity childhood taught me, particularly in respect of my kid’s emerging values. I’d rather puke than give them chocolate for 24 days so they get a paper advent calendar like I did. They ask Santa for a gift or three. We might catch a film at the cinema but often we don’t. We’ll make decorations and listen to Christmas songs and head to the woods rather than braving anything that involves a reindeer being trapped indoors or the disappointment that comes with fake snow. Colour coordinates never make it on to our tree because it gets assaulted with well intended eyesores. Think skewwhiff angel with fractured wing. Then there’s my granddad’s previously pink bauble, so aged now that it’s transparent, and suspended from the same thin strand of cotton he looped with bumbling thumbs.

Make no mistake, I look forward to laughing up red wine with my sister and the kids trying out their new gear and I admire my friend with an alpine working railway and village on her dining table because she works damn hard to see the glee on her kid’s faces. I love to see all the houses with sparkling Yuletide scenes on the front lawns, too.

But I do reckon the advent to Christmas has morphed in to a calendar of extravagant festive experiences. Extortionate trips out. Once in a lifetime gigs where you’re nothing in the classroom if you haven’t gee-d up a reindeer or kipped in Mrs Claus’ lodge. Even the (satanic) elf on a shelf has turned in to a conveyor belt of gifts, losing the value of its initial tame pranks with petits pois and toothpaste. Then there’s the ever growing lists to Santa. It makes me feel nauseous and gutted for children who are overwhelmed by it all, high on the chase for Christmas Day which promises to be a massive anti-climax after such a build up.

Tonight, our street is aglow with electric sculptures of reindeers and a penguin that flashes in all the colours children adore and my son peers out his bedroom window longingly and says, ‘Wouldn’t you love to get a light-up reindeer on our roof, mum’ and I tell him the truth.

I tell him, ‘I’d rather put my ‘Merry Christmas Ya Filthy Animal’ jumper on and watch you stick a tea-light in the B&M Bargains lantern.’

Love this? You can read Rachael’s last blog The Thing About Autumn or for the latest from The Motherload®, head over to our homepage

Rachael Smart is a writer. She also wings it as a mother of two gorgeous boys and is frequently found writing about the mystical world of child-rearing where grown-ups frequently lose their shit (but manage to hide the brown stains remarkably well.) You can follow her on Twitter