Coronavirus: The Kindness Of Us
Maternity Ward Photography: Should We Ban Bounty?
Ten Times MOLOs Made the News 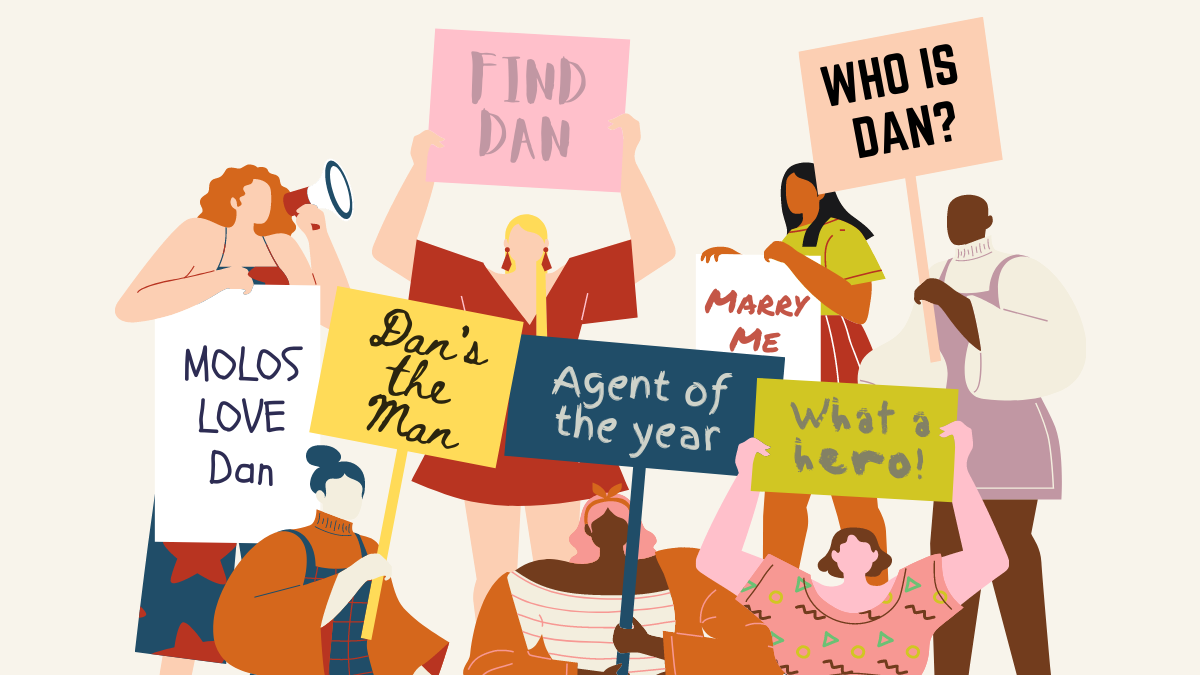 We just HAD to share this brilliant thread with you from The Motherload®’s fantastic Facebook group. It concerns an estate agent called Dan, and mum of Marnie and Elsie, Lorna Hayward, from Wandsworth, London.

Lorna posted on the group:

“This is Dan. He just valued our flat.

I had warned him, that arriving in my only available slot of the day at 5pm was risky.

Nevertheless he rocked up. 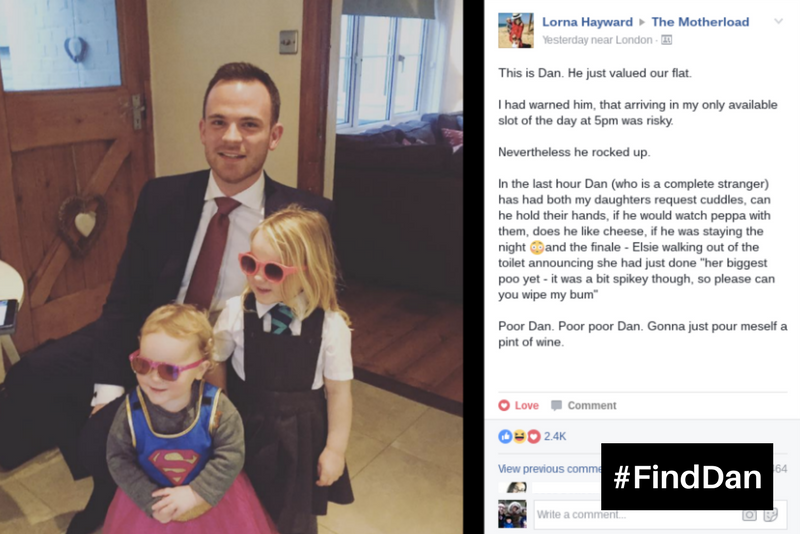 In the last hour Dan (who is a complete stranger) has had both my daughters request cuddles, can he hold their hands, if he would watch Peppa with them, does he like cheese, if he was staying the night, and the finale – Elsie walking out of the toilet announcing she had just done “her biggest poo yet – it was a bit spiky though, so please can you wipe my bum”

The response to Dan was incredible – but Lorna was oblivious to how crazy her post was going – 2k likes, and hundreds of comments led to the effort to #FindDan. And find him they did – a MOLO search effort worthy of the FBI tracked the poor chap down to PurpleBricks estate agent.

Dan, for what it’s worth, you have quite a fan-base on The Motherload® (expect a few calls for valuations) and for putting up with Elsie’s poo story alone you definitely deserve to be Employee of the Month at work.

Dan, we salute you (and we’re sorry).

So, #FindDan continues to go crazy in The Motherload® and beyond! He’s got 2.2k likes in the Facebook group, setting a new MOLO record. This blog post was so popular on Facebook and Twitter that our website crashed – #DanBrokeTheMotherload. And Lorna, who’d gone out after posting her photo last night, woke up to a whole lot of attention this morning! Her first job; to break the news to Dan that he had gone viral…

Here’s what she said…

So, I’m not gonna lie. I woke up this morning with a MASSIVE hangover. I hadn’t thought much about posting the photo of Dan – a natural over-sharer of all things personal, so when I picked up my phone and saw possibly 300 notifications I had a slight worry that I might have done something a little silly whilst inebriated last night. Nope. It was Dan. He was going viral. #FindDan had started and the MOLO’s were out in force. I have honestly not been able to catch up with all the comments, and I cannot believe the number of like-minded muthas who seem to all relate to or find my epic hour with Dan so hilarious. I thought it was only right that I texted what I thought was Dan’s number to let him know about his new internet fame and all that. Then Dan called me.

“Oh, hi Dan – um yeah, so it’s Lorna Hayward, you valued my flat yesterday and you know I said I wrote a blog and would you mind having a photo with my girls, because, well, ha ha um it was a little chaotic wasn’t it and well, um yeah you managed to cope pretty well with my girls infatuation with you – so ANYWAY – the post I shared on a mum site called The Motherload® has been rather popular”

Dan seemed rather unfazed and told me that he had an email from the CEO of Purple Bricks last night saying how he had seen a post and photo about Dan on a mum site. Dan seemed pretty chuffed at that. I also felt it was only right, and fair to the dedicated fans of Dan, to ask if he was single. The answer is YES. Soz Dan, I think you’re about to get a LOT of attention. (Poor bugger…)

#FindDan has made it into the fabulous Closer magazine – and rumour has it that Dan’s MOLO fans might be treated to a Facebook Live Q&A from Lorna’s house next week. Watch this space!

***Okay, this is definitely the last update***

Well not only did Closer run #FindDan, it was also published by the Mail Online (where he kinda went viral all over again – 1.9k shares!) , The Sun, The Mirror, The Evening Standard, Metro, Magic FM and Heart FM. The story even got picked up by the media in Australia and New Zealand

Here’s a pic of Dan and Lorna reunited for the Heart FM breakfast show with Emma and Jamie – great work guys!

Love this? Let’s share it and give Dan a bit of recognition for being such a great sport.
You can read more from The Motherload® Facebook group in our MOLO Community section, and for the latest brilliant blogs from our writers, pop over to The Motherload® homepage. To join the funniest mums’ group on Facebook click here
Thanks so much for sharing this Lorna! You can follow Lorna’s blog, The Mumblings and find her on Instagram

Alison is a radio producer and broadcast journalist, a mum of two and a wife of one. Since becoming a mother she has (mostly) gladly swapped a busy social life of gigs, pubs, art galleries and museums for dancing in the kitchen, drinking on the sofa, finger painting and hanging out at the park. She talks incessantly about not having slept for four years.