The Motherload Guide To: Help! A Lift-The-Flap Book 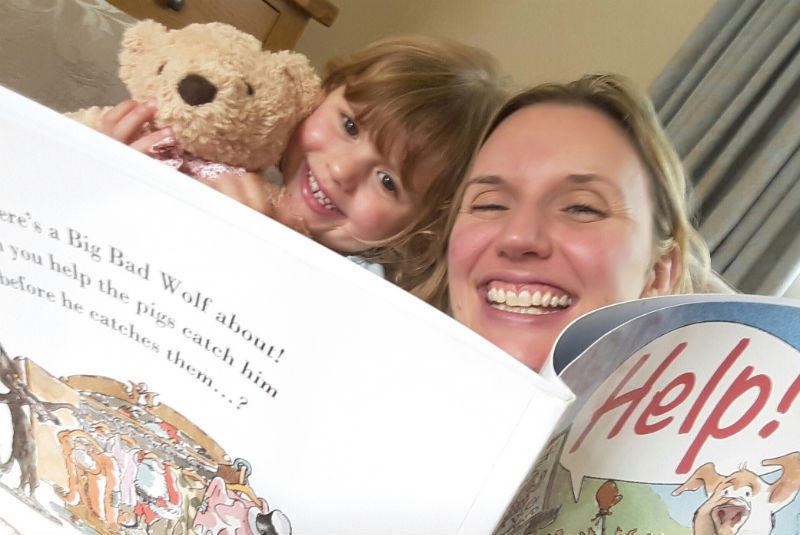 If you asked me what I had read recently, I would glance wistfully at the stack of half-finished novels on my bedside table and instead reel off a list of children’s books. A favourite story is read aloud, repeatedly, until we know all the words by heart and secretly hope it soon falls out of favour. It is always a joy when a new book makes the cut and refreshes the bedtime routine.

I ripped open the envelope and pulled out a copy of Help! A Lift-the-Flap Book by Sally Grindley and Peter Utton. The cover features a crowd of puzzled-looking pigs, one holding aloft a sign that reads: “Wanted! Mr Wolf. Big Reward”. The cartoon illustrations remind me of Quentin Blake’s wonderful work in the Roald Dahl books, full of comic detail. I decided not to read the story until I was with my 4-year old daughter so that we could discover it together.

After settling her baby sister and getting into our pyjamas, we snuggled on the sofa and read one of her current favourites then I told her we had a new book. She knows the story of the Three Little Pigs so it felt familiar to her and easier to engage with immediately.

Help! takes you on an adventure as you join a team of pigs as they try to track down the wolf. The book feels really interactive with flaps to open as the search continues. The story includes simple instructions for children, appealing for their help and asking questions.

Written in a fun, clever style that keeps a brisk pace, readers are encouraged to turn the pages quickly to catch the wolf before he huffs and puffs down any more houses. I found myself whispering when we were told to be quiet and my daughter was drawn in and absorbed by the action. When the wolf was finally caught in a net, she cheered, “Hooray! They catched the wolf. He was naughty and cheeky!”

The pigs have to decide how to get rid of the wolf once and for all so they hatch a plan to turn a seesaw into a giant catapult that sends him flying through the air. As soon as we closed the book at the end, I had a request for the seesaw bit again and this time, when the wolf pinged into the distance, she shouted “BOING!” with gusto.  I have a feeling that ad-lib will get louder every time we read the story.

Daddy hasn’t had a chance to read the book yet but we reckon he will love it as much as we did. This one is destined to be dog-eared.

DISCLAIMER: A free copy of the book was provided but as ever all reviews on The Motherload® are honest in keeping with our ethos.