The Motherload Guide to: The London Transport Museum 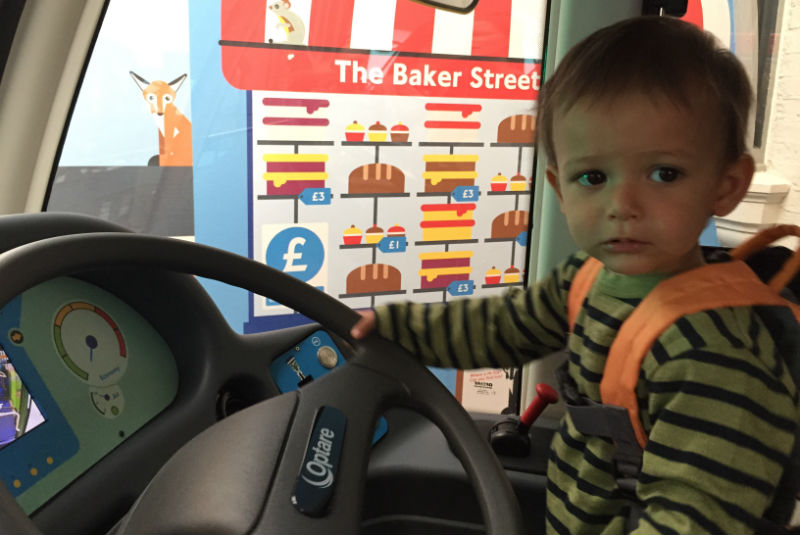 My best friend from school became a mother a few years before I did, and I remember asking her if she ever had any time to herself after having her son. “I’m pretty exhausted in general,” she admitted. “But on Saturday mornings I often get a bit of a break because he and his dad go to The London Transport Museum in Covent Garden. They love it there, and they go all the time.” I was completely nonplussed. Who on earth goes back to the same museum week after week? Just how many trains are there to look at for goodness’ sake?

I clearly didn’t understand the depths of toddler transport obsession. I had a LOT to learn.

So, three years later, when my own son began talking non-stop about buses, I knew it was time for a trip to The London Transport Museum.

The excitement had begun before we had even set foot inside the door of the museum, because its central London location (right in the heart of the bustling Covent Garden piazza) meant that the only way to reach it was – yes, you’ve guessed it, by public transport. For us, that meant a ride on my son’s favourite bus (the 176, since you ask), but Charing Cross Station is just around the corner and there are several tube stations nearby.

Adult tickets cost £17 (Concessions £14.50) but you pay for your first visit and then it’s free to return as many times as you want for the next year. You can also save £1 by booking online before you go to the museum and – crucially – under-18s get in free, which is fantastic.

It is only once you get inside the museum that you realise just how big it is. It is full of double-decker buses, antique stagecoaches and steam train carriages. There is a lift when you first go in which “takes you back in time” to the top floor of the museum which is all about how London’s transportation system first started and is home to some beautiful horse-drawn carriages. You then go down to the middle floor, where you will find a beautiful old-fashioned train, with proper slamming doors, which you can sit in and feel like Lady Mary in Downton Abbey, popping down to London for some sort of glamorous assignation. Next on the agenda is a visit to the special dress-up play zone for toddlers – more of that in a moment – before you get to the real-life double-decker buses on the ground floor.

In a word: yes. The London Transport Museum had a major face-lift just over a decade ago and it is obvious that the designers thought really hard about what would appeal to children, especially the under-sevens. It is like they looked inside the mind of a transport-obsessed child and then designed the perfect place for them to have fun and learn at the same time. The play-zone is nothing short of brilliant. Children can don hi-vis vests and hard hats and get to work fixing a life-like model tube carriage. There is a lost property office to play in, a brilliantly-named model clipper “The Thames Nipper” (geddit?!) and a child-sized taxi. The highlight, by far, is the chance to sit in the driver’s seat of a real bus. I honestly don’t think I have ever seen my son look happier than when he got to do that for the first time.

As you would expect from such a family-friendly attraction, there are baby-change facilities as well as family toilets, a breastfeeding room and a good-sized buggy park. There is a picnic area so that you can bring your own food, but there is also a café which serves good coffee, transport-themed children’s food, and does a mean fish finger sandwich. As with most museums, you have to go through the gift shop to get out, and the LTM’s shop is definitely worth a look – for the transport-themed rubber ducks, if nothing else!

I have to admit that my husband and I were fairly dubious before our first visit to the Transport Museum. Would it really be as good as other parents of similarly transport-obsessed children had led us to believe? Well, I am pleased to say that it was a resounding hit with all of us. Adult tickets aren’t cheap, but we have definitely got our money’s worth by going back several times since our first trip. It is refreshing to spend time in a place that is so clearly designed for young children to enjoy themselves. The fact that under-18s go free is a huge bonus, given that our now three-year-old’s love of buses shows no signs of abating, and his little brother is becoming quite a fan too. When I told him I was writing this review and asked him what he thought, he said: “I have the best days at the bus museum, Mummy.” You can’t argue with that.

The London Transport Museum was not aware that this review was being written and all tickets were paid for. We review any experience on The Motherload® as truthfully as possible in keeping with our ethos. For more information about the museum, visit: http://www.ltmuseum.co.uk/