Handmaid’s Tale: Nolite te Bastardes Carborundorum, Bitches
La Dolce Vita
Berlin Attack: Terrorism Does Not Discriminate, So Why Do We? 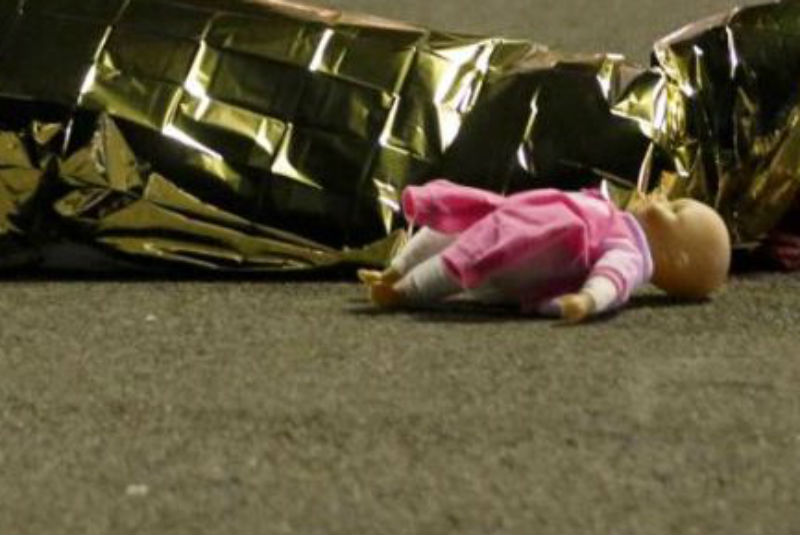 Our day begins, with the sun streaming through the cornflower blue-framed windows, waking us to another glorious day in Southern France. Warmth floods into the room as I open the windows, the air already humid as the breeze gently sways the curtains.

The detritus of the night before – our ‘celebration’ of Bastille Day – lies forlornly on the kitchen table; cheese wrappers, candles, wine bottles and I feel a flash of annoyance that the Pineau has been left on the table overnight and is warm to the touch after heating in the morning sunshine. I fill the kettle, open the coffee, and allow the breeze of the now-open blue glass front door to fill the room with the strong scent of morning routine; albeit Holiday Mode. Something that feels a bit more special than the normal, every-day routine of home. Fresh bread toasts, our host’s homemade jam awaits. Birds sing and the sound of the gentle wind rustles through the trees. Perfection; this is French holiday bliss. I take a sip of the fresh coffee, and contemplate waking my children to start another lovely holiday day. The only plans stretching out before us are pool, barbecue and relaxation, on this, our penultimate day.

Then, I turn on the television.

Horror, terror and devastation fills the screen. What is this? An accident? No, that’s not what it’s saying. ‘L’attaque.’ Attack. Oh god, a terrorist attack. At approximately 11pm, the evening before, as we were winding our way to bed full of merriment and holiday happiness and debating what Bastille Day stood for, a terrorist had ploughed through revellers, holiday-makers, families, men, women and children, all celebrating Bastille Day, watching fireworks and milling around the Promenade des Anglais during the cooler evening. The terrorist had run down anyone in his path with a white lorry, a truck of destruction; with such force that those who were left in its wake had no chance, no escape and no fight to survive. And then, after this trail of devastation, the terrorist got out of his vehicle and opened fire on the innocent crowd around him. There was no mercy; just indiscriminate slaughter. And so his life was taken, by the Gendarmerie Nationale, who plunged a volley of bullets into his body until his life was extinguished too. An eye, for many eyes.

I hear my children rising from their beds, their chatter and giggles at the thought of another day on holiday filling the Gîte, as the television screen fills with images of the victims, lying strewn, haphazardly, chaotically, across the road. A small, pink flip flop, and then a tiny body, covered in a foil ‘blanket’ is shown in the frame, anonymous except for the baby doll lying, glassy eyes open, dressed in a pink outfit, lovingly close to its small owner. That baby doll that would be known by her family with such affection, a source of comfort for their little girl. And I imagine her, that small girl, full of life, and sun, and holiday, smelling sweetly of sun lotion and ice-creams and thrilled to be out at night, watching fireworks with family, friends perhaps, and her precious baby doll. For that to be the last moments of her life; heady, humid celebration, and then, fear. End of life fear.

My heart breaks; a lump forms in my throat, and hot tears fall from my eyes. I sob.

That little girl, like many of the victims in Nice, may have started her day in a similar way to us. Breakfast, croissants, playing with her doll, excited to be there, excited about the fireworks that evening for Bastille Day. The French holiday season is already in full swing here, and she may have been with her family, celebrating France’s freedom, a glorious sun-filled day, on the beach, a leisurely petit dejeuner; perfect French holiday bliss. An evening meal maybe, chatter, the adults enjoying the convivial, laid back vibe of Nice in the cooler evening sunset, palm trees standing proud above her head. A mooch around the shops perhaps, lights along the promenade, the fireworks being brought forward because of imminent rain, feeling the sand in her shoes from earlier; all moments that would be perfect memories for her in the future. How can it be that her life, and another 83 precious lives, are extinguished with such venom, hate and madness here? How can two worlds, one so carefree, one so vicious, collide to such an extent that so many people are affected by sheer terror; from freedom to fear in just a few hours?

My girls appear, each clutching their own baby dolls, ‘Evelyn’ and ‘Baby’, and I turn my face away, so they don’t see me cry. They loudly demand ‘french petal cereal’ and orange juice, and toast, and CBeebies on the iPad. They tussle with each other, arguing between themselves over a toy. I can’t focus, I can’t think beyond the little girl laying on the pavement, not a million miles from where we are staying, her life ended with such brutality.

They see the tears in my eyes, and they hold onto my legs as I reach for cereal bowls. “Mummy?” Bess gently says. “Mummy, what’s wrong?” And I can’t answer. What do I say? How can I tell her about such horror? How do I find the words to convey such unimaginable pain and suffering in any way to a four year old? How do I tell her that this bad man hurt so many people? How do I explain that a little girl, thought to be only a year and a half older than she, has lost her life in these inexplicable circumstances? My mind is fogged with sadness, grief, and fear. I wipe my tears, and pull myself straight. I turn off the television. I gather them into a big cuddle and tell them that Mummy is crying, because of how much I love them. And it’s true. I cry because my love for them makes me so fearful that I want to wrap them up in this cosseted world, in bubble wrap, and not let them out of my sight. That my love isn’t enough to stop these devastating events. That my love is tinged with a sickening feeling about the future, and what it holds in this world where such violence is imaginable.

For Nice, for France, for the victims: Je suis désolée.