Non-Ironers of the World Unite 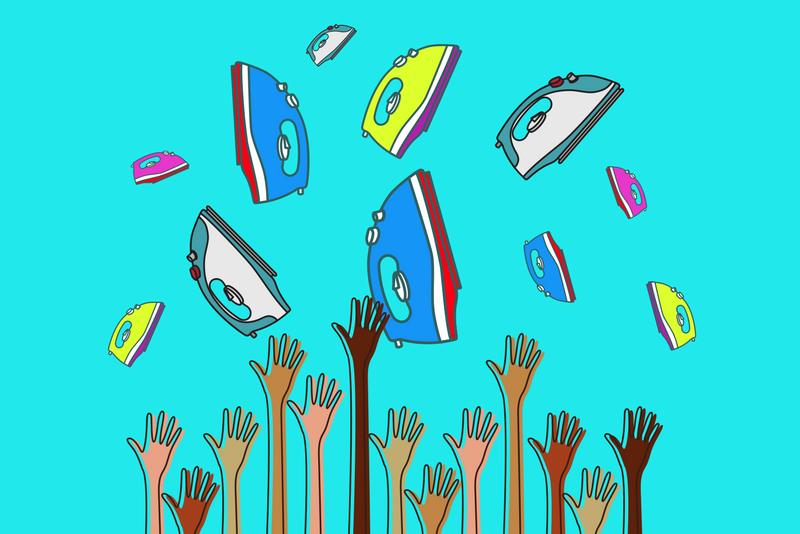 Imagine a life where you never have to do any ironing. Sounds like bliss doesn’t it? Well that bliss can be yours, and there’s very little you need to do to achieve it – simply stop ironing. Giving up ironing was quite probably the best decision I’ve ever made…

I was only ever an ironing amateur really. My stepdad used to buy me a copy of Melody Maker (60p per week) for ironing his work shirts when I was 15, so with such paltry recompense, it’s little wonder when it came to being an actual grown up, I had very little interest in the deed. And let’s face it, once you become a mum, and a wife, you can find yourself responsible for not just five shirts, but five people’s entire weekly wardrobe, for considerably less than 60 pence per week take-home salary.

And did you know, some people even iron pants? Let’s not even go there.

So when I had my first child five years ago, I found I was kinda busy, with round-the-clock boobing, rocking, nappy-changing and general neuroticism. Not to mention the vast, vast quantities of laundry caused by reflux (which lasted an entire year). And believe me, no one uses the word “posset” after three months. I found myself surfing many a tidal-wave of milk-barf, and despite giving the final feed of the night whilst seated on towels and strewn with about eight muslins, there would be another drenched load of clothes, bedding, towels and baby sleeping bags ready for the washing machine every single night.

Sure, I get that ironing is a sign of pride, and of course, clothes and bedding look so much lovelier when pressed with a hot iron. But we’re talking two loads of washing a day and then it all gets drenched again. What’s the point? It was easy to just choose clothes that didn’t really need ironing – stretchy jeans and tops, sweatshirts, and knitwear. There wasn’t much call for crisp, white shirts during the early days of motherhood, and there isn’t now either.

So yeah. Ironing. You can do one.

And I never looked back. Two years and another baby later, we gave up all hope of ever ironing again and put our ironing board out in the front garden for a scrap collector to take. We kept the iron as a token of our former lives but the truth is, I have ironed very little since becoming a mother. Possibly a blouse, mistakenly bought during a memory-lapse where I had forgotten that I do not iron. Soon, these garments are relegated to the “don’t even bother” section of my wardrobe along with all the small-boobs-pre-baby stuff.

Every now and again the iron is awoken from its cold grave, in the cupboard next to the lasagne dishes, to heat-seal my son’s latest Hama bead creation.

“What’s that Mama?” pipes up my three year old daughter, who has never seen an iron.

“This is an iron, darling” I say “Some people use them to make their clothes look nice, but mummy doesn’t bother.”

And hopefully, that is where her interest in ironing will end.

Because if there’s anything that the last five years has taught me, it’s that ironing is a great big waste of fucking time.

I briefly imagine a life with ironing in it. Where I have to iron so many clothes, and all the bed-linen (but never, ever underpants), a life where the washing machine isn’t also the laundry basket which is simply switched on when it’s full, emptied when it’s clean and the laundry put away by the end of the day. I see a life of clothes and bed-sheets piled up, piling on pressure, creating more work and stress, filling time I don’t have.

I posted in the The Motherload® Facebook group about my amusing ironing history lesson with my daughter, and was amazed by the response from fellow mums who had also forsaken ironing, as a futile, relentless and utterly thankless task (and let’s face it, we all have enough of those already).

So, non-ironers of the world unite, unite and take over.

If you haven’t already given up ironing, give it a whirl. You won’t regret it.