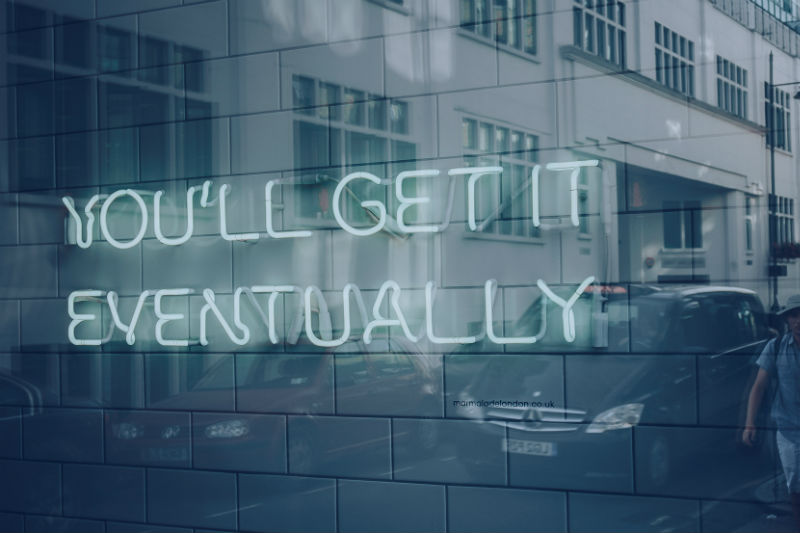 Do you remember that moment at the hospital where the midwives let you take your first child home?

I do. I remember their cheery smiles as they waved us goodbye, our daughter tiny and new in her car seat. I remember fussing over whether she was strapped in properly. I remember sitting in the back, listening to an album that we had picked specifically to bring her home, holding her tiny hand, and everything feeling like a dream, albeit a weirdly specific dream in which I couldn’t sit down properly without wincing.

I remember getting her out of her car seat. Placing her lovingly in her Moses basket.

This pretty much sums up parenting.

You take your first few fledgling steps as a parent. Things become routine: nappy changes become less scary, especially when the gross umbilical cord stump falls off. Bathing them feels less terrifying. Putting them down when they fall asleep becomes slightly easier. You get into a routine with washing up bottles and keeping on top of the laundry and so on.  You don’t always forget to take something vital in the changing bag when you go out for the day.

And then something else happens. And bam! You’re a newbie again.

I remember when our daughter went through a phase of crying incessantly for no reason in the evenings. That feeling of total helplessness and stress and fear. What do we do?

But it passed, eventually.

And then she got older, and we had to wean her. What do we do about that? To puree or not to puree? How long do I have to obsessively sterilise everything for? What will happen if she doesn’t like broccoli? I don’t know what I’m doing.

She ate. She liked broccoli, so all was well. (For the record my son absolutely detests broccoli. I’ve stopped caring so much about the consumption of that particular vegetable.) Then we tried to get her into a sleep routine. I read a book about it. And we tried it. And it didn’t work, because instead of crying and then eventually settling, she just cried until she started hyperventilating. After a week, fed up of all of us crying for something that clearly wasn’t going to happen, we gave up. Now what?

Eventually she learnt to fall asleep by herself of her own accord. But then we had to deal with her crippling fear of people other than her close inner circle. Now I REALLY don’t know what I’m doing.

It’s always evolving. Just like your kids, you will grow and change and develop new strengths and realise your weaknesses. As they grow up, so do you. It’s a never-ending catalogue of new things: transitioning them from a cot to a bed. Leaving them with someone else to look after them. Having another baby, and your first baby becoming a sibling. First days at nursery. At preschool. At school.

Never-ending challenges. Ear infections. Chicken pox. Teething. Mysterious rashes that have you dashing off to the children’s hospital at one in the morning only to be told ‘it’s viral.’ Mastitis.

UGH. Don’t even get me started on mastitis.

Friendships, both the forming and breaking of. Your child’s biggest fears. Overcoming their hurdles. Listening to them cry about something you have no control over. Sending them out more and more into the world without you.

And do you know what? Even if you have another one, there will be things about raising him or her that will be totally new to you. That is extra insulting, because you start to feel confident as a parent and then you get smacked in the face with your own lack of experience yet again. I thought we’d been through it all by now!

Nope. Kids will always throw you curveballs. (Just ask the parents of teenagers. They get it more than anyone.)

There’s a temptation as a mother to act as though you’ve got it all worked out. To not appear flustered or stressed or, heaven forbid, out of your depth. Because all the other Mums seem to have it worked out! Except, they don’t. Nothing starts a conversation at a toddler group like the confession of a person who just genuinely doesn’t know how to deal with tantrum throwing/toilet aversion/food flinging. Some of the most reassuring conversations I’ve had have started this way: with the simple confession of ‘I’m in way over my head here’. And it’s not necessarily advice that I want, although it’s appreciated (mostly) – it’s the comradery. Nothing makes me feel better than when another parent says ‘ugh, we’ve got that problem too, I don’t know what to do about it.’

That’s why I started trying to push myself on my blog to be as honest as possible. In the hope that maybe it will help someone to feel less alone. Frankly, I tried for about five minutes to maintain an image of perfection, and then decided it wasn’t for the likes of me. It’s just too hard.

The good news is, you’re more capable of dealing with these scary new things than you give yourself credit for. I know, because I’ve realised I’m capable, believe it or not.

But it’s okay to be new at something.

So if you’re reading this and your child has just shouted at you, or eaten a pot of Sudocrem, or confessed something to you that they’re really struggling with, and you’ve taken a deep breath and braced yourself with the brief thought of oh no, now what do I do? then remember this:

You’ve got this. You’ve faced new challenges before. You can do it again.

You are not alone.

Like this? Share it, and spread the MOLO love! You can read Megan’s last blog Seven Myths About Stay at Home Mums and for the latest from The Motherload®, visit our homepage

Hi! I’m Meg – wife to Chris, mother to our three year old daughter and five month old son. I am a writer, bookworm, Christian, feminist, and sleep enthusiast! You can read my blog and follow me on Twitter!