The Motherload Guide to: the Pay Rise Accelerator 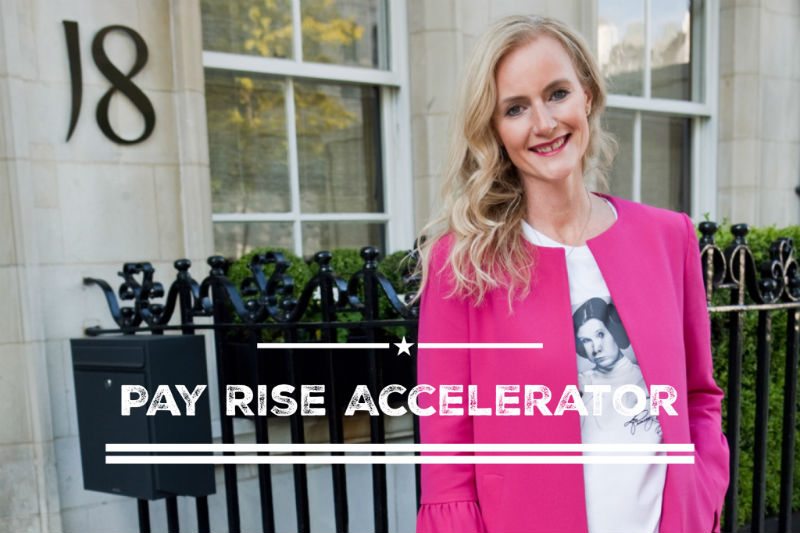 Asking for more money from your employer can be really daunting, and let’s face it, many of us won’t have seen a big increase in our pay since the financial crash of 2007. So we’ve been talking to Catherine Davies who runs a six week online programme called the Pay Rise Accelerator. She teaches women how to negotiate a pay rise so they can get paid what they’re worth and narrow the gender pay gap one woman at a time. So far this year, a small group of five women doing the programme have collectively had a pay rise of £115,000. Amazing! But how on earth do they do it? Catherine explains…

Times are hard with my employer – can I really get a pay rise?

Yes definitely!  I’ve seen people negotiate pay rises in lots of different organisations – public and private – in the current market. If you’ve been bobbing along on the same salary for a while, maybe it’s time for you to think about how you can add more value to your organisation, whether that’s bringing in money, helping your office be more efficient or helping your organisation have more impact. Those are the sorts of things that are the starting point for a conversation around a higher salary. And if that doesn’t work, maybe it’s time to move jobs – that’s where the big pay rises are. I helped a client get a £35k pay rise this year going down that route.

I feel so awkward talking about money though – how can I get over that?

Most people do! The best way to deal with this sweaty palmed situation is to prep really well – this helps take the emotion out of the situation. So much of the conversation is in the planning. I help my clients focus on the facts – their value add to date, their plans for the future, the market rate for their role.

How do I prove I’m worthy of a pay rise?

The best way to do this is to think strategically. What is your organisation trying to do? What are you doing to help deliver those strategic goals? A lot of people make the mistake of listing the things they do without linking what they do day to day with their organisation’s strategy. Can you think yourself into your manager’s position? What are their challenges? What are you doing to help? If you can shift your perspective a little, you are a lot of the way there. And get support from people who make you feel good about yourself. Hanging out with a few people who believe in you and who have your back can make a big psychological difference.

I don’t know how much my co-workers are on, can I find that out?

Some people think it’s illegal to talk about salaries with co-workers. It isn’t but many people feel uncomfortable about it. If you feel ok asking a colleague then go ahead. If not, organisations are now required to publish their gender pay gap figures so that will give you a rough sense of what’s happening in your organisation If you google gender pay gap publication, you’ll find more information. It’s also quite easy to find out what close competitors are on and industry rates if you look online. Joining associations in related professions (e.g. law, marketing) offers a great opportunity to to network with peers in similar roles. Associations often produce salary reports too which are helpful for benchmarking and evidence for your pay rise business case.

How much should I ask for? Isn’t it a bit cheeky to ask for a big pay rise?

The best advice I ever heard on this was to ask for the biggest number you can say out loud without laughing! Research the going market rate for your role online and then come up with a range of about £5k that feels comfortable to you. You need to sound credible so if you don’t believe you are worthy of a particular salary, don’t ask for it. Equally you can probably add on about £5k to whatever number you start with as we tend to be too modest!

I only work part-time. I can’t expect more money can I? They’re already doing me a favour with the flexible working!

I see this a lot – part-time or flexible workers often feel so grateful for being allowed to work part-time they they stay at the same salary for years. You’re working for them so it’s a mutually beneficial arrangement! Don’t let flexible arrangements put you off! Write down 5 things you did this year at work that went really well. What results did you see? What skills did you use? What feedback did you get? Still feel like they’re doing you a favour?

What if they say no?

We’re aiming for a win-win situation here where you get paid what you’re worth and out feel motivated, engaged and proactive. Your employer wins because they have an employee who is engaged, putting in a lot of effort and delivering results. That’s really what the conversation is about. So if the answer is no, it’s unlikely to be about you, the employee. And no-one will think badly of you for instigating the conversation. If the answer is that it isn’t possible because the timing is a bit off – perhaps your organisation is over budget or hasn’t hit its targets – then ask to talk again in, say, three months. If it’s a flat out no – not now, not ever, then perhaps it’s time to call the recruiters.

You can find out more about the Pay Rise Accelerator, and Catherine, who has worked in the public and private sectors.