A rare ‘nailed it’ moment
10 Ways To Keep Your Toddler Entertained During Lockdown
Endometri-WHAT? 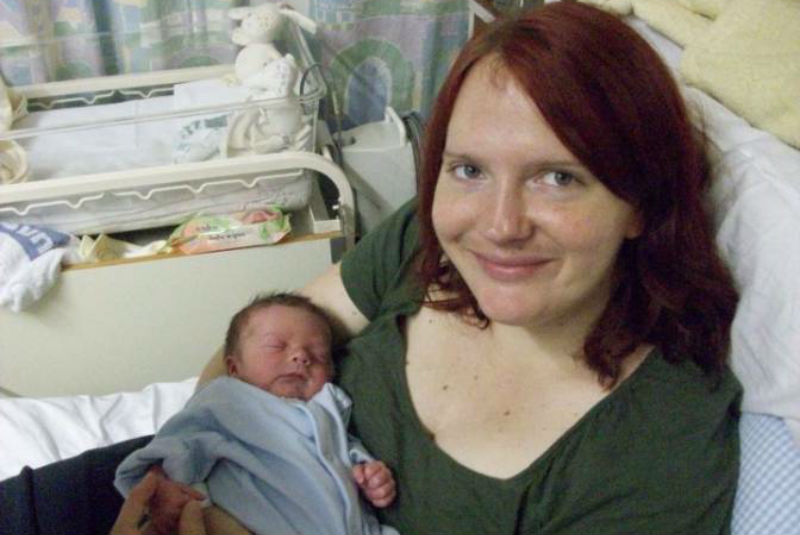 I breezed through the majority of my first pregnancy back in 2010 with the blissful naivety of someone who didn’t know any better. Of course I knew that sometimes things could ‘go wrong’ and that sometimes terrible things happened but as the weeks passed uneventfully, I continued counting the days to the start of my maternity leave when I could finally put my feet up and relax before the baby arrived.

2010 may as well have been the dark ages in terms of accessing information as easily as we take for granted today. I had no smartphone so had to go to the trouble of logging on to the desktop computer we had then to go online. I was on Facebook but had been nowhere near Twitter at this point and my blog was three years away from going live. The only interaction I had with other mums was on a BabyCentre forum where we all shared stories of swollen ankles and dodgy pelvises, with whimsical little tickers at the foot of our posts showing our individual countdowns to B-Day.

I got most of my pregnancy education the good old-fashioned way: from a book. (Apparently you can still get these things in some shops. They take up more space than a phone or tablet but some of them even have pictures in!). I would read ahead through each trimester, taking in the information and remembering what I should and shouldn’t eat, and how I shouldn’t take ibuprofen and that everything would most likely be FINE. I largely ignored a separate section at the back of the book, ‘When pregnancy isn’t straightforward’, as obviously everything was going perfectly straightforward, thanks very much.

At my 36 week routine midwife appointment, things weren’t straightforward anymore. My blood pressure was slightly raised and there was more than a trace of protein in my urine sample. Had I had any headaches? Any disturbed vision? Pain beneath my ribs? Swollen hands or feet? All a resounding no. I felt fine. The following day I had to pick up an enormous plastic container from the hospital in which to collect the next 24 hours’ worth of urine. I took it to a pub quiz that evening and kept it in the boot of the car.

The next morning I dutifully returned my watering can full of pee (with the lid screwed on very tightly) to the pregnancy assessment unit and they took it away to test just how much protein there was in my urine – FYI, there shouldn’t be any – and I had to sit down for some blood pressure monitoring. Still, I was expecting to be back at work by late morning.

I wasn’t. By lunchtime I was lying on a bed on the antenatal ward strapped to a CTG machine continuously monitoring my baby’s heartbeat and movements. I had been admitted, along with the stark statement that I ‘wouldn’t be going home before the baby is born’. I was to be induced, sooner rather than later.

None of this was how I envisaged the end of my pregnancy. I wasn’t ready, I wasn’t prepared. I didn’t truly understand what was going on.

The reality was, my baby was in danger. His growth had slowed at some point as my placenta began to struggle and he was going to be born small for his gestational age. He was technically IUGR (intra-uterine growth restricted) due to the pre-eclampsia. When I reached 37 weeks, he was better off out than in.

The gentle water birth I had envisaged was well out the window. Everything about my labour was to be carefully managed, from the pessary to the artificial breaking of my waters, to the insertion of a syntocinon drip to kick-start the contractions which evidently had no intention of kick-starting themselves. Confined to my bed with a cannula in one arm, a blood pressure cuff around the other, and a fetal heart monitor permanently strapped around my belly, I was trapped and frightened and in a world of pain, with my blood pressure spiking dangerously high.

But then he was here. 5lb 9oz of skin and bones; tiny, perfect, alive. I held him on my chest in shock, physically shaking. I have sketchy memories of these moments when I first held my son, before I was stitched up and left on the bed to rest while my husband cradled him in a chair beside me.

Everything had not been ‘fine’, but we had both survived the ordeal.

As I discovered when I read more about my condition in the weeks that followed, many babies and some mothers don’t. My pre-eclampsia was late-onset and detected in time for my baby to be delivered safely and without the need for special care. My good friend Leigh Kendall, who blogs at Headspace Perspective, developed the related condition HELLP syndrome at 24 weeks pregnant and almost lost her own life. Her precious baby Hugo lived for 35 days but was simply too small to pull through.

I only got to know Leigh as a result of our adverse experiences. Sadly, I also now know too many other women with far more traumatic and tragic stories than mine.

Over two years ago now I answered a call on Facebook from a woman running a small charity asking for help with their social media. The charity was MAMA Academy and the woman was Heidi Eldridge. Heidi had lost her first son Aidan in May 2009, at 36 weeks gestation. At the same routine midwife appointment that had detected my pre-eclampsia, Heidi’s midwife could detect no heartbeat. Aidan was stillborn weighing just over 5lb, similarly growth-restricted to my own son. His death was ‘unexplained’, although Heidi recalls that she couldn’t remember when she last felt him move prior to being assessed by the midwife.

Pregnancy is not always straightforward, and it doesn’t help anyone to pretend otherwise. Heidi set up MAMA Academy to make sure mums and midwives alike are aware of the warning signs of things no longer being ‘fine’, with two key elements being awareness of babies’ movements, and detection of growth restriction – both important early indicators of a baby in trouble.

MAMA Academy has gone from strength to strength since I first started volunteering for them, most notably through the success of our Wellbeing Wallets which are supported by NHS England, and I’m now a trustee of the charity. Our aim is to educate women who now have smartphones and social media, and make sure they don’t ignore the back of the book stuff that they really need to know about.

We aren’t naïve enough to think that every adverse circumstance can be prevented, but lives genuinely can be saved if mums-to-be and their caregivers are a bit more forearmed, educated and prepared. Knowledge is power after all.

Find out more about MAMA Academy at www.mamaacademy.org.uk

If you’ve been affected by a traumatic birth experience or pregnancy complication, you might like to follow @MaternityMattrs on Twitter, which I collaborate on with lovely Susanne Remic of Ghostwritermummy. The weekly #BirthTraumaChat takes place on Mondays at 8pm.

When she’s not in the office or busy doing ‘other stuff’, you can probably find her in soft play with an almost toddler and an excitable nearly-6-year-old.