Kids in Bins and Other Questionable Practices 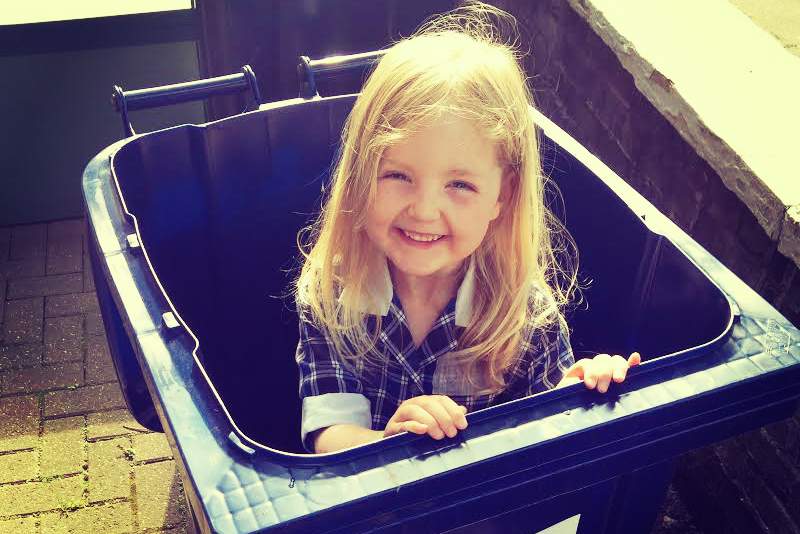 Does putting your four year old inside a wheelie bin for the sake of an Instagram photo make you a bad person?

And does it change anything if the photo gets a load of likes?

I should add that the wheelie bin in question was brand new. So sparklingly clean that I would’ve happily eaten my dinner out of it. So I had fewer qualms about putting my eldest daughter into it than if it had been full of fish heads and soiled nappies.

Nevertheless I can’t help feeling a pang of guilt about it. I sold the whole stunt to her as a bit of fun but isn’t it a bit more sinister than that?

Sure, it’s not at the top of the bad parenting scale, jostling with leaving your toddlers to babysit one another while you go clubbing or hiring them out to a St Giles pickpocketing gang, but it isn’t going to find its way into any parenting best practice manuals either.

My parents certainly never did anything like it to me. Granted, Instagram wasn’t around in those days, though likewise I haven’t come across any such pictures in the family photo album. In fact, the worst I’ve seen is a photo of my brother and I in matching green and yellow tracksuits at the Lord Mayor’s Show (yep, that’s right, in public). Yet I’m fairly sure our parents dressed us up in the same clothes because they thought we’d enjoy it as opposed to any deep-seated desire to humiliate the pair of us.

If it were only the wheelie bin I could probably reconcile it but I’m barely scratching the surface. I have more of these photos than is strictly healthy – of my eldest daughter straddling the roof of a Wendy house, sat inside an IKEA bag, wearing one of her baby sister’s nappies on her head like a Dutch bonnet. It’s all great visual material for the bride’s father’s speech but I wonder whether she will see it that way when she’s old enough to know better.

At least I’m fair with it. Both my girls get the same treatment. Our youngest isn’t yet one but I’m already hyper-vigilant for any opportunities to get “amusing” baby photos. In fact there are occasions when the photo opportunity is my raison d’ être for taking her out of the house.

Is that so very wrong?

Photos are one thing, but you can have so much more fun with your kids than that. Take lemons. The expressions that babies produce when they eat a slice of lemon are hysterical. If you haven’t tried it, you should – as I do frequently.

And alcohol. I’m never one to miss an opportunity to give the kids a drink. There’s little more amusing than a child’s reaction to hard liquor. Ok, I’m not talking about breaking open the schnapps with the girls, but I rarely resist the urge to give one or other of them a sip of whatever I’m having. Our youngest tried beer for the first time last week. Her reaction beat lemon-face hands down.

I can’t decide whether these puckish little games that I play make me an awful human being and necessitate the involvement of Social Services or if this whole article is simply a ‘humblebrag’.

Am I actually reinforcing my vastly superior parenting skills by focussing on the few things I do that fall beneath my own high standards? Perhaps I can confess this stuff because it’s the worst that happens to the girls. After all they get fed and clothed most days and the eldest makes it to school more often than not.

Life could be a lot worse for them, nevertheless when they grow older are they really going to thank me for the memories I’m creating?

Someone please tell me whether I’m genuinely an awful father or if the advent of smartphones and the trend towards laidback parenting means that ritual debasement is something that every parent lays on their children these days.

Ian lives in West London and is father to a pair of princesses (at least that’s what they’d have the world believe). He’s currently taking a break from his real life to be the girls’ primary carer while his wife does what traditionalists would have him do and goes out to earn a living. Spending the extra time with the girls has been about the best thing he’s ever done. So far no one has lost an eye but there’s still time. Ian writes a regular blog, Dad vs Daughters, and is Instagramming the life out of the girls while they are still allowing him to take photos of them.