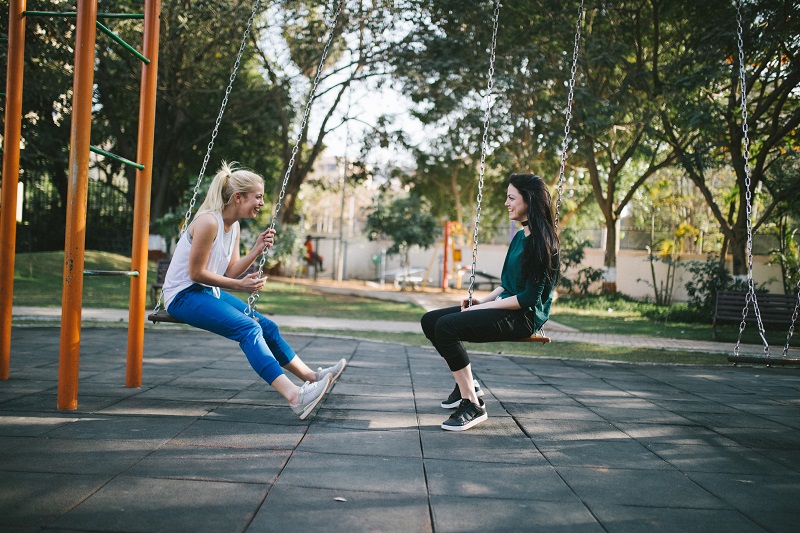 Meghan Markle faced yet another bashing in the press last week for “abandoning” baby Archie to jet off to New York to watch mate Serena Williams play tennis.

I know how she feels. Not the ‘being a princess and having a wardrobe worth the price of a four bed house in Hackney’ bit, but facing criticism and outright mum-shaming for leaving her child behind to have a bit of ‘me time’.

The thing is – a night out just doesn’t cut it if you want to feel like ‘Me’ again and not just ‘Mummy’. However meticulously you plan a Girls’ Night Out you’re guaranteed to have a baby puke milk on your shoulder, or come down with a suspicious looking rash, three or four seconds before you’re planning to walk out the door. Mum guilt sets in and you decide its actually better if you stay at home ‘just in case’. Nobody minds because it means they don’t have to pound the pavements at 10pm trying to get the little sweetheart off to sleep.

But if you’re away, it’s different. You can really switch off. Of course you’d jet back in a millisecond if anything serious happened, and you have all sorts of emergency plans in place, but people – and by people I mean other people who love that child almost as much as you do – won’t bother you. They want to spend time with your child, and they love you enough to want you to take time out too. They’re not going to demand you jump on a plane home just to check if that last poo really should be that colour.

And if you’re only away a night or two you can totally get away with expressing into a pump every few hours to relieve that awful full-to-bursting feeling breastfeeding mums endure. I expressed into a nightclub toilet when my son was four months old. It was my first night out since having him and it was a potential-leakage emergency. I don’t recommend pointing your nipple down into a public loo and squeezing in time to the Black Eyed Peas, but needs must.

So you get away, and you get a break. Yes, you spend most waking hours thinking, or talking, about the child you’re missing, but after the initial anxiety and panic, you actually relax and realise you were a person before they arrived, and you can be that person again. Top Tip: A wine on the plane always helps you arrive at this conclusion a little faster.

By the time my kids were out of nappies they’d experienced several foreign holidays. But while I enjoyed our trips, they weren’t holidays for me. Taking a toddler on a plane can be tantamount to torture, and that’s before the dicky tummies, shifted sleep patterns, and over-excitement kick in.

And forget it if you think you might get a few hours respite during your week away. It’s not until they reach Kids Club age that this particular Holy Grail even seems possible.

So last year, for my *cough* 40th birthday, my husband booked us a mini break to Italy, just the two of us. I couldn’t have been happier, until I stopped to think about what it meant.

To escape and celebrate this momentous occasion meant we had to leave our two children in the care of someone else for a full four days. We would be in a different country, and if we died, they would become orphans.

Other mums recoiled in horror as I revealed my decadent and selfish intent, but why?

Would we traumatise our kids forever by disappearing from their lives for a full four days? Will baby Archie forget who Meghan is before she returns (on a charter flight, of course) to their Windsor home?

Well probably not, but that’s not how I felt when another Mum asked ‘But don’t you feel baaaaaad?’.

The judgement poured upon me by other parents reached gargantuan levels. There’s the direct: “Well done you, I could never leave such young kids for so long”. And then there’s the more subtle (as a brick) “Wow, you’re really brave…. Have you written a will?”

Because by travelling to another country to enjoy her life as a person not just a parent, Meghan has opened herself up to all the ‘Bad Mom’ accusations.

Her plane could crash, her hotel be bombed, her baby could develop a sudden illness and she’d be on the other side of the Atlantic doing yoga with her mates.

But how likely is that? Really? And isn’t it better she reclaim some sense of identity before returning to full-time, all consuming, Mummy duties.

Is it some form of misguided affection that people worry so much about Meghan’s mini-break and its impact on her child, or is it just out-and-out jealousy? I don’t remember Kate facing such a backlash when her and Wills left a seven-month-old baby Prince George at home to sun themselves in The Maldives.

I say fair play to Meghan. Go away, enjoy a bit of me time, and come back refreshed, revitalised and ready to face those sleepless nights again. Although maybe that’s not such a problem anyway. If only we all had access to round-the-clock childcare. But that’s another story entirely…