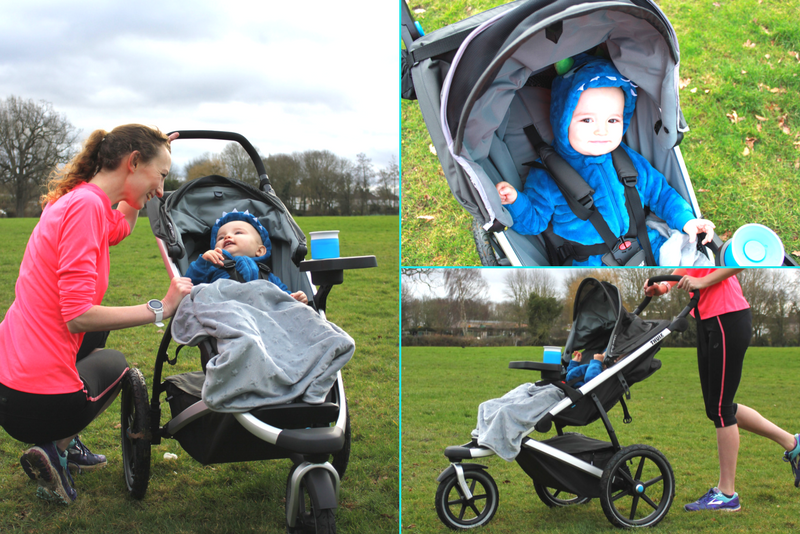 Finding a way to keep fit once you’ve had a baby can be difficult, especially if you were very active prior to your pregnancy.  Having a baby causes a huge change to your lifestyle, and activities which were once important can fall by the wayside.

I took up running when my oldest child was one, but then had to give it up again quite quickly after falling pregnant with my youngest.  I found that I really missed the freedom of running and the chance to go out and clear my head on my own.  The house started to feel like a bit of a prison and I was chomping at the bit to get out and run again.

Luckily, there are ways to continue running once you’ve had a baby.  Running buggies are more widely available now than they have ever been, and it is not uncommon to see parents out jogging with their children in buggies.  The Thule Urban Glide pushchair is an ideal way to take your new arrival out in the fresh air whilst you get a brilliant workout and the chance to regain some of your previous self.  Swedish-made, the Urban Glide is light and easy to handle, plus a safe and comfortable ride for your little one, although it is only suitable for children from the age of six months.  The Thule Urban Glide can also come as a side-by-side double buggy (Urban Glide 2) for families with more than one child.

I was really impressed with the Thule Urban Glide when I unpacked it.  It came folded and only needed minimal construction before I was able to open it up and give it a whirl around my lounge.  My first impression on pushing it was that it was very light and springy.  I added a child to the mix and stuck my one year old in the seat, expecting this to have a huge effect on the handling, but found very little difference, apart from the added weight!  I was really pleased with the size of the large storage compartment under the seat; it’s a great size and also is completely covered so things can be transported safely without fear they will get lost on the way.  The brake is operated by your foot and is located centrally between the two rear wheels.  This was easy to use and I don’t feel that I needed a hand-operated lever which some running buggies have instead.  There is a large retractable canopy which will come in useful for various different types of weather, but the rain cover is sold separately.

The Thule Urban Glide has large wheels with air-filled tyres; think kids’ bike sized wheels.  These are key to the handling of the buggy and what makes it feel so easy to push.  The name isn’t a misnomer, the buggy really does glide when it is on the flat.  It can be pushed one-handed, using the safety strap around your wrist to ensure that the buggy won’t roll away in the event of a trip.  I found that the ride on the streets, pavements and paths was very smooth and quite quickly, I was running at a pace one minute per kilometre slower than my usual pace.  It will take me much more practice to run as far as I can run on my own, as running with a buggy requires greater upper body strength.  That’s fine though as my running buddy likes stopping off at the park to go on the swings halfway around!

One thing that took some getting used to was having to keep the front wheel locked into position when running.  Initially it felt completely alien to have a fixed front wheel and I found turning the first few corners to be a complete challenge! However, it didn’t take very long to adjust myself to turning efficiently with the wheel locked and by the time I had run my first mile, I was able to do it without giving it any thought.  I really liked the fact that the Thule Urban Glide has a big, obvious locking mechanism for the front wheel that is really easy to use, yet very secure.  Some dedicated running buggies do not allow the front wheel to free spin at all, which can be difficult when using the buggy for any other purpose, but the Urban Glide gives you the flexibility to use the buggy for everyday use by unlocking the front wheel.  I found this particularly useful when running to the park: I’d lock the wheel to run there, then unlock it whilst we were walking around the park and going between the swings and the slide.

Whilst running on the trail, manoeuvring the buggy is as easy as running on the path, albeit requiring some extra upper body strength for undulations.  I found the buggy was really responsive when I was running on grass and it would be ideal for using at park-run.  The suspension is really springy but Rory was held firmly in place by the harness, which has a wide waist strap to minimise turbulence. We also had the additional snack tray accessory which has held Rory’s water cup throughout all of our runs without any mishaps.

Disclaimer: Sample was provided and kept as compensation for this review. However, as with any review on The Motherload® Guide, the findings are the true opinion of our reviewer.

The Thule Urban Glide retails for approx £435.00 and comes in a variety of colour ways. More information can be found on the Thule website – www.: For more great reviews, check out The Guide!