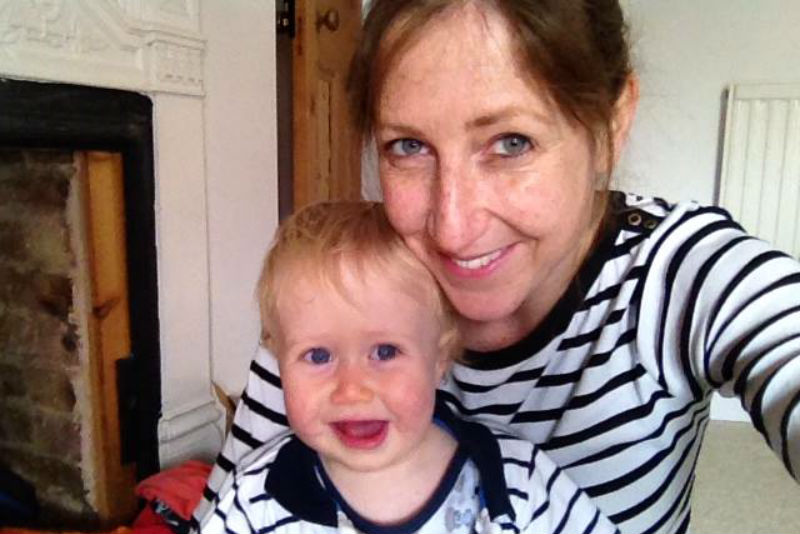 He’s blonde haired, I’m a sort of gingery brown. I have my mother’s thin lips – he’s like a young, pouty Mick Jagger. My nose is a tad ski-jumpish, his is cute as a button. His eye colour is a gorgeous baby blue (the same as his dad’s) whereas mine is a murky grey-green colour.

And you know what? The actual fact that he doesn’t look like me isn’t really a problem for me. He looks how he looks – his own wonderful little self.

What did get to me when his face changed from squished newborn to expressive baby was people continually telling me about how little he looked like me and how much he looked like his dad.

In his first year, it was almost constant;  “Oooh doesn’t he look his daddy” or “Oh my goodness, he’s a mini James (my husband)” and sometimes even “Wow, I can’t see any of you in him” .

People who’d met my other half, those who’d only briefly seen a picture of him, and even those who had no clue at all what my husband looked like – they all told me the same thing whenever they saw my son.

Hell, even my own family commented on him being his dad’s mini-me – and aren’t they meant to be biologically programmed to see their side in him?

I know it probably sounds silly but it did upset me a bit, especially the comments about there being nothing of me in him. More often that not though, it was just frustrating having to hear it over and over again. I’d carried and nurtured him for 9 months (I’ve still go the stretch marks and the mum-tum to show for it), surely there was something of me in there that people could pick up on?

I’d smile and nod politely, or say something like “yeah, I know” and move the conversation on.

But inside I’d be shouting, “Arrrggggghhhhhh!  Enough already. Would everyone please just  STOP SAYING THAT?”

To make it even more annoying, I didn’t get what all the fuss was about.  I was aware he didn’t really take after me, but I couldn’t see the mirror image of my husband in him that everyone else seemed to either. They’ve both got blonde hair, but other than that, I was at a loss.

But children change, by god they change, and this toddler of mine looks completely different to the baby of a year ago. He still looks nothing like me but the personality and mannerisms he’s developed are all mine. And I want to shout out “see, look, I did contribute to this wonderful creature”.

Not that he’s necessarily got the best of my traits, mind you – he’s strong-willed, bossy, melodramatic when he has a strop, and loves performing to a crowd – but you can tell he’s definitely mine! And I love it when people tell me we’re alike, even if they are effectively saying I’m a bossy, stroppy, showoff!

Like this? Read more of Claire’s brilliant Motherload blogs here

Claire is a radio journalist who’s worked on some of the biggest commercial radio stations and brands in the country. She lives by the sea with her husband and crazy toddler.