Spiderwoman: Why Lady Hale Is Our New Superhero
Is Your Family Holiday Worth a Criminal Record? 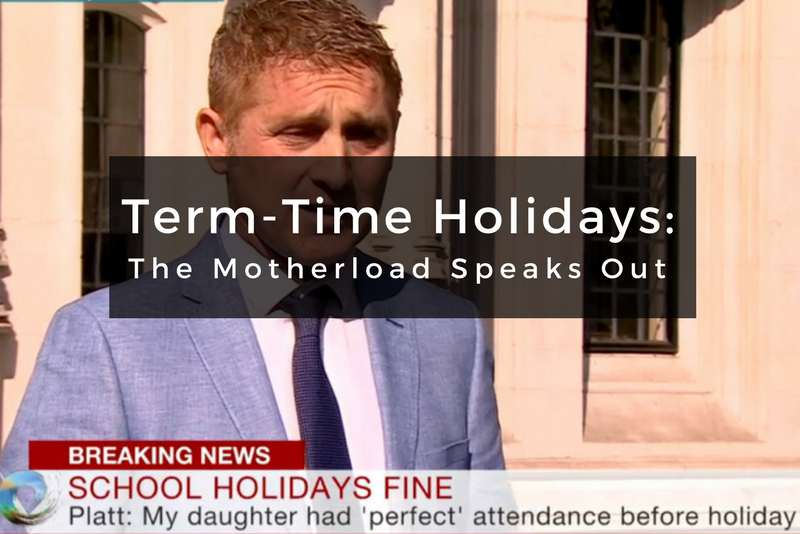 After Jon Platt lost his battle with the courts over the fixed penalty notice he was issued with for taking his daughter to Disney World Florida during term-time, we sought our members’ opinions on whether they felt that the Supreme Court had made the right decision, or whether they agreed with Jon Platt’s warning that the State was restricting a parent’s ‘right to parent’. We asked MOLOs in The Motherload® Facebook group who they agreed with; The Supreme Court, or Jon Platt?

Comments came in thick and fast:

“On balance (and selfishly) I agree with Jon Platt – and on the odd occasion we’ve taken the kids out of school it’s been for holidays where we’ve made sure they learn about culture and history so I genuinely believe they’re learning more (including important life skills) than if they were at school (especially considering it’s normally the last few days of term when all they seem to do is watch films!). Also the overall attendance of the child is important. If they were out regularly then that is a whole different issue. However I do recognise that schools simply can’t operate well with half the kids out of class. I also think it’s important to consider the stage your child is at. For instance I wouldn’t take mine out in GCSE year.  Not really as cut and dried as it seems!”  offered Libby Kearsley.

Laura Lou explained the difficulty of balancing work and extended family: “My partner has set holidays for his company only two weeks are for holiday time which is August. My children don’t like heat so it’s out of the question. My ex partner gets 50% of half terms meaning we have booked to go Wednesday to Wednesday in the may half term meaning my daughter losing three days school She has good attendance. Holiday hasn’t cost much less. Can’t see the problem. Sometimes it isn’t about money, it’s about families and their working hours.”

“I think as a parent it should be your choice – holidays with family are important and the current costs are ridiculously prohibitive” said Priya Nagda-Swainson.

Rosie May called for changes to be made to the school year: “I think the summer holidays should be reduced to 4 weeks which would make life easier for working parents, and the extra two weeks should be able to be taken whenever the parents would like (exams etc permitting)”

Corryne Pienaar explained how difficult it was to see extended family who live abroad, “My husband is from South Africa and we are very close his family so we try and go at least once a year. Confined to taking holiday to visit them during school holiday is the difference of £1000-£2000 just for the flights! So yeah if they fine us it still pales in significance to what we save flying there and back during term time instead.”

Kate Bell was adamant that it wouldn’t affect her decision to book a holiday in term time, “I will take E out every June! They can fine me, but it’ll still be less than what I would have to pay if going in the school holidays. We couldn’t afford a week away in the school hols. A week’s holiday away with family, experiencing different food, languages & cultures is as beneficial (more beneficial even) than a week in school. I feel VERY strongly about this.”

Erin Piazza felt that parents were over-entitled to expect a holiday, “I don’t know when it became essential for people to have holidays, abroad or otherwise. As kids, some years we didn’t get to go away as our parents couldn’t afford it. We did day trips and made amazing memories. When I worked as a full time teacher I was only able to have holidays during certain times, it’s a luxury not a necessity. Finally, why are people not badgering the holiday companies rather than the schools being in the firing line, again!”

Roksana Kaszyk called for fines for holiday companies that exploit parents, “Holiday companies hiking up prices during school holidays should be fined and that should be illegal. But I won’t be taking my daughter out of school out with the holiday period when she starts in August, unless under special circumstances.”

“No parent wants their child to miss school. They do it because they recognise that family time, exposure to different cultures, languages and countries etc is important too and because they couldn’t afford it otherwise. Why not impose this rule but then allow the schools to choose their own holiday periods so there is no heightened peak time for flights.” offered Donna Watkins.

Rachel Lawley wants to turn back time: “I think it should go back to the old system where you were allowed to take your child/children out for a total of 10 days. But that said you chose to send your child/children to school and therefore are in a contract that states certain fines. I’m not for the fines but if you send your children to school instead of say home schooling then this is what you sign up for (as stupid as it is). The holiday companies need to sort their prices out!”

Muni Osman felt that discretion for good attendance and achievement should be exercised, “If the child’s attendance is high and is on track, I don’t see an issue. No parent want their child falling behind and also children do not only learn in the classrooms. I personally feel that the parents judgements should be trusted. Some families just can’t afford to travel during school holidays so why should they be penalised for it?”

“My kids, I birthed them, I raise them, I’ll take them on holiday if I damn well please. It isn’t the state’s, school’s or anyone else’s job to manage mine or my children’s lives and a holiday in my opinion is enriching and educational. There is a learning opportunity in everything! I wish I could home educate to be honest.” said Laura Adair

Anneliese Rose Beeson praised the independent school system approach: “Thank goodness my kids go to Steiner! They get an extra 4 weeks off and no ridiculous rules on extra time off! Asking as a child has regular attendance I do not see the issue!”

Karima El Hajoui pointed out that the consequences were far reaching, “I think some people don’t realise the impact of this ruling. It’s not the holiday thing that’s a major issue (although it is a problem). This ruling allows the schools to fine/ and press charges if they feel that your reason for keeping a child off school does not satisfy their opinion. That means forcing your child to school even if you don’t feel they will be able to cope that day for one reason or another.”

Joanne Austin-Olsen felt that teachers and schools were being unfairly targeted, “I think it’s sad that schools and teachers get the brunt of parents’ frustration on this issue. They are just trying to do the best for the kids in their professional care. Nobody takes the airlines and holiday companies to account. They should justify the massive price hikes which are causing children to miss learning when parents take them out during term time.”

“I think, barring serious welfare issues, it’s not up to the government to decide how any parent raises their child.” Amanda Hogarth passionately said.

Gemma Bailey said, “My main issue with this judgment is that it discriminates against lower income families. There’s an income/wealth level above which you wouldn’t think anything of paying sixty quid to take your child out of school, so actually this judgment only affects families below that level, which is unfair.”

Michele de Paola felt this was a policy that discriminated against those who can’t afford private education: “So if you are wealthy and send your children to private school then you can take your children out of school whenever they like to on holiday therefore the wealthy people can get the low cost holidays! However the people who can’t afford private school and certainly can’t afford the inflated holiday prices get fined if they take their children out of school! Hmm wonder what type of school the children of the judge and the people making these decisions go to?!”

“I work in a school so won’t be taking mine out during term time but I struggle with the concept of parental rights to make that decision being lost.” added Dorcas Franklin-Bray

Jamie Francis felt that schools and parents were being pitted against each other: “Some people (like my husband and I) doing the jobs that we do, means that we can’t request holiday- it’s allocated to us. So, sometimes this will be outside of the school holidays and I don’t feel we should miss out on family time just because of that…I value school, I really do. But this just pits parents and schools against one another rather than working together.”

What do you think? Let us know in the comments section below!

Love this? Share it! You can read Kate’s last blog about Jon Platt versus The Supreme Court and for the latest from The Motherload®, pop over to our homepage

Founder of The Motherload®. Wife, mum to two girls, two cats and shit loads of washing in baskets that sit around the house waiting to be ironed. It never happens. Hater of exercise, denier of weight gain, lover of wine. Feminist. You can follow me on Twitter