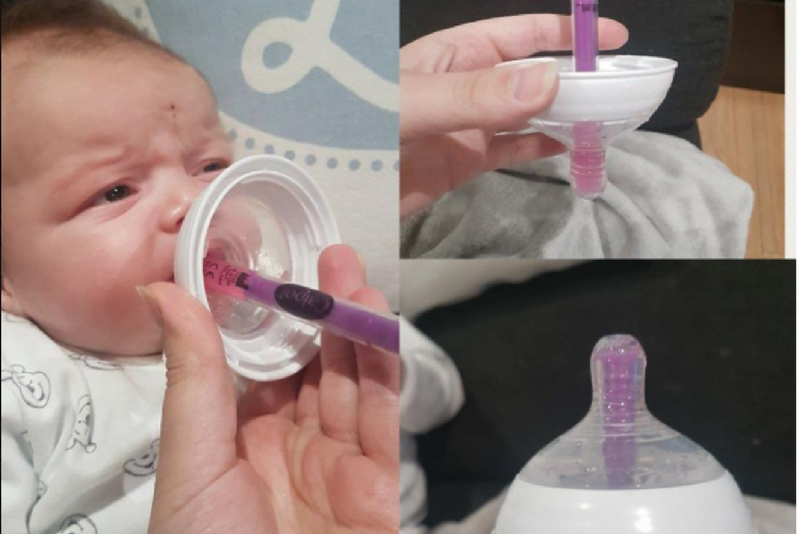 After having his 8 week vaccinations, little Alfie Lee was feeling a bit under the weather. His mum, and newly minted MOLO, Helena, kept a close eye on her little chap. But when his temperature started to rise, she decided it was time to give Alfie some Calpol to bring it back down, and make him a bit more comfortable.

As a mum of two – her eldest son is four and a half – Helena was no stranger to the tricks of the mum trade when persuading a little one to take their medicine, but on this occasion, all of her tried and tested ideas failed. “He wasn’t even taking half of the dose”, Helena explained to The Motherload®. “His temperature was soaring – I tried all the other tricks I had tried for my eldest son, but whatever way I tried to do it, he just gagged and spat it out!”

Knowing that he was feeling increasingly uncomfortable and concerned about his spiking temperature, Helena glanced at the milk bottle next to them and had a brainwave. “I was on my last straw with how to get him to take it, and I was thinking he needed to suck the syringe but he didn’t seem to get the idea. His bottle was sitting next to me and i remember seeing a very similar idea on Facebook a few weeks previously, for something else, so I thought I’d try it.  When it worked and he took the whole dose I then decided to post it on my timeline to help any other mummy friends – I realised i cant be the only one struggling!”

Helena’s idea was simple but very effective. She loaded up the Calpol syringe that comes free with the medicine, and put that inside the bottle teat. She then gently placed the teat into Alfie’s mouth, so that he could suck the Calpol as he would his milk, and voila, he took the whole dose! Helena was over the moon it had worked so well and vowed to share it with her friends.

With over 63,000 shares and 22,000 likes and 29,000 comments on Facebook, it’s safe to say Helena’s ‘mum-hack’ has gone viral, giving much relief to many mums facing a similar predicament with their babies. “I never in a million years thought it would go as mad as it has! I’m completely gobsmacked by the whole thing.”

Fortunately Alfie is now feeling a lot perkier, thanks to his mum’s quick thinking.

If you love this mum-hack as much as we do, pass it on by sharing with another mum now below!