The Truth About: Multi-Tasking 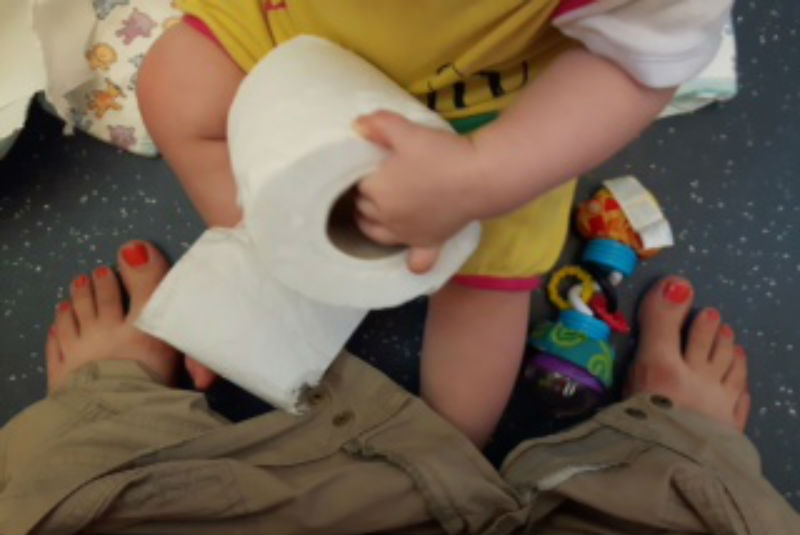 Being a mother is all about multi-tasking…

My daughter is splashing in the bath when she looks up at me and laughs, “Ha ha Mummy, you’ve got a moustache!”

She has a point; this is precisely the problem I am attempting to eradicate. She is referring quite literally to the smear of white paste tingling away on my top lip rather than the few dark hairs underneath that I am hoping will be bleached into oblivion. I might treat myself and floss my teeth while the Jolen is working its magic or crack open the Ped-egg.

I have realised that bath-time can be used productively for my own personal gain; a little bit of me-time can be squeezed in while simultaneously getting the kids clean as part of their bedtime routine. It is a desperate woman who must stoop to this level of basic personal maintenance but when your time is swallowed up by hungry children demanding food and attention, precious little remains and so mastering the art of multi-tasking is your only hope.

Is it fair to say that women are better at multi-tasking than men? It’s a lazy gender stereotype but let’s trot it out all the same as I’m guessing you’re thinking of your other half and nodding. Ever since having my first baby, I haven’t been able to drift into that deep slumber where you fail to be stirred by the sound of the slightest cough or cry.

I can’t switch off and do just one thing; even when I’m asleep I am multi-tasking. He, on the other hand, can snore through an entire episode from the wailing that signals a nightmare to the padding of little feet down the corridor to the small person climbing into bed and wriggling for the rest of the night.

My husband’s idea of multi-tasking is sitting on the toilet for a good ten minutes uninterrupted while surfing on his smartphone. My recent experiences in that small room are staggeringly different.

Like the time I was bursting for a wee while breastfeeding so had to stand up with the baby still latched on, taking care not to lose a nipple with any sudden movements then make my way to the loo, undo my trousers single-handedly and sit down. A tried and tested move followed which involves pulling the paper towards yourself from the holder on the wall then lowering your chin onto the top of the roll to anchor it in place and allow a sheet to be ripped off.

On this occasion I didn’t even get to use the piece of paper because my other child had walked in, plonked herself on the potty to do a poo and was bent over with her bottom in my face demanding to be wiped.

This example of motherly multi-tasking in the privacy of my own home pales into insignificance when compared to the heroic efforts of one MOLO.

When I asked members of The Motherload® to share their stories of extreme multi-tasking, she came forward with this gem of a scenario: “I was once pumping breast-milk on both sides at the same time, in the car whilst stuck in traffic, when a police car pulled up next to me. The poor lads were so shocked they decided to look away.” If I had two hands free I would give you a high ten but a high five will have to do.

Another mum was in the supermarket with her 4-month old, paying for her shopping at the self-service till, which is a frustrating process on the best of days let alone when your baby is crying in the trolley. She was calmly trying to scan, pack and comfort simultaneously when a fellow customer decided to initiate a discussion on the various reasons he thought the child might be sobbing.

As a mother, she knew perfectly well from the pitch of her daughter’s cry, it was a combination of teething, temper and being over-tired but the complete stranger was convinced it was wind. As if she didn’t already have enough to do in that moment without having to take advice from a stranger.

There is a myriad of roles that a mum must manage at any one time – washing to fold, packed lunches to make, bills to pay and fancy dress costumes to fashion out of thin air at short notice – and yet you still must not forget the jobs to be done on behalf of imaginary, magical creatures: “Major parenting fail! Mummy, the tooth fairy didn’t come, my tooth is still under my pillow.”

I am thinking of entering a circus troupe into Britain’s Got Talent. Who’s with me? With our skill-set we can stick on some sequins and we’ll pick up the tricks in no time. We can be jugglers and plate-spinners, a one-woman band and maybe even a lion tamer. We could call ourselves M.W.M.T. (Mothers Who Multi Task) and in the centre of the stage, as an artistic statement, there would be a toilet with a woman sitting on it, trying to go for a wee while breastfeeding a baby and wiping a toddler’s bottom.