The Truth About: Playgroups 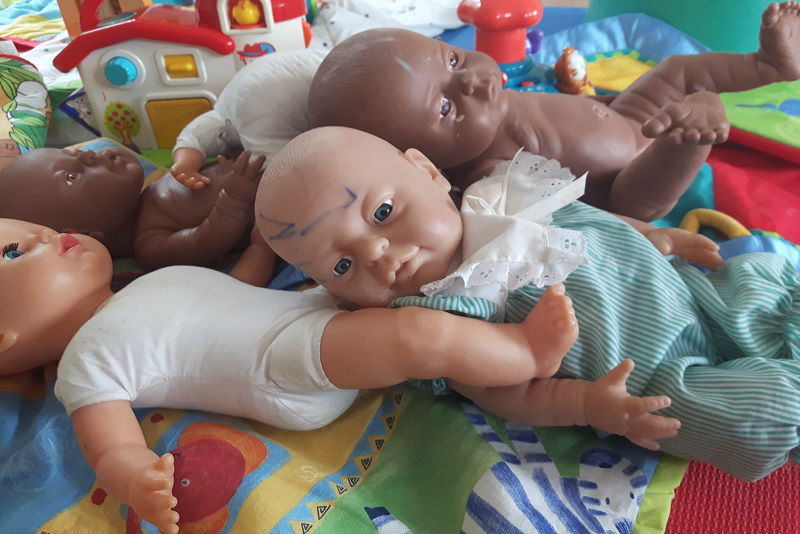 I can remember the first playgroup I went to, or almost went to. I had a random weekday off work while I was pregnant and thought I would venture to the local community centre to proudly pat my bump, chat to friendly mums and play with their adorable offspring.

I pushed open the front door and stepped inside but a stair-gate was blocking the corridor. Beyond that barrier was another world that I wasn’t quite ready for. I couldn’t even see the chaos created by twenty toddlers let loose on a room full of toys but I could hear it; the crying and whining, the squealing and shouting. Not so much the pitter patter of tiny feet as the deafening stampede of a herd of very small wild animals. I bottled it and walked home.

Four years and two children later, I am now used to the cacophony. I can hear myself think despite the din and hold a conversation amongst the racket. You are hard-wired to pick out the particular frequency of your own child’s cry so you know when to stop mid-sentence and seek them out.

I once thought playgroups would drive me mad; I didn’t realise they could save my sanity.

Granted they can be hit and miss, and you do have to try a few to find the right fit for you and your child, the atmosphere where you can feel at home. The best bit though is that you are not at home; you have actually succeeded in getting yourself and a small person out of the house to drink a cup of tea somewhere other than your own sofa where there are other grown-ups to talk to and possibly even free biscuits.

As they get older, the not-being-in-your-own-house bit is even better because any messy play involving sand, paint, play-dough, glitter and glue is nowhere near your own carpet.

Playgroups are pretty much the same wherever you go and there is something comforting about that. There will be a dressing up box and a child wandering round in an eclectic ensemble involving a princess dress and a fireman’s helmet. There will be a home corner where, stamping on stereotypes, you will often find the little boys merrily doing the ironing or pushing the hoover round.

There will be a squabble with a mum on bended knee giving a lecture on sharing while two children play tug-of-war with a toy; usually a pram or a Cozy Coupe car.  There will be a scary-looking pile of half-naked plastic dolls with matted hair and felt-tip on their faces. When it comes to tidy-up time, you will pick up a rubber giraffe and, failing to find the crate marked “Zoo Animals”, drop it in with the farmyard set and hope no-one notices the odd one out.

Along with the noise, you have to get used to the occasional smell. There will always be one child circling who needs a nappy change. Parents will wrinkle their noses as they catch a whiff and wonder if the stinky so-and-so belongs to them. This is when you do something you promised yourself you would never do in public; scoop up your son or daughter and sniff their bottom.

I have always found it reassuring to turn up at a playgroup and find there is someone else having a worse day or surviving on less sleep and no-one has bothered to look their best. I have never walked into a room of catwalk models who have lost all their baby weight, wearing pristine outfits with full make-up and perfect hair. I often think if I was to bump into the mums I see at playgroup all dolled up for a night out or looking smart and professional in their workplace, I probably wouldn’t recognise them.

The reality is we have our hair scraped back and our scruffs on; we are wearing jeans and not our best pair because they don’t fit yet and what’s the point when you’re going to be crawling round on all fours? Stick on a long top though, I am not exaggerating when I say every week I get an awkward glimpse of another mum’s builder’s bum.

I asked members of the Motherload to share their experiences of playgroups and the response was interesting; some heart-warming memories and some eye-opening moments. It made me realise how lucky I have been to find good groups where I live which obviously isn’t something you can take for granted.

We heard plenty of positive tales from those who moved to a new area and found a good network of friends through going to playgroups. Perhaps like me though, you see the same women every week and have a good chat about everything from sleep deprivation to the cost of childcare then realise you have completely forgotten their names? Somehow though you do always remember that they are Archie or Poppy’s mum. My cheat is to scan the sign-in sheet to do a spot of revision.

It seems sadly to be the bad attitudes of other mothers that can spoil and sour the playgroup experience for us and in particular when women are bitchy, cliquey, competitive or judgmental.

One MOLO says she was shunned and left feeling like a slummy mummy after giving her son tea in his bottle instead of the organic juice provided. Another mum told us:  “I was questioned as to why my son wasn’t talking. When I told her he was autistic, she quickly removed her child from our presence.

Another one said it meant he would be a little terror to which I politely smiled and told her that my love will rub off on my son and I hoped her ignorance didn’t rub off on hers. I did however continue to go to that playgroup as you can’t let one arrogant old witch ruin the experience.” Well done you for sticking it to them and standing up for your brilliant boy.

Going to church isn’t usually my cup of tea and I don’t plan to have my daughters christened so perhaps it’s a tad hypocritical but I gladly step across the threshold when there’s a playgroup and the kettle’s on. There is something very welcoming about a smiling, twinkly-eyed granny wielding an industrial-size teapot and proffering cake.

Another MOLO shared this touching memory: “I used to go to a playgroup that was held in a church and run by the loveliest lady. She took the time to say hello to every mum and it wasn’t a small group by any means. Every week she would gently take your hand and clasp it between hers and say ‘thank you for coming’ and that small gesture was the biggest cuddle. She had a profound effect on me.”

It’s not just the retired or the religious who kindly volunteer though, often playgroups are kept afloat by a dedicated group of parents who have had their arms twisted to help out or those who step in when a service is about to be shut down. You have to feel a sense of gratitude to these grafters for taking on the task when it’s never going to be a money-spinner. Several MOLOs deserve a pat on the back (and a large glass of wine) for coming to the rescue of their local playgroups.

Two of our mums run a group where they nurture a home-from-home big playdate vibe, everyone mucks in and the parents get bacon sarnies. One husband is no longer allowed to help out though after bringing a little taste of the Karma Sutra to the story corner: “My other half sometimes comes along when he’s not on shift but I banned him from setting up the teddies after finding he had placed them all in compromising positions with each other!”

My favourite ever playgroup is sadly now 150 miles away, so just a bit too far to get to on a Friday morning. I had enough trouble getting there on time when I lived walking distance from the church and used to cross my fingers we would still get in when I turned the corner to see a long queue of mums with buggies already snaking down the pavement.

One of my closest friends says this playgroup was a lifesaver. Feeling somewhat lonely and overwhelmed after a horrendous birth, she looked around one day and saw loads of other women in the same boat and suddenly realised having a baby and being a mum was something she could really enjoy.

Playgroups are rather like children; they are noisy and messy but they are great fun and definitely worth the effort. And did I mention free biscuits?