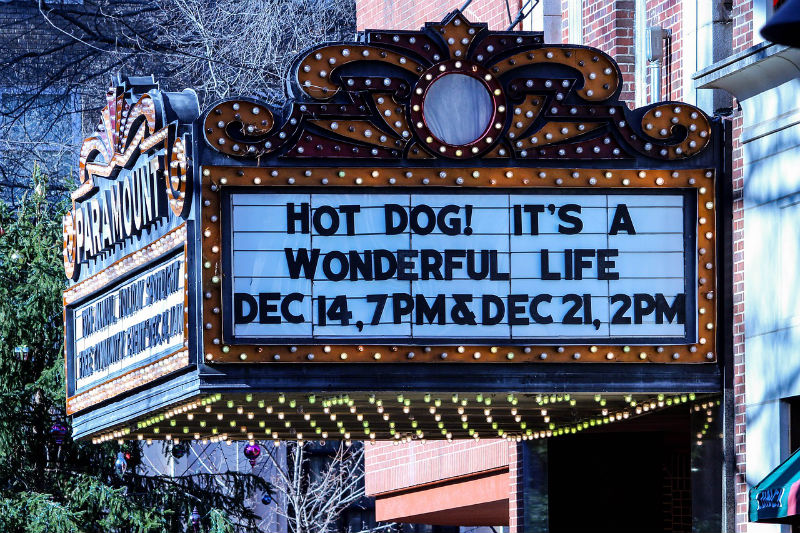 Ask anyone what their favourite Christmas film is and they might say Elf or Miracle on 34th Street. Something whimsical and full of family fun. (And if they say ‘It’s A Wonderful Life’, they’re lying. Nobody reeeeally likes that).

Sometimes though, people’s best-loved Christmas films are one or two of the following – a Christmas film that isn’t actually that Christmassy. Sure, they’ve got twinkly lights and whimsical music, but when it comes down to it, people like their festive entertainment riddled with infidelity, extreme violence, creepy monsters, international terrorism, and Jamie Leigh Curtis’s boobs.

Allow me to demonstrate.

Love Actually is actually one of the most ridiculous films ever made, but it is so light-hearted and charming people largely ignore the full insanity of the various subplots. It’s also one of those irritating ensemble cast movies where we’re supposed to care about everyone despite being continually distracted by what else they’ve been in.

“Look! It’s Jojen Reed from Game of Thrones! He was such a cute little boy!”

“Ah! I love Martin Freeman in Sherlock! I won’t look at Doctor Watson in the same way again now I’ve seen him bending over that girl from Gavin and Stacey.”

The most un-Christmassy thing about Love Actually, is the fact that the behaviour of most of the characters veers from the slightly questionable to the morally reprehensible. Alan Rickman cheats on Emma Thompson with the girl in the skirt from his office, Andrew Lincoln (despite looking adorable in his pre-Walking Dead, less grizzled state) has an inappropriate obsession with his best friend’s wife and puts her in the horribly awkward position of telling her with the cue-card stunt which she inexplicably loves, and Billy Bob Thornton does a staggeringly accurate portrayal of a US president who likes to touch up women bringing him tea.

The film saves itself by being deliciously heartwarming despite all of this, helped mostly by delightful singing children and the thought of what life would be like if Hugh Grant was actually Prime Minister rather than the shower of shit we’re stuck with now.

Ah, Home Alone. Along with Honey, I Shrunk The Kids, few films make me feel so nostalgic for the end of term at school where you’d get to watch a ‘video’ in class (I know, right?) instead of having a lesson. In truth though, a more inappropriate film for children would be hard to find.

Adorable as Kevin McCallister is, he is mercilessly bullied by his numerous siblings/cousins/whoever the hell else all those kids are, to the point where you’d have some serious concerns for his emotional wellbeing, and then he is (obvs.) abandoned by his neglectful parents who can’t keep count of how many children they have. Easily done, I’m sure, at least for the tenuous set-up of another ridiculously plotted movie that everybody loves anyway. From the creepy old man who keeps staring at him to the world’s most inept pair of burglars, a lone child under threat is just HILARIOUS at any time of year, but especially at Christmas.

And then there’s the certain-death-in-real-life ultra-violence which only serves to show kids that taking a plummeting iron to the face or a blowtorch to the scalp does about as much damage as Road Runner dropping an anvil on Wile E Coyote. But hey, Kevin has done the cute stinging aftershave scream and made the cardboard cut-outs dance around, so this is fun right? And, look, the creepy old man saves the day after all and has in fact been neglected by his own family so, aaaahhh. Sentiment overdoses all round.

Actually, the most unbelievable part of this film is how they managed to edit out all the times Joe Pesci must have inadvertently said “f*ck” whenever he opened his mouth.

It may not surprise you to learn that the director of Home Alone, Chris Columbus, had a bit of previous for family un-friendly Christmas movies, as he wrote the 1984 festive horror film Gremlins. (He also went on to direct the first two Harry Potter films so he had learned to tone it down a notch or two by then). If you’re not familiar with Gremlins, you should be, as it is hilarious and gross and extremely creepy, oh, and set at Christmas, naturally.

You must know the rules of Gremlins: don’t get them wet, don’t expose them to bright light, and NEVER feed them after midnight. Of course the whole thing goes to shit and we’re treated to the wonderful Christmassy story of horrible little monsters terrorising a town, including one of them getting pulped in a blender and another one exploding in a microwave. ‘Tis the season to be jolly and all that.

Taking place over Christmas and New Year, the plot of Trading Places sounds as if it would be unbelievably tedious – comedy about commodities brokering anyone? *yawn* – but it is genuinely a lovely satisfying film where the bad guys get their comeuppance, which is after all the true spirit of Christmas isn’t it?

You’d be forgiven for thinking that themes including petty theft, drug use, attempted suicide, prostitution, and stock market espionage don’t sound very Christmassy, and they’re not really, but there’s a man in a gorilla suit which counteracts all the grim stuff rather nicely. The film shows a once proud man brought to the depths of despair on the whim of two rich brothers with nothing better to do, Jamie Leigh Curtis flashes a bit of boob while looking after him to show everyone she has loose inhibitions but ultimately a heart of gold, and Eddie Murphy does his Eddie Murphy bit throughout.

If you thought you would never give two shits about crop reports and the price of shares in frozen concentrated orange juice, think again.

The second of my five movie choices to feature Alan Rickman being a magnificent bastard, Die Hard is a bona fide classic. A ludicrous team of European ‘terrorists’ with names like Fritz and Heinrich who have the sole aim of knocking off a massive vault of cash, Bruce Willis in a vest, and a shedload of collateral damage to Nakatomi Plaza – NOW it feels like Christmas.

Die Hard is patently ridiculous, from John McClane’s one-liners and no shoes, to the old cop who accidentally shot a kid and hasn’t fired his gun since until just right when he does it with no problem at the end, to the quite delightful nostalgia of insane blokes taking a bunch of hostages for the entirely unpolitical motive of just to steal some money. And it’s awesome.

Get comfy, get some nibbles and a glass of something nice, and enjoy two hours of classic late 80s action at its most festive.

When she’s not in the office or busy doing ‘other stuff’, you can probably find her in soft play with a toddler and an excitable 6-year-old.