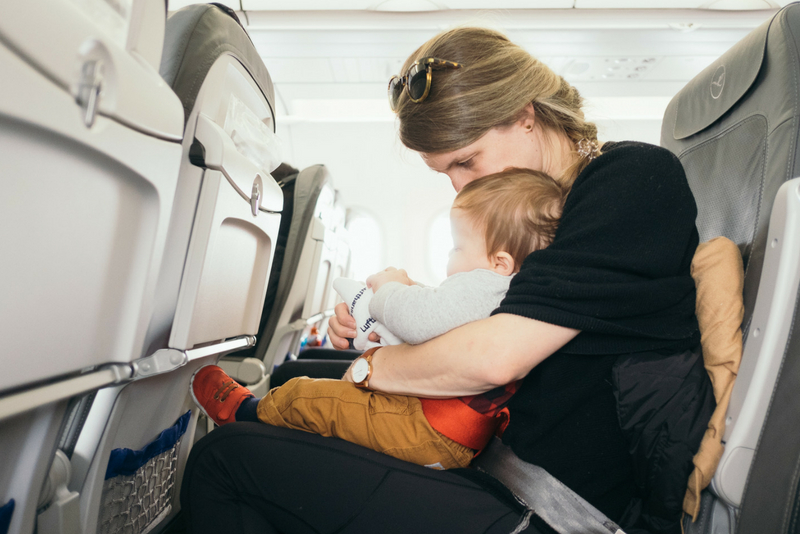 We’ve just returned from our first holiday as a family of four. Two weeks of sun, sea, early starts and tantrums in 30c+ Greek heat.

When it came to the journey home we were hoping for a smooth ride so we could crack on with the resulting 11 loads of washing. Unfortunately, a congested route and French strikes conspired against us and we ended up with a three hour delay, two of which were spent sitting on the tarmac. If I’d been travelling alone I’d have welcomed an extra couple of hours to myself to read a book in peace but with an 8-month-old and a 2-year-old I knew this would be an extreme test of tolerance and my ability to channel the spirit of a CBeebies presenter.

The toddler did remarkably well considering. He was playing with anything in reach – the tray, arm rests, the seatbelt – and was keen to run about but we contained him. There was some mild grumbling but certainly nowhere near DEFCON 10. The baby was overtired and began crying. I was obviously conscious of the other passengers and did my best to get him to nod off. I rocked and shushed like never before and after what seemed like an age but was probably about ten minutes he did give in and then slept for pretty much the entire flight.

At some point before the crying started there was a commotion at the front of the plane as it seemed we were potentially over-loaded and the six final passengers were asked to consider not boarding. They refused and after a headcount the crew decided we could take off. Well, as soon as we had a runway slot.

One of the final six decided to recount the tale and her horror at the delay during a phone call. She had one of those loud whiny voices you can’t help but tune into and as the engines weren’t on people could clearly hear her side of the conversation. She said:

‘to make it ten times worse there are two crying babies on board.’

Clearly I accept that nobody wants to listen to a crying baby and of course I was well aware of that while mine was wailing which is why I had a sweat on, my heart was racing and I felt pressured to get him to sleep as quick as I could. I’m not an idiot. I knew people would be thinking ‘hurry up and shut that baby up’ but most people are polite enough to not actually say something out loud because they know it’s not going to help and is actually pretty twattish behaviour.

It made me self-conscious for the entire time we were on the plane. It wasn’t as if I could respond because it wasn’t said directly to me. So that got me thinking. How would I have reacted if this girl came up to my seat on a packed plane as I was cradling a distressed baby and said: ‘your crying baby is making my experience ten times worse.’

In all honesty I probably would’ve burst into tears as being tired and stressed tends to have that result, but I’d like to think I’d have been able to articulate something along these lines:

“You think your experience is 10 times worse? I’m holding this very upset baby who has no other way of communicating his distress, unlike the adults on this plane who can have a bitch about the situation, and am desperately trying to help him sleep because I don’t like listening to him being so upset so am acutely aware others don’t either. I haven’t spent the past two weeks lounging about on the beach, dozing at will and drinking until dawn so am not feeling the most rested. My bladder is being tested to the limit as I can’t go to the loo because that would mean leaving the baby to get more distressed. I have a headache. My arm is dead from rocking this baby and the crying is going to continue for me long after this plane lands. Having some entitled 20-something tell me my crying baby is making her experience worse really takes the piss because I’m not exactly on a Barbados beach right now. And you’re on a flight from a popular family holiday destination so chances were there was going to be a crying baby at some point, because, news flash, babies cry.”

Then passengers would clap and the crew would shower me with free G&T.

But I doubt it would’ve happened like that because you’d have to be a very mean type of person to approach a mother in that situation and say such a thing. So why is it okay to say it within earshot? I get that she was probably going for an easy laugh from her mate but it was pretty obvious other people would hear. And if you wouldn’t say such a thing to someone directly then don’t say it so they can hear. This also applies to writing things from the safety of your keyboard. It makes you a selfish coward. Just seethe quietly in your head but don’t be a dick.