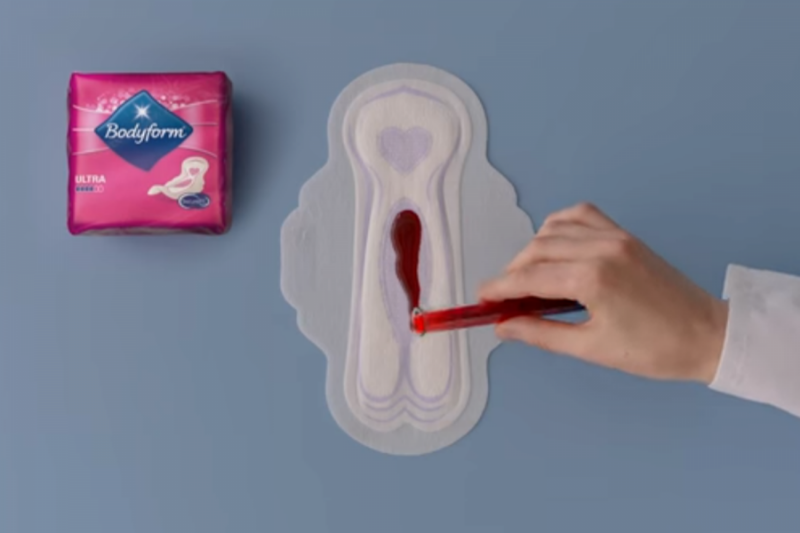 I never imagined that a sanitary towel manufacturer could make my dreams come true, but it looks like Bodyform has done precisely that.

The company, whose reliable pants-mattresses were a stalwart of my teenage years, has announced that it is ditching the stupid blue liquid from its adverts and will use something which – wait for it – actually looks like menstrual blood. Fannytastic news!

I’ve lost count of the number of times I’ve banged on about this – what is it with the stupid blue liquid? Why can’t they just pour a can of cherry pie filling onto the damned pad instead? Something which actually looks like a period? If you’re selling a product to a woman, who bleeds out of her vagina once a month, for the sole purpose of offering something to soak up that blood, why be coy?

Why is everyone so scared of periods?

Is it because men are scared of periods? Perhaps. Is it because men who are scared of periods run the big companies which sell these luxurious feminine products, and other men who are scared of periods take care of the advertising budgets, and the TV channels and the magazines which are expected to print or broadcast these adverts? Maybe. Thus far, most of these companies which sell sanitary pads and tampons appear to find menstrual blood so horrifying that they pretended it was blue juice, which was poured from a glass jug in a scientific laboratory by someone wearing a white coat to avoid the horrifying fact that they were selling a product which was designed to catch blood which was coming out of someone’s vag.

I think Bodyform decided that pouring actual period blood in a product demonstration might be a bit grim (plus they would probably have had to use a Mooncup to catch the clots and they don’t really want to be promoting those) so they are using red liquid instead. The photo they’ve put out shows a fairly modest, but bright red stain on the sanitary towel.  I’d say it’s more ‘pants up for a minute on day one’ than ‘full-on day two gush, an hour in’ but you know, baby steps.  You’ll be thrilled to know that in the video, the red liquid is still genteelly administered from a nice, sterile test-tube by an anonymous, white-coated science professional rather than being fired out by some sort of hairy muff-puppet (a girl can dream, right?)

Their advert also features a bloke buying sanny pads from the corner shop, a woman floating in a (blue) pool on a giant inflatable lilo-cum-panty-pad (which actually looks about the same size as the ones I wore in the 1980s), the oh-so familiar sight of tiny blood rivers running down a woman’s legs in the shower, and the slightly less familiar sight of someone bouncing around joyfully while dressed up as a sanitary pad. Although, Hallowe’en is coming soon, and I may recreate this. Then there is a close-up of a gigantic blood splash before the words ‘periods are normal, showing them should be too’ and then the strapline ‘Live Fearless #bloodnormal’.

I applaud Bodyform for doing what no one else has dared to, for being honest enough to acknowledge that 50% of the entire population spend around 20% of their life between puberty and menopause on the blob. Bleeding. Not pouring blue liquid from a glass jug.  Nobody likes periods (and I don’t need to run a survey to know that, they really are fucking rubbish) but that doesn’t mean we have to deny their existence, or do the advertising equivalent of being locked in a hut for the week.

Bodyform’s new ad shows we’ve come a long way from being made to feel inferior because the women in the adverts were out rollerblading, in shorts, listening to Dr Albans on a Sony Discman while they were on their period and yet we were hunched on the sofa at home with a hot water bottle and half a tonne of Galaxy. But maybe for their next campaign, Bodyform could be even more truthful, and show the woman in the shower silently loathing her boyfriend even though he’s being so brave, going to the shops to buy fanny pads for her, or they could show the fancy dress sanitary towel woman crying at home because she couldn’t face going to the party because her hormones were making her feel socially anxious, even though she had a really cool costume.

But do you know what? They’ve ditched the stupid blue liquid, and that’s a bloody good start.

Like this? Share it and spread the MOLO love! You can read Alison’s brilliant blog Why I’ll Never Regret Trying for a VBAC and for the latest from The Motherload® head to our homepage