Why Piers Morgan Is Wrong About Babywearing Dads 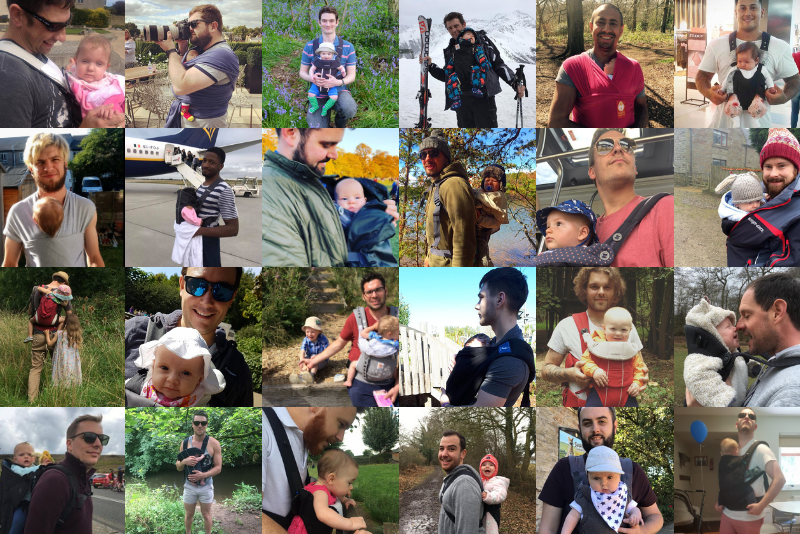 Piers Morgan. Love him or hate him, he’s the Katie Hopkins of the morning TV world. Never short of opinions that divide people. I actually quite like him, I find him more of an Alan Partridge-type, a bumbling idiot than malicious.

Piers caused controversy when it came to men and babywearing. Now his comments weren’t really around men being dads and looking after their kids, but more about the carriers themselves. He proclaimed he carried his three boys in his arms, it made women go wild and that baby carriers emasculated men. In fact he feels so strongly about it, he would cross the road to avoid a man wearing a papoose.

I’m pretty sure Piers carrying three children, was a quick trip to the corner shop for the Sunday papers and not a full family day out. I bet he didn’t carry them around the inaccessible London Underground, or for long walks on beaches. I also doubt he had the drama of a heavy double pushchair. Push one of those things for a day and slings feel like a modern day miracle. They’re practical and quick.

My husband loves to wear our babies, he even carried my daughter around in a carrier while she was on oxygen. She’d be on the front, oxygen tank on the back. I’m not sure this emasculated my husband in any way at all. In fact I think it made him look quite fetching and very manly.

I think Piers is wrong. In fact, I think women are much more likely to go wild for a man wearing a baby.

Any woman who lived through the eighties is likely to remember Spencer Rowell’s image, L’enfant. If you were a teen, the iconic black and white image of a man holding a baby more than likely adorned your bedroom wall. That poster sent hormones flying because there’s just something about a man with a baby that makes our ovaries twitch.

Now some would say that image would reiterate Piers’ point. Strong manly arms holding a tiny baby making us women go mushy, but, I disagree. I think it’s the way he’s looking at the baby tenderly that us ladies love.

Slings have the same effect. A man carrying his pride and joy in a sling makes us go all gooey. Slings are like a proclamation of the modern day Dad, showing all who see him that he’s equal to Mummy in the parenting world. It’s like a sticker that says ‘hands-on dad’ and we can’t get enough.

I mean that model in L’enfant blatantly wasn’t the dad of a newborn. No amount of photo-shopping would make a new Dad look so fresh-faced after those sleepless nights. I realise this now. But a sling can make even zombie-Daddy look sexy.

I’m not the only one who loves men wearing babies either, hundreds of mums on The Motherload® Facebook community agree with me and shared photos of their amazing babywearing men – you can see some of the photos of their partners on the image above. Do they look emasculated to you? 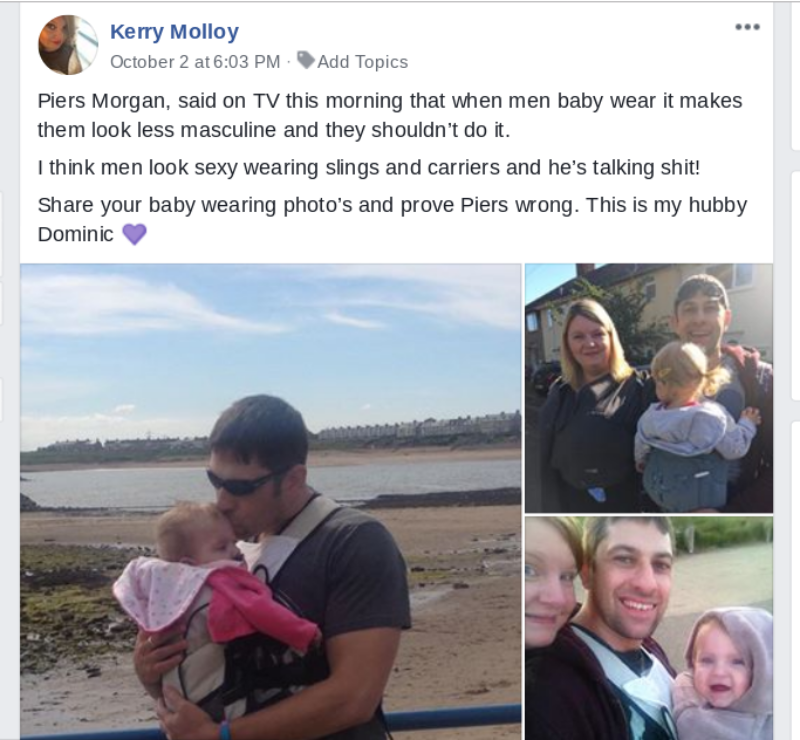 Click here to join The Motherload® and read Kerry’s thread

Evie agreed ‘Don’t understand why it’s not a masculine thing to have your baby close to you? It’s lovely bonding time for both parents! What a silly thing to say!’

Katie added ‘Men that babywear are FIT. Husband carried our daughter when she was small and does the same for our son’.

Whilst Ruth said says even fairy wings don’t emasculate her baby daddy ‘I flipping love seeing my huz ‘baby wearing’. He loves the whole sling thing and is always taking the little one out for adventures in it. He says that he feels most masculine when ‘dadding,’ esp if it includes wearing my daughters pink fairy wings backpack. I have to say I quite agree #realmen’

There was also a lot of questioning on whether Piers really should comment on masculinity too.

Sian said ‘Piers Morgan has proven time and time again that he doesn’t know what he’s talking about! What could be more masculine than a father bonding with his child…?!’

But I think I’ll end this with Theresa’s comment, that sums up why we shouldn’t let Piers put our men off babywearing.

Image credit: The Motherload® – thanks to all our members who shared their brilliant pictures of babywearing dads. You guys rock!