There is nothing quite like the humiliation and shame of being cheated on. Everyone knowing your partner didn’t love you or respect you enough to be honest. The feeling that everyone else knew before you did, that they were with someone else.

As if that wasn’t bad enough, it’s being told that “you’re mental” when you challenge their behaviour, because let’s face it, it’s easier to cast doubt on someone else’s mental health than it is to admit “I’m cheating.”

Rebecca Humphries’ tweet following the duplicity of her long term partner Sean(n) Walsh with his Strictly Come Dancing partner Katya Jones is painfully triumphant. Rebecca is taking ownership of her story from the tabloids and she renounces her role as victim. And good on her for claiming the cat as well: 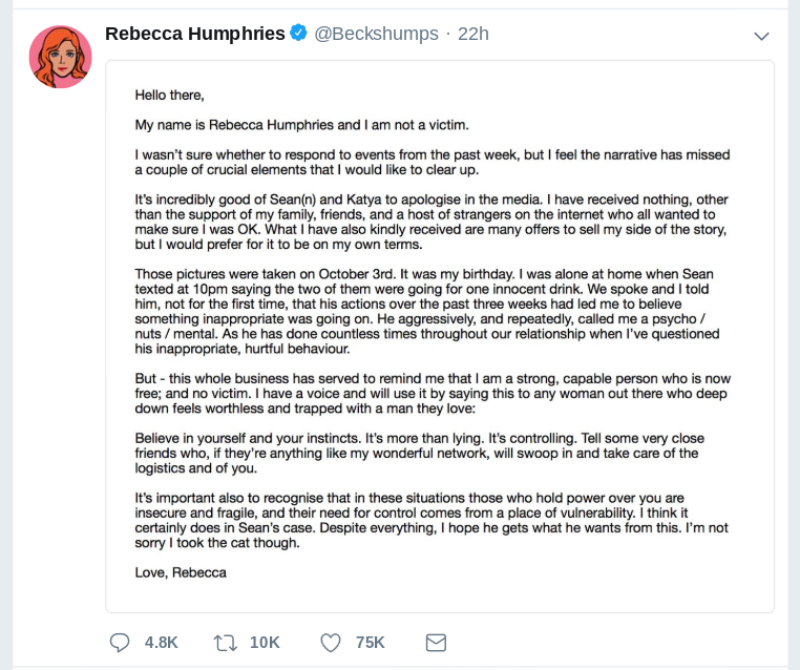 But there is also such sadness in her words.

“Those pictures were taken on October 3rd. It was my birthday. I was alone at home when Sean texted at 10pm saying the two of them were going for one innocent drink. We spoke and I told him, not for the first time, that his actions over the past three weeks had led me to believe something inappropriate was going on. He aggressively, and repeatedly, called me a psycho/nuts/mental. As he has done countless times throughout our relationship when I’ve questioned his inappropriate, hurtful behaviour.”

I too know the feeling of questioning your partner’s behaviour and being told you’re crazy and paranoid for suspecting them. In my case, I started to believe him. Maybe I was mad. There were no paparazzi photos of passionate kisses to confirm my suspicions – just a long stream of drunkenness and emotional absence, and tiny fragments of evidence that led me to believe that my then husband was having an affair with a young woman from work. The denials, which were contrary to my gut instinct, made me feel like I was losing my mind. Until the text message to someone else saying “I love you” was found. Then it was conclusive.

At that point, like Rebecca, I fled, and my support network rose up around me, somewhere to stay, somewhere safe to cry, somewhere to make sense of the strange new order of my life. To my surprise, when the shock subsided, a feeling of invincibility took over – I had survived what I thought was the worst thing that could happen and my instincts were right. I wasn’t crazy at all, I was vindicated and I felt powerful. I rebuilt my life, just me and my cat at first, later a new partner and then our children.

Rebecca says believe in yourself and trust your instincts. She is not a victim. She is a strong, capable person. She will get through this, with her cloak of invincibility and her cat, and so can you.

If you need support for escaping a controlling or abusive relationship, you can contact the National Domestic Violence Helpline

You can read Alison’s blog The Death of a Marriage: He Loves Me, He Loves Me Not here