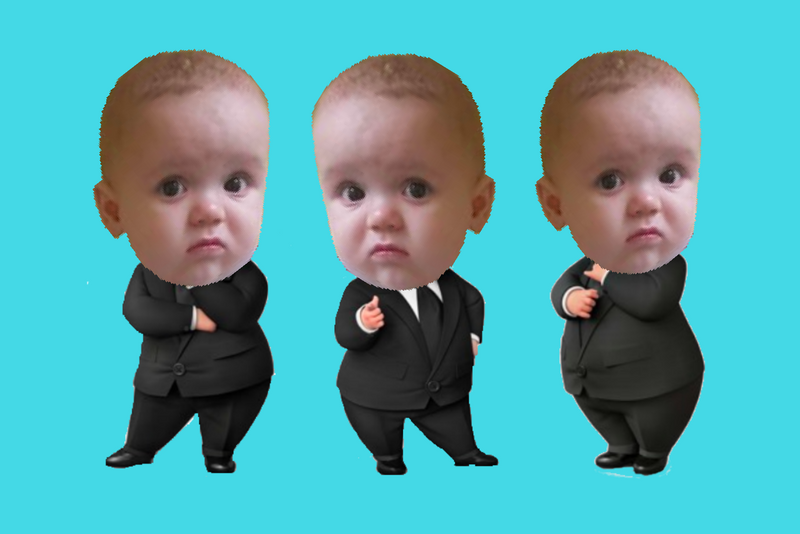 I’m currently in the middle of making my way back into work after my maternity leave. I thought this would be nice and simple; I’m freelance, so I could take it slowly and figure out how to make things work for both me and my son. After all, total flexibility is one of the great advantages of being your own boss.

Except I am not my own boss any more. My son is my boss, and he has his own ideas about how our days should go. And those ideas often involve hours spent knocking down stacking cups and no time spent writing.

But reporting into an eight month old isn’t an entirely unfamiliar experience. In fact, a lot of it is strangely reminiscent of my days in the corporate jungle. Let me explain why…

Ah, that old faithful tactic of bad bosses everywhere; telling you loudly to just GET SOMETHING DONE without any understanding of why the thing they want you to do is actually pretty impossible. They don’t want your reasons – because reasons are just excuses in their book – they just want what they want and they want it now.

This of course is a favourite on an eight month old. Sure, my son hasn’t quite mastered the English language yet, but this morning he’s demanded toast, no toast, my weetabix, not weetabix, water, not to have a wet vest (after spitting out his water), not to have his face wiped, to be allowed to eat the cat’s tail and to not be put on the floor. And that was all in the half hour that passed as breakfast.

It makes finding somewhere to store 500 footballs with literally no notice seem easy.

You clean up their messes, and don’t get thanked

Long ago, in a previous, pre-baby, pre-university, pre-career life, I spent a summer working as an admin monkey in an NHS HR department. And one of my most joyful tasks was sorting out their filing system – and actual, old-school, paper filing cupboard. For years, things had been thrown in seemingly entirely at random, and it had reached the caricature-y point of spouting paper at you as soon as you opened the door. I spent weeks with that cabinet. I found papers dating to 1978. I filed, and shredded, and sorted. And nobody ever even acknowledged this.

I often think of this when my son throws all his food off his high chair tray and then throws up on the floor.

Ah, the fateful to-do list. I used to keep mine as a draft email so I could add and remove things to it at will, but there were some tasks that never seemed to get done. They just sat there. For months. It wasn’t because I couldn’t be bothered to do them (most of them, anyway) – it was just that my superiors didn’t care about the niggling admin tasks or “nice-to-dos” that I was perpetually hoping to get the time for. They wanted me to do this bright new shiny thing, and to do it RIGHT NOW.

My son’s the same. He doesn’t care how much washing I need to get through, or how much work I have to do, or for the fact that I need some basic sustenance to keep myself alive. He wants me to pick him up, and he wants me to do it NOW.

You’re sometimes doing their job for them

If there’s one complaint I’ve heard many a time from basically everyone I know who’s ever had a job, it’s that at some point they’ve ended up doing their boss’s job for them. Sometimes it’s official – holiday cover, or “acting up” during a period of leave or sickness – but more often than not, it’s just sort of happened. Somehow, sneakily, these bosses have managed to Jedi mind trick their employees into doing the work that they just can’t be bothered with. Or they’re a bit useless, and didn’t realise said work needed doing. One or the other.

Babies are masters of this trick. Why would they play with their own toys when they can just sit there and watch you making a fool of yourself with a variety of puppets in the name of keeping them entertained? Why do basic things like stack their own cups up when you can do it for them? Why cover their mouth when they cough, when you’re there? Sure, some would argue that it’s because they lack the basic motor skills, but I’m not convinced. My son can definitely grab something when he wants it – and more often than not, that ‘something’ is the food off my plate.

So yes, it seems that my new life as a freelancing mother has more in common with my old life as a corporate worker than I first considered possible. But there’s one distinct advantage to my new work set-up; my son gives me grins and cuddles and love that would deeply inappropriate from a workplace superior.

And he looks a lot cuter with banana all over his face.

Like this? Share it, and spread the MOLO love! You can read Jacki’s last blog The Mum Cliches I Swore I’d Never Do or for the latest from The Motherload®, head to our homepage