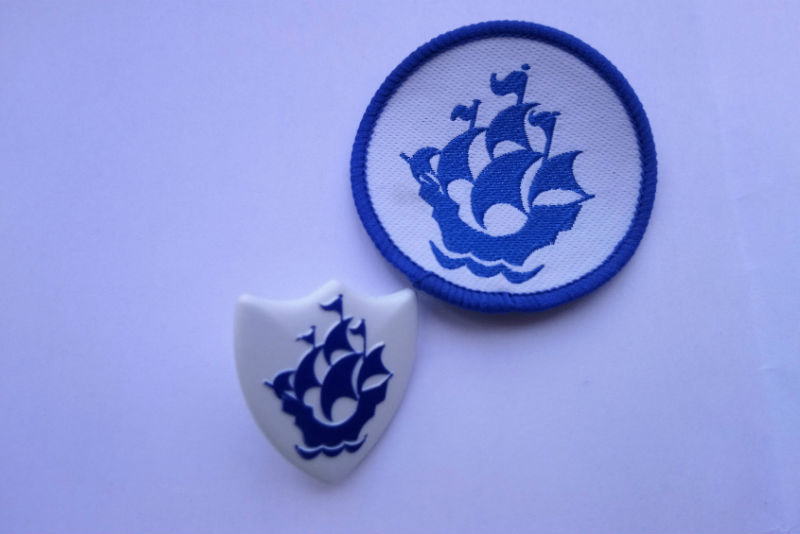 As a child I longed for a Blue Peter Badge. Most kids had their eye on that little badge with its brilliant blue sails and golden pin but mine was the kind of yearning that’s still hard to articulate now.

The best way I can explain it is that my heart used to knock harder in my chest when I saw one on the screen. I’d get the iron taste of an adrenalin rush from thinking about pinning it to my Athena ‘man holds a baby’ t-shirt. When I saw kids being awarded theirs for outstanding achievements like saving a drowning man or building an adapted road for hedgehogs to cross, I wanted to reach in to the TV and snatch it out of their grubby hands.

In fact, I wanted a Blue Peter badge so much that I pulled some twattish stunts to get one when my 20 page comic novel failed to catch John Noakes’ eye: teaching our family cat to tap dance, opening a counselling tent in my back garden, age 10, to assist adults with marital problems and door to door sales of stones. Not semi-precious ones, I’m talking chunks off the rockery. Unsurprisingly, I never got my badge.

In my twenties I was a social worker with young people and there was an attempted suicide that would undoubtedly have resulted in death had I not cracked on with it. Later, my manager said: ‘You deserve a Blue Peter badge, Ray.’  I stood there feeling emotional and rinsed out after hours at the girl’s bedside with her blood soaked in to my clothes and I experienced this starkly defining moment related to age and time and the glass-blown frailty of life, and I realised that I was actually now far too old for a Blue Peter badge. Too fucking old for a Blue Peter badge! I’d never get one, after all. It was a significant moment but that moment passed, as big moments do, and I forgot all about Blue Peter badges until my son started watching the programme this summer. I quickly noticed that same yearning in his earnest eyes when he watched the children being awarded their badges. I resolved to help him get one.

We had a serious bash at the BIG Badge Boat bonanza but I’m no crafty mum so it all went to shit fairly quickly and I realised I’d lost any skill for engineering years back when I managed to make a paper mache Tracy Island look like Steve Martin’s dog. Irritated, I wrote to Blue Peter directly to tell them about our crafting difficulties and my son illustrated a beautiful poster to accompany it. Here’s an extract:

‘Three dissected cardboard boxes later, I had shards of cornflake between every toe and a carpet of granulated Shreddies underfoot. My two year old was crying hard because he wanted the stripy cornflake bowl on the front of the box to be stuck back together and my eldest wanted to know how to attach the sails but I was still stuck on Step 5: Use the left over length of card from step 3 to create the decking because there was no leftover card. Simply put, we couldn’t proceed. We couldn’t proceed because there was no leftover card from Step 3 and the Pritt Stick wouldn’t stick jack shit down.

… There’ll be no point wearing our boat shoes on the Blue Peter boat without any decking, will there?… no point wearing the pro-race sailing caps either but that’s ok because they slip over my eye after a sundowner or two, making me feel like a pissed up Captain Birdseye.’

Imagine my delight on returning from our family holiday to find that Blue Peter had written back to me with this fantastic response (an excerpt):

‘Thank you for your entertaining email… We certainly agree that standard glue sticks aren’t very strong when it comes to sticking types of cardboard and sorry to hear about the mess the dissected cereal boxes caused! … As far as badges go, we can only award them to children aged 6-15 but we are enclosing a Blue Peter Cloth Emblem for your determination and perseverance with this make instead.’

Not only that but my son had received a Blue Peter Badge for his poster so we’re planning to throw ourselves down a reduced-price log flume sharpish.

All this nostalgic waffle about Blue Peter badges might be trivial, and some might think it horribly self-indulgent, but there’s something restorative about it for all the mothers out there, and the dads, and all the children wanting a little something, be it a pin badge or a bog standard cup of tea without a toddler present or a full night’s sleep or something far bigger and more significant: hold on to that hope tightly because you might just get it (even if you do have to wait decades.)

Like this? Share it, and spread the MOLO love. You can read Rachael’s last brilliant blog Femsplaining: Dating for Blokes or for the latest from The Motherload®, head over to our homepage